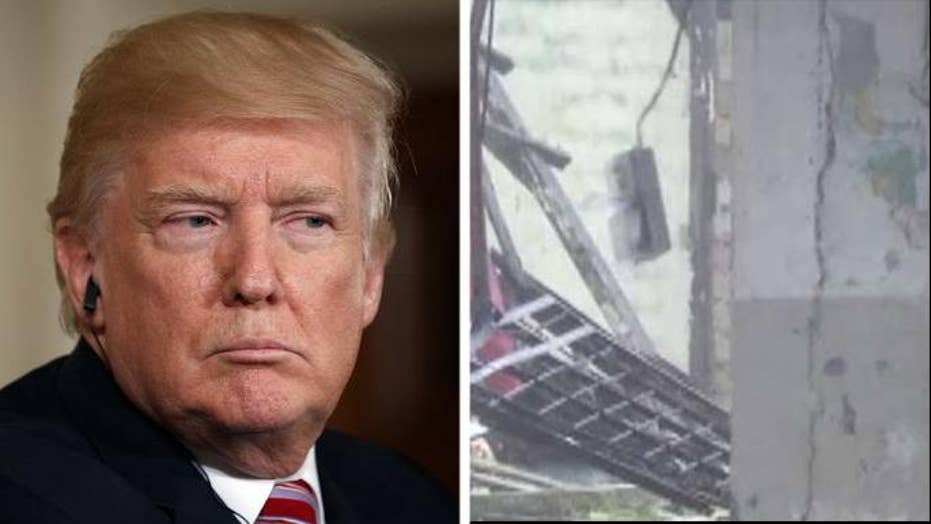 Trump meets with Cabinet members at Camp David during Irma

President Trump is meeting this weekend with Vice President Pence and other Cabinet members at presidential retreat Camp David where they will monitor and respond to Hurricane Irma’s strike on South Florida and address the administration’s legislative agenda.

The Category 4 hurricane was over the Florida Keys on Sunday morning.

The White House says first lady Melania Trump and the wives of Cabinet members will join the president at the western Maryland retreat.

But the trip will be a working visit like the one Trump had two weekends ago when monitoring Hurricane Harvey’s destructive path through southeast Texas and Louisiana -- talking to officials in the field and consulting with Cabinet members in video-equipped, table-top discussions.

The White House said Friday that all 23 Cabinet members have been invited and that Trump will stay through Sunday.

Trump and his team will also receive briefings about Harvey recovery efforts.

The Cabinet meeting Saturday afternoon was the president’s fourth since taking office.

Trump arrives at the western Maryland retreat after what is considered his first major legislative win, Congress on Friday approving $15.3 billion in Harvey disaster-relief aid linked to an increase in the government's borrowing authority.

Treasury Secretary Steven Mnuchin and White House Budget Director Mick Mulvaney -- two Cabinet members -- had a rough time Friday when they went to Capitol Hill before the vote to sell the deal.

Mnuchin elicited hisses when he urged the meeting of House Republicans to "vote for the debt ceiling for me," said Rep. Mark Walker, R-N.C.

Mulvaney, a former Tea Party congressman from South Carolina, was booed when he stepped to the microphone, though lawmakers said it was good-natured.

Other top administrative priorities expected to be discussed this weekend include Trump’s tax reform plan and North Korea leader Kim Jong Un’s ongoing development of nuclear weapons and an intercontinental missile to deliver such warheads to foreign nations.