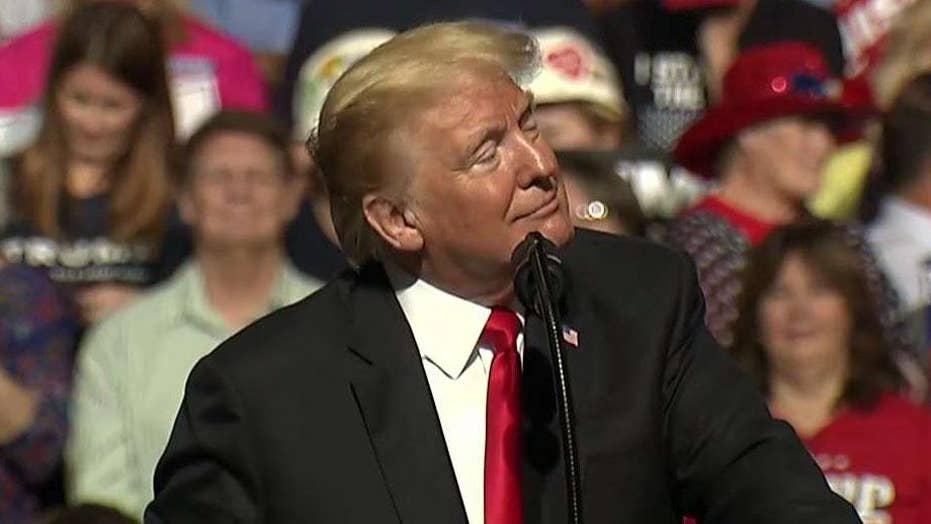 President Trump calls Judge Kavanaugh one of the 'best legal minds of our time.'

President Trump on Saturday evening clarified the parameters for an FBI investigation he ordered into the sexual assault allegations against Supreme Court nominee Judge Brett Kavanaugh.

Previous media reports said the FBI probe would be limited in how many accusers the agency would interview regarding Kavanaugh’s past – but the president wrote Saturday that he had placed no such barriers on investigators.

Trump’s message, tweeted after his “Make America Great Again” rally in Wheeling, W. Va., targeted a report by NBC News, though the Wall Street Journal had reported a similar story.

“NBC News incorrectly reported (as usual) that I was limiting the FBI investigation of Judge Kavanaugh, and witnesses, only to certain people,” the president wrote. “Actually, I want them to interview whoever they deem appropriate, at their discretion. Please correct your reporting!”

The president’s message, however, did not address the timeframe of about a week that the FBI had been given to complete its “supplemental investigation,” ordered in the wake of Thursday’s Senate Judiciary Committee testimony by accuser Christine Blasey Ford and Judge Kavanaugh.

NBC and the Journal had reported Saturday that a White House official had stated that the FBI would investigate the claims against Kavanaugh made by accusers Ford and Deborah Ramirez, but would not examine the claims made by Julie Swetnick, who like the others had asserted that Kavanaugh engaged in sexual misconduct during his high school years.

Neither Ramirez nor Swetnick participated in Thursday’s hearing on Capitol Hill.

But Trump’s statement late Saturday suggested that FBI personnel face no restrictions against interviewing Swetnick – or any other person they deemed relevant to the accusations against Kavanaugh.

Earlier, White House spokesman Raj Shah also contradicted the claims of limits on the FBI that were attributed to an unnamed White House official.

“The scope and duration has been set by the Senate," Shah told Fox News. "The White House is letting the FBI agents do what they are trained to do.”

"The White House is letting the FBI agents do what they are trained to do.”

Following the president’s late-Saturday tweet, NBC News reported Trump’s reaction to the network’s earlier story, and stipulated that the president had given the FBI “free rein” to conduct the investigation as it sees fit.

"Whatever it is they do, they’ll be doing — things that we never even thought of. And hopefully at the conclusion everything will be fine,” the president said, according to NBC.

"Whatever it is they do, they’ll be doing — things that we never even thought of. And hopefully at the conclusion everything will be fine.”

“If true, this is outrageous," Avenatti tweeted Saturday afternoon. "Why are Trump and his cronies in the Senate trying to prevent the American people from learning the truth? Why do they insist on muzzling women with information submitted under penalty of perjury? Why Ramirez but not my client?”

Later, Avenatti tweeted: “Trump has now determined that he and he alone will be the sole arbiter of whether a woman’s claims of sexual assault and misogyny are credible. Why even have an FBI investigation? I thought it was their job to make this determination. He and Kavanaugh are afraid of the truth.”