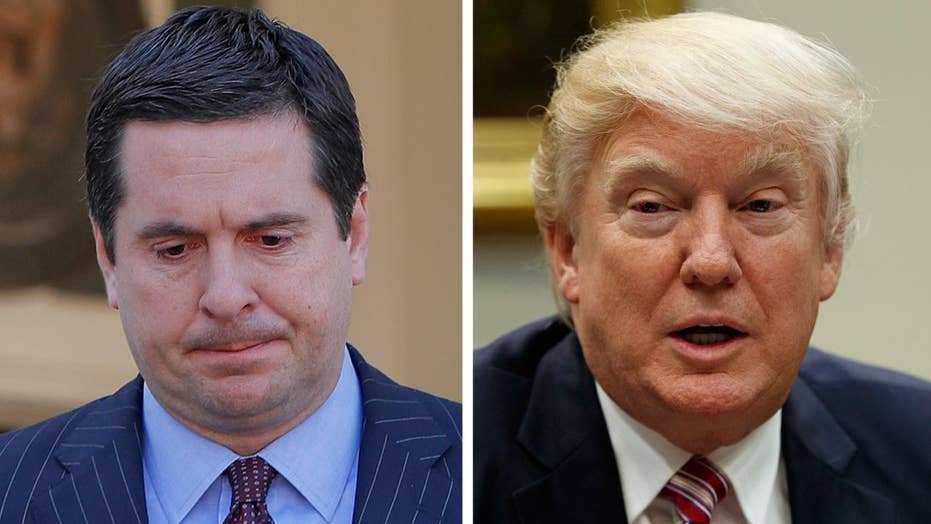 The announcement by a top lawmaker Wednesday that intelligence agencies disseminated surveillance on the Trump transition team is fueling President Trump’s push to root out those who allegedly spread the classified information throughout government and to news organizations.

House Intelligence Chairman Rep. Devin Nunes, R-Calif., said Wednesday a source within the intelligence community had shown him “dozens” of reports that were produced from “incidentally collected” communications between members of the Trump transition team and foreign targets.

Several individuals on the Trump team were eventually “unmasked” and had their identities “widely disseminated,” despite the information being of limited intelligence value, Nunes said. The bombshell news conference appeared to partially back up Trump’s assertion earlier this month that former President Barack Obama had “wiretapped” him.

“Wow … so that means I’m right,” Trump told Time magazine while reading another outlet’s article about the Nunes news conference.

While the intelligence appeared to have been legally collected and, Nunes said, based on a FISA warrant, Trump appeared particularly upset that members of his team had been identified in the intelligence reports -- something which is rarely supposed to happen.

At least one of those individuals, former National Security Adviser Michael Flynn, had information about his phone calls leaked to the press, leading to a scandal that ultimately resulted in his termination. The Flynn episode was just one in a series of politically damaging leaks that have hurt the nascent Trump White House.

He added: “And these people were here in the Obama years, because he had plenty of leakers, also.”

Trump appeared content that his claims had been supported by Nunes’ news conference, and he suggested additional information could emerge.

Trump cited his “instinct” for a string of self-proclaimed successes -- of which he said the surveillance claim was the latest.

“I’m a very instinctual person, but my instinct turns out to be right,” Trump said. “When everyone said I wasn’t going to win the election, I said, ‘Well, I think I would.’…I said, ‘No, Brexit is going to happen,’ and everybody laughed. And Brexit happened. Many, many things. They turn out to be right. And now, today, Devin Nunes just had a news conference.”