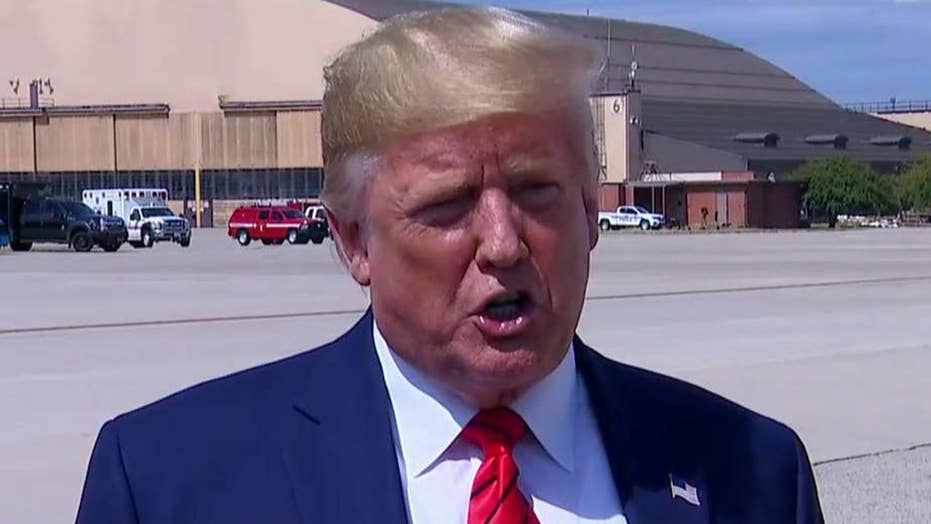 The White House and congressional Democrats moved into a state of total political war in the wake of this week's stunning document dumps, historic testimony and impeachment inquiry launch over President Trump's July phone call with the Ukrainian president.

With the transcript of that call and the related whistleblower complaint now public -- and the acting director of national intelligence giving his account to a House committee Thursday -- the battle between these two branches of government is truly joined. And neither side is giving an inch.

Trump and his allies are now ramping up their attacks on Democrats, the media, the whistleblower and the various sources who fed information on the president that made its way into the complaint. House Democrats, meanwhile, are moving full speed ahead with the formal impeachment inquiry announced earlier this week, with reports indicating lawmakers plan to move quickly with their investigation -- raising the possibility of articles of impeachment before year's end.

"The presidential oath of office requires the President of the United States to do two things: Faithfully execute his or her office, and protect and defend the Constitution. The whistleblower complaint and call record provide the most graphic evidence yet Trump has done neither," House Intelligence Committee Chairman Adam Schiff tweeted. 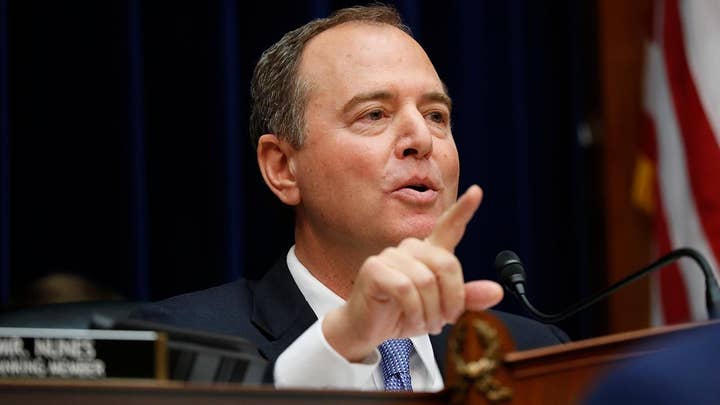 All this has played out in a matter of days, with the Ukraine controversy spurring Democratic leadership into impeachment action in a way the Russia controversy did not. The White House, for its part, spent most of the week trying to clear the air. It released a transcript of the call with Ukrainian President Volodymyr Zelenksy showing Trump urging his Kiev counterpart to "look into" former Vice President Joe Biden and his son—a move Democrats claim was Trump seeking assistance from a foreign power in the 2020 presidential election. The now-released whistleblower complaint on the same call included additional allegations, including claims that officials tried to hide records of the call.

But the president and his legal team are fighting back by likening the whistleblower and his or her sources to spies -- and questioning whether this is all the work of partisans.

"Sounding more and more like the so-called Whistleblower isn’t a Whistleblower at all. In addition, all second hand information that proved to be so inaccurate that there may not have even been somebody else, a leaker or spy, feeding it to him or her? A partisan operative?" Trump tweeted Friday.

He also blasted media coverage, including the New York Times' Peter Baker for his latest reporting on the call.

And he demanded the resignation of Schiff, D-Calif., for "fraudulently" reading out a hyperbolic account of his phone call with the Ukrainian president during a hearing on Thursday.

Trump began raising questions about the whistleblower on Thursday.

“I want to know who’s the person, who’s the person who gave the whistleblower the information?” Trump said, according to audio of his remarks at a private event in a New York hotel obtained by the Los Angeles Times. “Because that’s close to a spy.”

He added: “You know what we used to do in the old days when we were smart? Right? The spies and treason, we used to handle it a little differently than we do now.”

“Do you think the whistleblower drafted the complaint? I mean realistically?” Sekulow said on “Fox & Friends.” “Look at the phraseology, the endnotes, and the footnotes—this wasn’t drafted by this individual. This was written by a law firm. The American people see it as it is. Nobody has an appetite for this anymore.”

Sekulow blasted the fallout surrounding the controversy as “political theater.”

“There is no there, there,” he said. “There was no violation of law, rule or regulation.”

On Thursday, acting Director of National Intelligence Joseph Maguire testified publicly before the House Intelligence Committee. Despite being pressed for hours by Democrats, Maguire maintained that the whistleblower complaint was “hearsay” and “second-hand” information—a sentiment Sekulow echoed Friday.

Sekulow also responded to allegations the White House moved call records from a computer system where they are normally kept to a system normally used for classified information.

“A cover-up? Think about that for a moment. The White House secured a call with the president of Ukraine? It’s so secret, and such a cover-up, here’s the documents,” Sekulow said. “This is nonsense.”

The transcript itself showed Trump pressing Ukraine to investigate the Bidens. Joe Biden has acknowledged on camera that, when he was vice president, he successfully pressured Ukraine to fire the prosecutor, Viktor Shokin, who was investigating the natural gas firm Burisma Holdings — where Biden's son Hunter had a highly lucrative role on the board. Biden supporters say Shokin was widely accused of corruption.

While the transcript shows Trump pressing Ukraine to “look into” the Bidens, it does not show the U.S. president explicitly linking that request to U.S. aid — which had been frozen days earlier, a detail that fueled impeachment calls earlier this week and helped prompt House Speaker Nancy Pelosi to announce a formal impeachment inquiry Tuesday.

Trump allies, like Sekulow, and others in the White House, have used that distinction to maintain the claim that “there was no quid pro quo.”

Meanwhile, the whistleblower also alleged that Trump’s personal attorney Rudy Giuliani, whom the president mentioned on the call could help Zelensky in any anti-corruption probes, was improperly involved in soliciting foreign interference in the 2020 presidential election.

Giuliani, though, defended his involvement, telling Fox News’ Laura Ingraham, “I think I should get some kind of an award.”

“What they charged as Russian collusion was really Ukrainian collusion,” Giuliani said on “The Ingraham Angle” Thursday night. “I am doing an effective job of showing what phonies they are and I am uncovering what you will find to be an enormous pay for play scheme.”

Giuliani also told the Atlantic on Thursday that he thinks he deserves praise for his involvement with Ukraine.

But Democrats are using all of the developments as fodder as they hit the gas pedal in their impeachment proceedings. Pelosi said Friday that she did not have an exact timetable for impeachment, though noted that it could “take time.”

Pelosi also noted that the House committees involved in the process are going to probe the “cover-up” allegations while saying that Trump’s comments about the whistleblower have been “dangerous.”

“For the president to say what he said about those who may have supplied information to the whistleblower seriously undermines integrity in government,” Pelosi said Friday. “But the president does that almost every day.”

The House and Senate are on recess for the next two weeks, but members plan to use this period to speak to constituents and garner support for the process.

“Congress ought to be talking to their constituents and gaining their perspective on that and why they think this is such an important facet of this ongoing investigation,” House Majority Leader Steny Hoyer, D-Md., said. “I think consideration of the public’s viewpoint is critically important.”