Top Republicans on Thursday pushed to identify the White House officials who told a whistleblower of alleged misconduct by the Trump administration, as Democrats ramped up their impeachment inquiry -- and several apparent inconsistencies emerged in the whistleblower's complaint.

"Let's find out," Biggs said when Smith asked if he wanted to see the whistleblower's sources.

The whistleblower's complaint, released earlier in the day, contained no firsthand accounts of wrongdoing. It cited information from White House officials who alleged there'd been efforts to hide Trump's July phone call with Ukrainian President Volodymyr Zelensky, among other conversations. The Trump administration reportedly began placing transcripts of Trump's calls with several foreign leaders in a highly classified repository after leakers publicly divulged the contents of Trump's private calls with the leaders of Mexico and Australia in 2017.

The complaint stated that Trump made a “specific request that the Ukrainian leader locate and turn over servers used by the Democratic National Committee (DNC) and examined by the U.S. cybersecurity firm CrowdStrike" -- a request that does not appear in the declassified transcript of the call released by the Trump administration on Tuesday. Trump mentioned CrowdStrike, but did not demand the server.

And according to the whistleblower complaint, by mid-May, U.S. diplomat Kurt Volker sought to "contain the damage" from Trump attorney Rudy Giuliani's outreach to Ukraine.

But a July 19 text message conversation from Volker to Giuliani, provided to Fox News on Thursday, showed that Volker had in fact encouraged Giuliani to reach out to Ukraine -- even sending Giuliani a message reading, "connecting you here with Andrey Yermak, who is very close to President Zelensky."

A screenshot of a text message conversation in July between U.S. diplomat Kurt Volker and Trump attorney Rudy Giuliani.

Additionally, the complaint said Trump "suggested that Mr. Zelensky might want to keep" his current prosecutor general, a claim not supported by the transcript.

CBS News reported late Thursday that the whistleblower complaint further inaccurately claimed that a State Department official was on the call with Zelensky.

The memo was not a "verbatim transcript" but was based on "notes and recollections" of those memorializing the call. 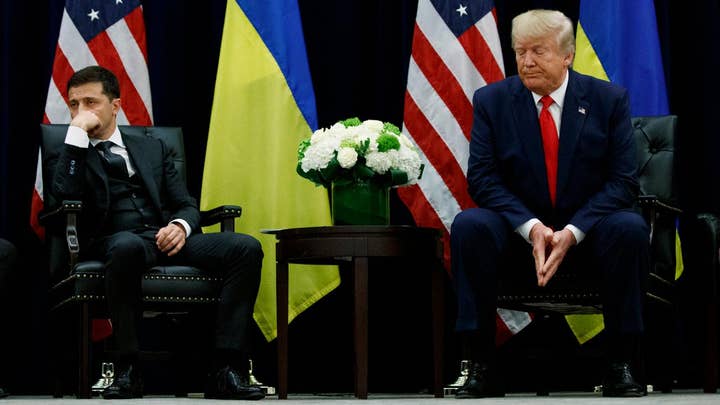 "It is imperative we find out which White House official talked to the whistleblower and why. Why didn’t they lodge the complaint?" he asked on Twitter.

"When I think of whistleblower complaints I generally think of someone with first-hand knowledge of the events in question," Graham added.

Trump, for his part, reportedly threw his support behind an inquiry into the whistleblower's sources.

"I want to know who's the person, who's the person who gave the whistleblower the information? Because that’s close to a spy," Trump said, according to audio of his remarks at a private event in a New York hotel obtained by The Los Angeles Times. "You know what we used to do in the old days when we were smart? Right? The spies and treason, we used to handle it a little differently than we do now."

Among the whistleblower's most explosive accusations was that "White House officials who heard" Trump's July call with Zelensky were "deeply disturbed" by it, and that White House lawyers discussed how to handle the call "because of the likelihood, in the officials' retelling, that they had witnessed the president abuse his office for personal gain."

The complaint cited "multiple White House officials with direct knowledge of the call."

The complaint went on to raise the specter of a cover-up. It said, "In the days following the phone call, I learned from multiple U.S. officials that senior White House officials had intervened to 'lock down' all records of the phone call, especially the official word-for-word transcript of the call that was produced -- as is customary -- by the White House Situation Room."

Trump administration officials allegedly said White House attorneys "directed" them to remove the transcript of the call from the computer system where they normally were kept, according to the complaint. Instead, the transcript allegedly was kept on a  system normally used for classified information. The whistleblower said that, according to White House officials, it was "not the first time" a presidential transcript was placed into this system in order to protect politically sensitive information and not national security-sensitive information.

Acting Director of National Intelligence Joseph Maguire, in tense testimony Thursday on Capitol Hill, defended his handling of the whistleblower complaint, while calling the matter "unprecedented." 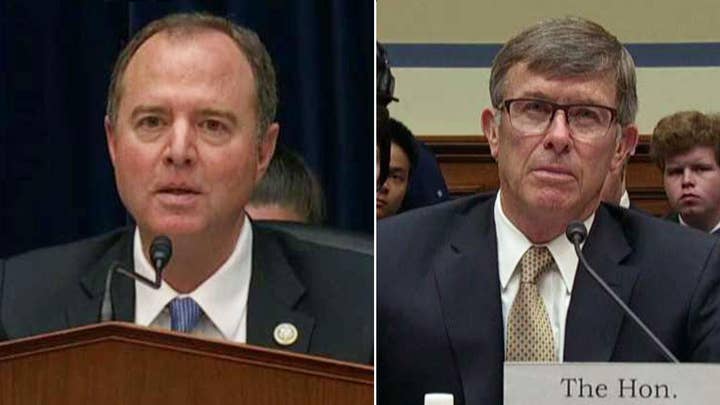 But after maintaining his composure for most of the morning, his frustration showed through at the end, when House Intelligence Committee Chairman Adam Schiff, D-Calif., repeatedly pressed him to agree that the matter needed to be investigated.

Maguire stressed that the committee had all of the relevant information, including the whistleblower complaint, released publicly Thursday morning, and said it's up to its members to decide how to proceed.

Maguire also stressed that the complaint essentially was "hearsay," not "corroborated by other folks."

On Wednesday, the White House released a transcript of Trump's July call with Zelensky, showing Trump sought a review of former Vice President Joe Biden's efforts to have Ukraine's former top prosecutor fired. Zelensky, speaking with Trump later in the day, said he did not feel pressured at all during the call to investigate Biden.

Joe Biden has acknowledged on camera that, when he was vice president, he successfully pressured Ukraine to fire the prosecutor, Viktor Shokin, who was investigating the natural gas firm Burisma Holdings — where Biden's son Hunter had a highly lucrative role on the board.

Biden supporters say Shokin was widely accused of corruption. On the flipside, critics charged that Hunter Biden essentially might have been selling access to his father, who had pushed Ukraine to increase its natural gas production.

Trump made the request on the call for Ukraine to look into the Bidens after Zelensky first mentioned Ukraine's corruption issues, and after Trump separately requested as a "favor" that Ukraine help investigate foreign interference in the 2016 elections, including the hack of the Democratic National Committee (DNC) server involving CrowdStrike.

The call came not long after Trump had frozen millions of dollars in military aid to Ukraine. However, the aid was later released to Ukraine, and the Ukrainians were unaware the money was frozen in the first place until more than a month after Trump's call with Zelensky, according to The New York Times.