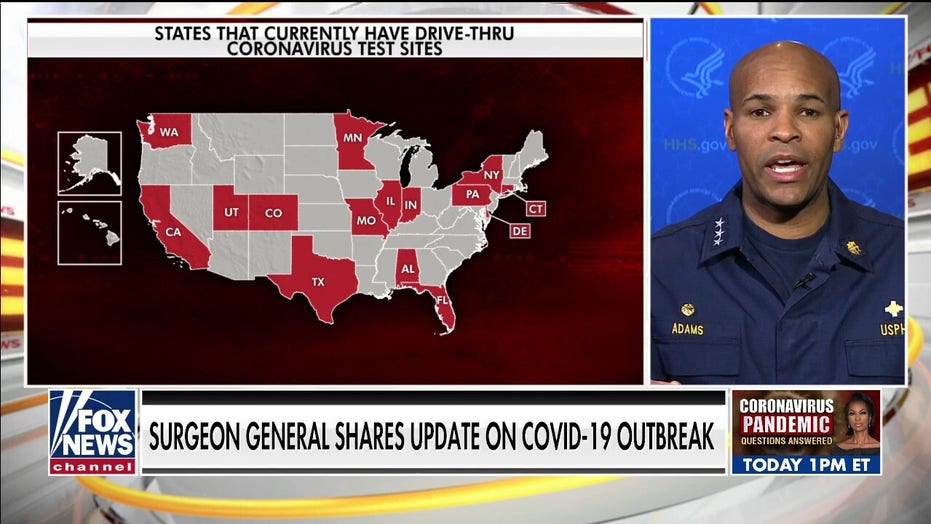 U.S. Surgeon General on who gov't will prioritize for coronavirus testing

Surgeon General Dr. Jerome Adams provides an update on COVID-19 testing and what segment they will be focusing on first

Trump administration officials say a foreign disinformation campaign is trying to spread fear amid the coronavirus pandemic, with false rumors of a nationwide quarantine and more.

A senior administration official told Fox News on Monday that it is imperative to ensure the information about the novel coronavirus is coming from verified outlets.

“There is an ongoing effort to spread disinformation and cause undue panic,” the official told Fox News, specifically referring to the rumors of a nationwide quarantine. “There is no national quarantine for the United States.”

The official added: “It’s important we remain vigilant in ensuring our information is coming from verified sources.”

The Associated Press reported that federal officials are describing the disinformation as part of a deliberate effort by a foreign entity to sow fears inside the U.S., though they did not specify which foreign entity may be involved.

“There is no national lockdown,” the NSC tweeted. “@CDCgov has and will continue to post the latest guidance on #COVID19. #coronavirus.”

“Hey folks, we’re not shutting down the United States,” Cuccinelli tweeted Monday. “Lots of serious mis-information being peddled out there!”

“This is not correct,” Miller tweeted in response to a reporter on Twitter.

Meanwhile, the Department of Health and Human Services reportedly was hit with a cyberattack on Saturday. Bloomberg first reported the attack, which was aimed to slow the agency’s computers. Bloomberg reported that the attack did not have any meaningful impact but was part of broader "disruption and disinformation" efforts. The NSC tweet reportedly was related to the hack and disinformation concerns.

One source told Fox News that the attack was “likely” a “state-sponsored attack.”

The warnings come as the nation, and the world, grapple with the novel coronavirus, which causes COVID-19. The World Health Organization designated the virus as a global pandemic last week.

President Trump announced a national emergency on Friday. The president also announced a temporary halt on air travel to the United States from Europe, now including flights from the United Kingdom, but excluding those carrying cargo.

The Federal Reserve also slashed interest rates to near zero and said it would buy $700 billion in Treasury securities in an aggressive step to insulate the U.S. economy from the pandemic.

As of Monday morning, there were more than 3,700 confirmed cases of coronavirus in the United States, in 49 states, including Washington, D.C. The U.S., so far, has seen 68 coronavirus-related deaths.

According to WHO, people with mild illness recover in about two weeks, while those with more severe illness may take three to six weeks to recover.