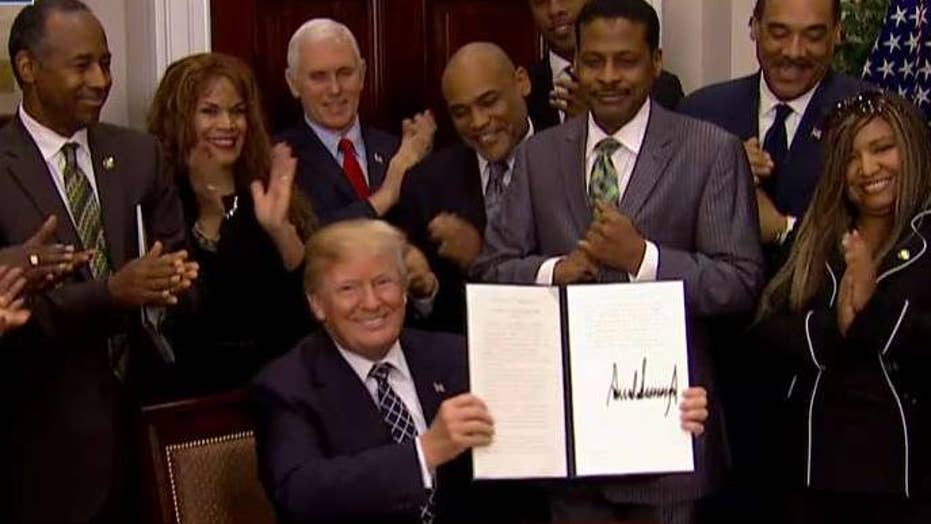 At a wreath-laying ceremony at the MLK Jr. Memorial in Washington, FBI Director Chris Wray and Interior Secretary Ryan Zinke praised King and said his words were just as important today.

“Dr. King understood no man is an island and that we rise and fall together,” Wray said. He noted that “whatever effects one directly effects all indirectly,” listing violent crime, discrimination and hatred.

“We have made progress as a nation over the last 50 years, but it isn’t enough,” he said. “We still haven’t reached that mountain top that Dr. King referenced so eloquently.”

Wray said that the FBI was determined to “ensure fairness and equality,” and “foster diversity” to “better reflect the communities” they serve.

“[Our job at the FBI] is simple and profound. To protect the American people, and uphold The Constitution, and to follow the facts independently wherever they may lead,” he said, adding that “protecting civil rights and observing civil liberties” was “at the heart” of everything the bureau does.

Wray announced that the FBI now requires every new analyst and agent in training to take a course specifically dedicated to King, and to “visit this memorial” to “understand how we can better do our jobs.”

“We will only continue to make progress as we continue to move forward together,” he said. “One day we will reach that mountain top together.”

Zinke told the crowd that King’s dream was “highly rooted in the dream of all Americans.”

“His dream was a fully integrated American for all people, all faiths, genders, religions,” he said. “We all have the obligation to make sure our fight for justice, equality –the battle that we face every day—is fought and won because it is deeply rooted in us as a people.”

Over the weekend, Vice President Pence and his wife visited the memorial for a private wreath laying.

“Honored to lay a wreath at MLK Jr. Memorial w/ @SecondLady,” Pence tweeted. “He was a great American leader who inspired a movement & transformed a Nation. He took the words of our Founders to heart to forge a more perfect union based on the notion all men are created equal & in the image of God.”

“Dr. King's dream is our dream,” Trump said. “It is the American Dream. It's the promise stitched into the fabric of our Nation, etched into the hearts of our people, and written into the soul of humankind."

He spent the day at his Florida resort, Mar-a-Lago, and the Trump International Golf Course in West Palm Beach.

Trump signed a Martin Luther King Jr. proclamation last week, amid criticism over comments he made Thursday at an Oval Office meeting on immigration with seven lawmakers in which he questioned why people from "sh--hole" countries like Haiti, Honduras, and African countries come to the United States.

"When a president insists that our nation needs more citizens from white states like Norway, I don't even think we need to spend any time even talking about what it says and what it does," King said. "We got to find a way to work on this man's heart."

Other critics have denounced Trump and accused him of being a racist. On Sunday Trump told reporters that he was "not a racist." He also has denied making those comments.

"Today we honor Dr. Martin Luther King Jr. & his service to this great country. I am honored to be First Lady of a nation that continually strives for equality & justice for all. #MLKDay," the first lady posted on her Twitter page.