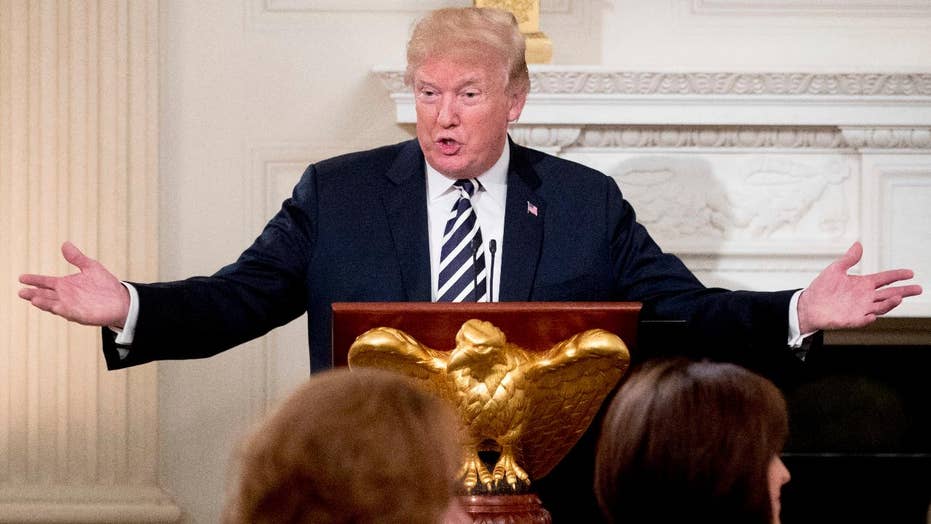 Allies are fuming towards President Trump ahead of G7 summit in Quebec City, Canada. Fox Business Network's Ashley Webster has the latest on the upcoming meeting between several world leaders.

On the eve of what is expected to be a tense, in-person meeting between the leaders at the G7 summit in Quebec, President Trump publicly took aim at Canadian Prime Minister Justin Trudeau and French President Emmanuel Macron for imposing “massive” economic burdens on the United States.

“Please tell Prime Minister Trudeau and President Macron that they are charging the U.S. massive tariffs and create non-monetary barriers,” Trump wrote on Twitter Thursday. “The EU trade surplus with the U.S. is $151 Billion, and Canada keeps our farmers and others out. Look forward to seeing them tomorrow.” (Factoring in services-related trade, such as financial and legal services, the E.U.'s trade surplus with the U.S. is closer to $100 billion.)

Trump fired off another testy tweet two hours later: "Prime Minister Trudeau is being so indignant, bringing up the relationship that the U.S. and Canada had over the many years and all sorts of other things...but he doesn’t bring up the fact that they charge us up to 300% on dairy — hurting our Farmers, killing our Agriculture!"

As those negotiations have stalled, discussions between Canada and U.S. turned more pointed.

Earlier this month, the White House announced that it would no longer exempt Canada, the E.U., and Mexico from punishing tariffs on steel and aluminum, citing national security and concerns of unfairness.

The move led Canada and the E.U. to impose retaliatory measures. Canada vowed to hit the U.S. with nearly $17 billion worth of tariffs on various goods from the U.S., such as toilet paper and maple syrup, and the E.U. announced planned duties as well.

That’s because Trudeau and Macron are expected to reiterate their previous messaging at the G7 summit, and claim that Trump’s tariffs will hurt American workers and damage the U.S.’ image internationally.

“American jobs are on the line because of his actions and because of his administration,” Trudeau said at Parliament Hill in Ottawa on Thursday. “When we can underscore this, and we see that there’s a lot of pressure within the U.S., perhaps he will revise his position.”