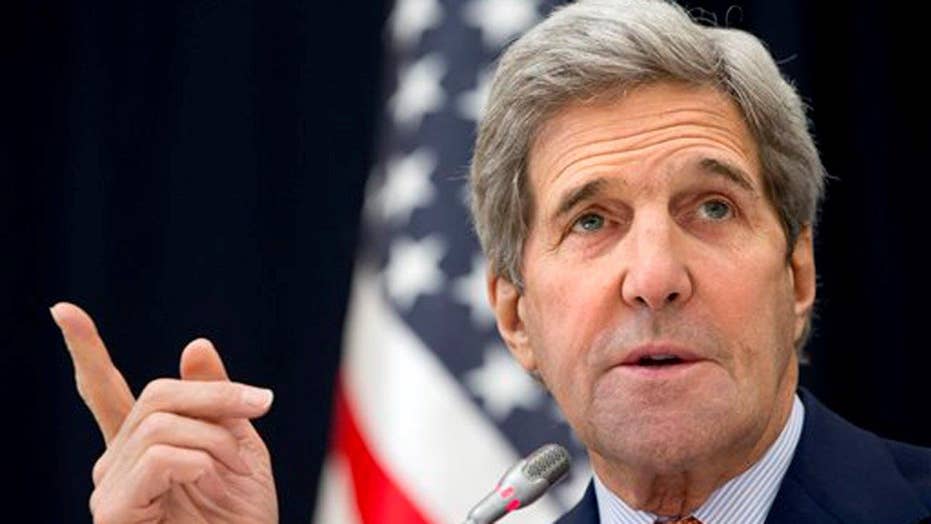 Dr. Sebastian Gorka provides insight as the Secretary of State attempts to reassure our allies

The chairman of the House Foreign Relations Committee demanded Wednesday that Secretary of State John Kerry explain a $1.7 billion settlement paid to Iran that some Republicans have described as a "ransom" tied to last month's release of five American prisoners.

Rep. Ed Royce, R-Calif., complained in a letter to Kerry that his committee was not consulted about the payment. The Obama administration claimed the agreement was made to settle a dispute with Iran over $400 million in frozen funds that dated back to 1979. The remaining $1.3 billion was described by the Obama administration as "interest".

"It is unclear how this $1.7 billion payment is in the national security interests of the United States," Royce wrote.

Royce's letter included 10 questions to Kerry about the settlement. Among them are how the administration calculated the $1.3 billion "interest" on the payment, a timeline of negotiations over the payment since this past summer's nuclear deal, and why the money was not used to "compensate American victims of Iranian terrorism who have been awarded judgments against Iran."

Royce's letter also asks for a list of U.S. officials who participated in negotiations with Iran over the payment, the prisoner release and the nuclear agreement.

At the time, Obama defended the amount paid by the U.S., saying it was "much less than the amount Iran sought." The president added that the one-time payment was preferable to letting more interest accumulate while waiting for a judgement from the Iran-US Claims Tribunal, which is based in The Hague and was created in the deal that ended the Iran hostage crisis in 1981.

"I have a larger concern that in choosing to resolve this relatively minor bilateral dispute at this time, the Obama Administration is aggressively moving towards reestablishing diplomatic relations with Iran," Royce wrote. "Such action would clearly violate the President’s pledge to 'remain vigilant' in countering the threat Iran poses to the United States and our allies in the region."

"As with all Congressional correspondence, we'll respond as appropriate," Kirby said. Royce's letter gives Kerry until Feb. 17 to respond to his questions.