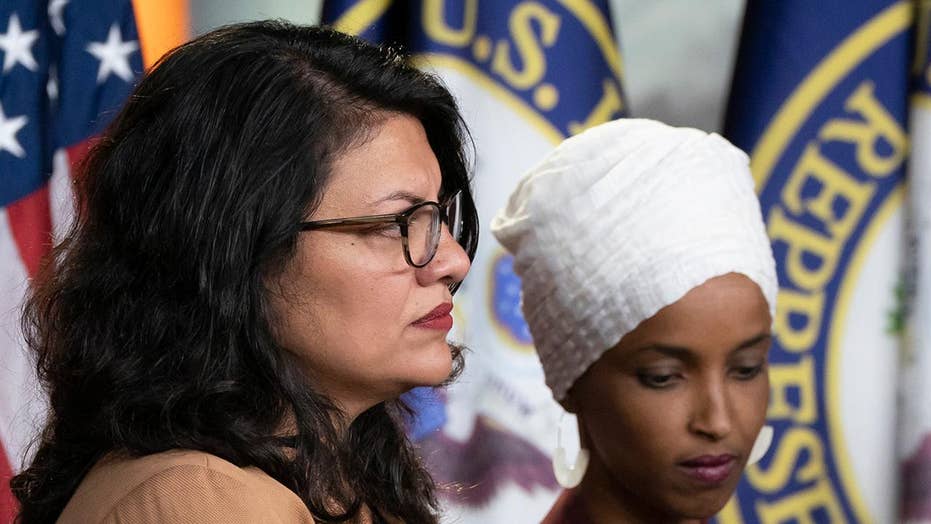 The BDS movement seeks to delegitimize the existence of Israel and progressive 'Squad' member Rep. Rashida Tlaib embraces that, says Dr. Qanta Ahmed, member of the Council on Foreign Relations.

DETROIT -- As the Democratic 2020 hopefuls prepare to take the stage for two nights of primary debates here in Michigan, one member of the “Squad” is keeping candidates’ feet to the fire about a top issue for the party’s left-wing base -- taxing the rich.

Rep. Rashida Tlaib, D-Mich., spoke at a “Tax the Rich” rally near the site of Tuesday night’s debate, where the question of how to pay for their ambitious spending proposals dealing with poverty, infrastructure, climate change and health care will likely be a thorny issue for participants.

Afterward, the Detroit native told Fox News that she was very interested to see how bold the candidates will be in their calls to end poverty in places like the Rust Belt.

“Right now, I represent the third poorest congressional district so I’m right at the forefront,” she said. “So when they say things have gotten better or when some candidates are pushing back against any kind of bold approach to ending poverty in our country, it's that right now in Michigan, just recently, it has increased poverty among children, the fact that General Motors is leaving and the trade debacle that this current administration has created -- where do they stand on those?”

She said pensions and pension funding are another key issue, and also urged the Democratic hopefuls to put people "before corporations" -- warning that she would be paying close attention to candidates’ prior records rather than their debate performance, and whether their actions have matched their words.

“And you look at the Midwest, it was shocking to see many of our folks and precincts that have never been red before go red, but that’s because people need to feel heard and need to feel seen and the way you do that is making sure they come before corporations,” she said.

“So you know I’m always going to look at a person’s previous voting record, what they proposed before, because many of them have actually held office before, they’ve actually been in positions of power where they could have introduced these plans they are now proposing now -- so I want to look at that more than their performance,” she said.

Tlaib, who along with Reps. Alexandria Ocasio-Cortez, D-N.Y., Ilhan Omar, D-Minn., and Ayanna Pressley, D-Mass., form the left-wing group of freshman congresswomen known as the “Squad,” made her speech in front of a giant inflatable Trump chicken and near a green “Tax the Rich” bus. That bus is completing a tour through America’s heartland that began at the last Democratic debate in Miami.

In her remarks, she focused her anger on the 2017 tax cuts signed into law by President Trump that she said had hurt poor Americans, claiming that the top 1 percent of Michigan residents got an average tax cut of $52,000, while the poorest will pay $120 more.

“Wages barely moved, jobs aren’t being created and instead CEOs are giving themselves bigger bonuses and buying back stock, but we know this is nothing new, it is our time to end corporate influence over our government and unrig the tax system,” she said.

She made her remarks opposite Comerica Park, the home of the Detroit Tigers, and cited it as an example of how funding priorities were misplaced.

She said that an “overwhelming majority” of Americans back taxing the rich, claiming that she has seen support from Republicans as well as Democrats: “They all say it has to be fair and it is not fair when we continue to allow corporate greed to drive away our getting closer to access to a real humane health care system, to a real quality school system for our children and so much more.”

“I’ve actually met millionaires who are like ‘please tax me!’” she said. “Well, we're here to say we’re willing to tax you today.”