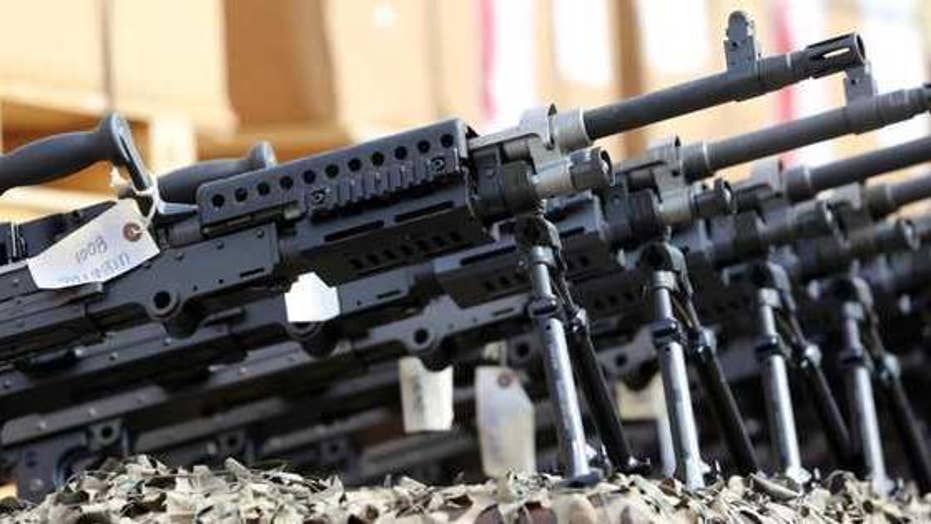 Griff Jenkins reports on New York, Philadelphia and San Francisco pointing the finger at the Department of Defense.

Three major U.S. cities on Tuesday filed a lawsuit against the Defense Department for allegedly failing to report criminal convictions of people in the military to the Federal Bureau of Investigation and its national gun background check database.

The lawsuit – filed by officials in New York, Philadelphia and San Francisco – seeks a court order to force the Pentagon to submit to federal court monitoring of its reporting requirements.

The Pentagon recently acknowledged it has failed to comply with requirements dating back to the 1990s.

“This failure on behalf of the Department of Defense has led to the loss of innocent lives by putting guns in the hands of criminals and those who wish to cause immeasurable harm,” New York Mayor Bill de Blasio said.

The suit argues that having a federal court oversee compliance would reduce the chance of a mass shooting like the recent tragedy in Sutherland Springs, Texas.

In that incident, former airman Devin Kelley shot 26 people to death in a Texas church. Kelley had been convicted in a military court of domestic violence but his case wasn’t reported to the National Instant Criminal Background Check System, which ideally would have prevented him from buying a gun, the complaint claims.

“We cannot accept the level of gun violence in our country as ‘just the way it is’,” San Francisco City Attorney Dennis Herrera said in a statement. “Twenty-six people being murdered at church can never be normal.”

The Pentagon had no comment on the lawsuit though its acting inspector general testified at a Senate committee earlier this month that there was “no excuse” for the military’s repeated failure to comply with reporting rules.

Most recently, military investigators found that nearly one in three court-martialed convictions that should have prevented defendants from purchasing guns had gone unreported.

NICS reporting is required for all federal agencies, including the military, and include regular mandatory compliance reports. The federal law was strengthened following the 2007 mass shooting at Virginia Tech.

The case is City of New York v. U.S. Department of Defense.