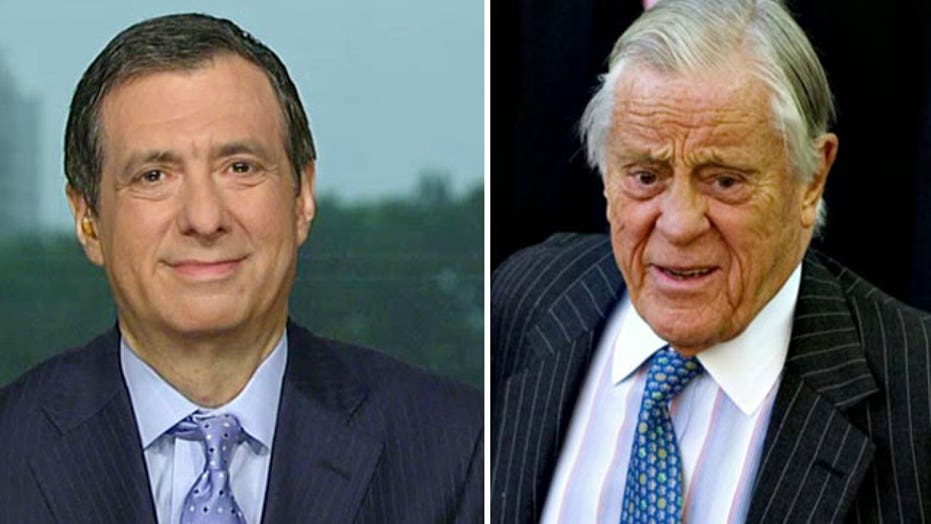 Kurtz: Ben Bradlee was one of a kind in heyday of newspapers

Ben Bradlee will always be remembered as one of the heroes of Watergate, steering his paper with the panache of a Jason Robards, but there was much more to the man.

He was charismatic and yet sometimes bored and detached. He was too close to JFK and yet alienated Jackie by writing a book about their friendship. He turned the Washington Post into a major-league newspaper but also presided over the hugely embarrassing journalistic fraud committed by Janet Cooke.

Bradlee, who died Tuesday at 93, ran the Post for a quarter century, and I not only worked for him, I wrote the story when he stepped down as executive editor in 1991. Until his final years, he continued to come to work every day, often eating in the cafeteria from a cardboard tray with whoever happened to be around.

He was a brave editor but hardly a perfect one. The Harvard grad favored certain pals and  insiders, often of Ivy League pedigree, and engaged in what was called creative tension, pitting rivals against one another.

But together with the publisher, Katharine Graham, Bradlee made his mark by pushing to run the Pentagon Papers in 1971 after a court stopped publication by the New York Times, and by trusting two young metro reporters and a source dubbed Deep Throat.

The Pentagon Papers "was the crucible for the team that emerged to run the paper," Bradlee told me. "It made unnecessary all the tension you might have thought Watergate would bring. . . . There were no great all-night sessions on do you print this or that. Everybody trusted each other."

Bradlee, while at Newsweek, got the Post job by famously telling Graham “I’d give my left one” for the chance.

"Everyone said I wouldn't get along with her. . . . I think she's a fabulous dame,” he told me. "I wouldn't have lasted 20 minutes anywhere else. I'd have blown my cork."

And yet Graham said the two had their disagreements. "I can't edit this section unless you get your [expletive] finger out of my eye," Bradlee once told her.

The difficulties that Woodward and Bernstein had in pursuing Watergate went well beyond unraveling the criminal conspiracy. The Post was under enormous pressure, not just from threats by the Nixon administration, but, with a few exceptions, most of the media failed to pursue the story, leaving Bradlee’s paper on a limb. White House spokesman Ron Ziegler accused The Post of "the shabbiest journalistic techniques."

They all became celebrities after Nixon resigned, glamorized by the film “All the President’s Men,” and a generation of young journalists wanted to be like Robert Redford and Dustin Hoffman. Bradlee and his wife Sally Quinn, a Post writer, became leading lights on the Georgetown party scene.

But behind the glitter, the Post had a number of missteps. Bradlee declared that he’d rather walk bare-assed down Pennsylvania Avenue than apologize to Jimmy Carter, but the paper did apologize for an erroneous gossip item.

Bradlee defended a story about an 8-year-old heroin addict by reporter Janet Cooke, even when D.C. officials insisted no such child existed. She admitted the fabrication after winning the Pulitzer, which had to be returned, and an ombudsman — Bradlee was the first U.S. newspaper editor to appoint one — found a systems failure by Bradlee and his management team.

He got energized by big stories but had little interest in, say, suburban news and incremental science stories. He once brought a toy siren to a story meeting to ridicule pitches he found dull.

Bradlee’s greatest contribution to newspapering was his creation, in 1969, of the Style section, which ranged from scathing profiles and plain old gossip, replacing the old women’s pages about fashion and parties. It was eventually copied by virtually every paper in America.

He was, by today’s standards, way too close to Jack Kennedy, his onetime Georgetown neighbor, who fed him scoops from the White House. Bradlee told me and others he didn’t know of the extramarital activities that would be revealed after JFK’s death, though these were the subject of widespread gossip. And there were bumps in the relationship; Kennedy cut him off occasionally when he wrote something in Newsweek that ticked off the president.

He now seems a throwback in a more corporate era, a constantly cursing Navy vet who walked the newsroom floor, slapping backs, lifting spirits with a few words of praise.

I conducted the last interview with Bradlee for the final issue of Newsweek at the end of 2012, when his Alzheimer’s disease was already fairly advanced. He had trouble remembering certain events from the past, or would lose his train of thought. But his gravelly voice was as strong as ever, his laugh just as hearty, and for a few brief moments, he seemed the Ben of old.