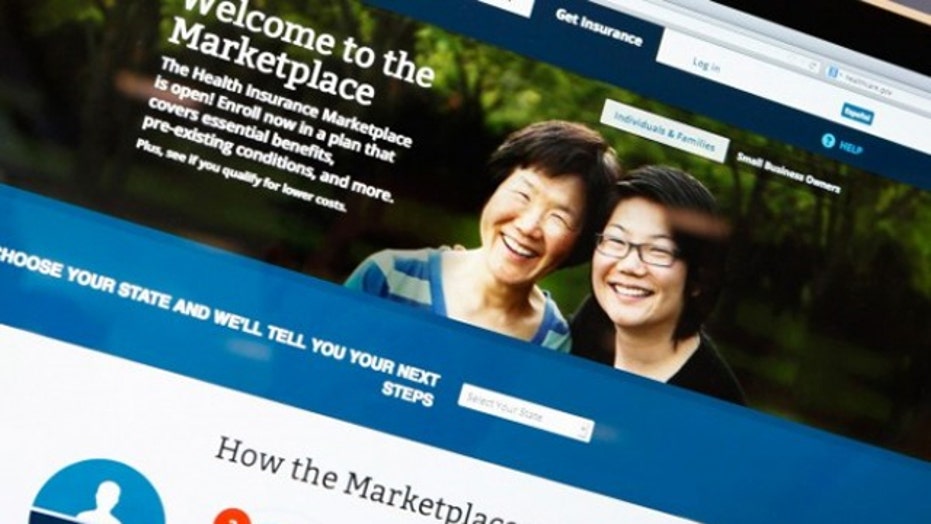 Obamacare by the numbers

On Monday afternoon, a technical glitch was preventing people from filing new applications. A tech team, though, was brought in to resolve the issue.

Earlier Monday, a series of error messages came up as the large volume of users stressed the system.

According to HHS, more than 100,000 people were using the system at once as of noon. The increased traffic is good news for the administration, but the recurring website problems are not.

The deadline to sign up for the president's signature health care law technically is midnight today, though many who have trouble signing in will be given an extension into April.

Amid the return of technical problems, the roiling, years-long debate about enrollment numbers and practically every other aspect of President Obama’s health care law appears far from over in this politically charged election year.

The White House said Thursday that more than 6 million Americans have signed up for private insurance plans since October 1 through the federal and state ObamaCare exchanges -- a major accomplishment toward the White House’s goal of 7 million enrollees by March 31, considering the disastrous start.

On Sunday, ObamaCare supporters were on television championing the law’s recent successes, particularly the late-enrollment surges, including 1.2 million visitors Saturday to the federal site.

But as Plouffe told ABC’s “This Week” the number was really closer to 10 million when including Medicaid and children's health-care signups as well as Americans who went directly to private insurance companies, Republicans continued to question those numbers and why others have not been made public.

“They are cooking the books on this,” Sen. John Barrasso, R-Wyoming, told “Fox News Sunday.”

Beyond questioning the publicly announced numbers, Barrasso and fellow Republicans want to know why the administration has not released such information as whether premium costs will increase when enrollment resumes Nov. 15, and on how many younger Americans have enrolled to cover the health care costs of older enrollees. Other questions include how many enrollees have paid for their insurance premiums; will people be forced out of insurance deemed sub-standard by ObamaCare; will people be allowed to keep their doctors; and how many of enrollees were previously uninsured, considering a major goal of the law was to help them.

Barrasso’s seemingly hard-hitting remarks were in fact nothing new for Republicans, who have opposed the Affordable Care Act since Obama proposed it in 2008 and have since fought to both repeal the law, signed by Obama in 2010, and punish the Democrats who have supported it.

The relentless attacks appear to have taken their toll, despite what Democrats say.

However, the real possibility that Republicans will win six seats in November to take control of the Senate is largely the result of several incumbent Senate Democrats having to defend their support for ObamaCare.

And a Fox News poll released last week showed 56 percent of Americans surveyed oppose the law, compared to 40 percent who support it, numbers consistent with polls by The Associated Press and others.

Beyond the Republicans' repeated predictions that ObamaCare would be a drag on the entire economy, particularly on job-creating small businesses, the law’s first real problems began on October 1, the start of enrollment, when the high volume of prospective customers exposed glitches in the federal and several state websites, resulting in crashes, delays, lost applications, misinformation and a variety of other problems.

Early projections for those five states were to sign up a combined 800,000 Americans for private health insurance coverage by March 31, 11 percent of the Obama administration's original target for national enrollment.

Yet with just one day to go before the six-month enrollment period ends, achieving 25 percent of that target would be considered a success.

Officials in those states have botched their handling of the process so badly that they already are looking beyond Monday's deadline to the next enrollment period starting in November.

Overseers of Nevada Health Link, for example, have called that state's program a "full failure" and a "catastrophe."

Though the overall 6 million-plus number is close to the initial projection by the nonpartisan Congressional Budget Office, Republicans and other ObamaCare critics point out that the president has made dozens of changes to the law through waivers, deadline extensions and other executive actions including some that appear to go beyond the scope of his powers.

The most recent came Wednesday with the White House announcing that Americans who have unsuccessfully tried to enroll by March 31 now have until mid-April.

While Obama has aggressively sought out 18- to 34-year-olds, some of the more recent reports show most of the enrollees are 35 and older.

Yet the bigger question is perhaps whether the law has indeed helped insure at least some of the estimated 48 million Americans who previously did not have insurance or couldn’t get it because of a pre-existing condition.

The most recent finding by the often-cited McKinsey & Company shows 27 percent of enrollees were previously uninsured and that roughly 75 percent of those who signed up for private insurance under ObamaCare have paid their premiums.

Five Senate Democrats, including Mark Warner of Virginia, in a possible attempt to help themselves in difficult races, last week proposed fixes to ObamaCare.

In addition, Angus King, Independent-Maine, acknowledged on “Fox News Sunday” that the administration needs to be more transparent about the numbers and told Barrasso that he would co-sponsor legislation with him “so people can know exactly who is covered and who is not covered by the various policy options.”

Barrasso told Fox News: “What Angus is offering in his legislation only nibbles around the edges. It doesn't get to the fundamental flaws of the president's health care law. The Democrats are unnerved. .. I've looked at this 10 different ways. This health care law is not fixable.”