But O'Donnell stood her ground as she closed out the race by accusing Castle of selling out to the moderate wing of the party. Hailing her win Tuesday as a victory for "citizen politicians," she urged Republicans to "bury the hatchet" and work with her over the next two months to defeat Coons.

"A lot of people have already said that we can't win the general election," O'Donnell said in her victory speech, joining the crowd in a "yes we can" chant. "It is those same so-called experts who said we had no chance of winning the primary.

But all eyes were on Delaware, where Republicans scrambled for the seat formerly held by Vice President Biden.

Considered a long shot just weeks ago, O'Donnell's candidacy got renewed attention after conservative Joe Miller beat Alaska Sen. Lisa Murkowski in their state's Senate primary last month. Big-name endorsements from Sarah Palin and South Carolina Sen. Jim DeMint boosted her profile in the final days of the race, which snowballed into one of the nastiest intra-party battles of the year.

Republican aides told Fox News Tuesday that the National Republican Senatorial Committee will not be funding O'Donnell's general election campaign, leaving it up to Palin and the Tea Party Express to do the heavy lifting.

The NRSC issued a terse statement congratulating O'Donnell for her nomination "after a hard-fought primary campaign."

The Tea Party Express said it hoped the National Republican Senatorial Committee would reconsider its decision not to support O'Donnell.

"We encourage the NRSC to take a night off, get some sleep, and reconsider their rash statements," Tea Party Express spokesman Levi Russell said in a written statement.

"Wake up NRSC," he added. "The reason the Tea Party movement has grown into such a powerful force is because of the failures of establishment organizations such as yours to honor the principles of the Republican Party platform."You tried to force through the most liberal Republican in Congress on the voters of Delaware and they rejected you."

Castle, thanking his campaign staff for their "integrity and honesty," conceded late Tuesday.

"The voters in the Republican primary have spoken and I respect that decision," he said.

Democrats were eager to draw lessons from O'Donnell's victory and immediately portrayed her Tuesday as too extreme for her state, as they did when conservative Sharron Angle won the GOP Senate nomination in Nevada earlier this year.

"Today the Republican Party has shown just how far right it has moved," DNC Chairman Tim Kaine said in a written statement. "While Americans in Delaware and across the country are eager for both parties to work together toward solutions that move America forward, Delaware's Tea Party Republicans have nominated a self-aggrandizing and divisive candidate who seeks to tear down the progress we've made to recover from failed Republican economic policies that took us to the brink of economic collapse."

While O'Donnell's campaign enjoyed a $250,000 injection from the Tea Party Express, some Tea Party groups did not support her. The state GOP and even some of O'Donnell's former staffers have hammered her for calling herself a fiscal conservative when she has had personal financial problems.

O'Donnell tried to brush off the attacks, accusing the party of resorting to "cannibalism" in an ultimately failed attempt to stave off her rise against Castle.

Party leaders no doubt were looking at midterm polls that showed Castle leading Coons in November but O'Donnell trailing. The seat could be critical for Republicans hoping to gain control of the Senate. They need to pick up 10 seats to do so.

Ehrlich won the GOP nomination by a landslide Tuesday and is eyeing a November rematch against Democratic incumbent Martin O'Malley, who beat him in 2006. 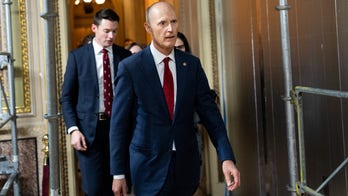