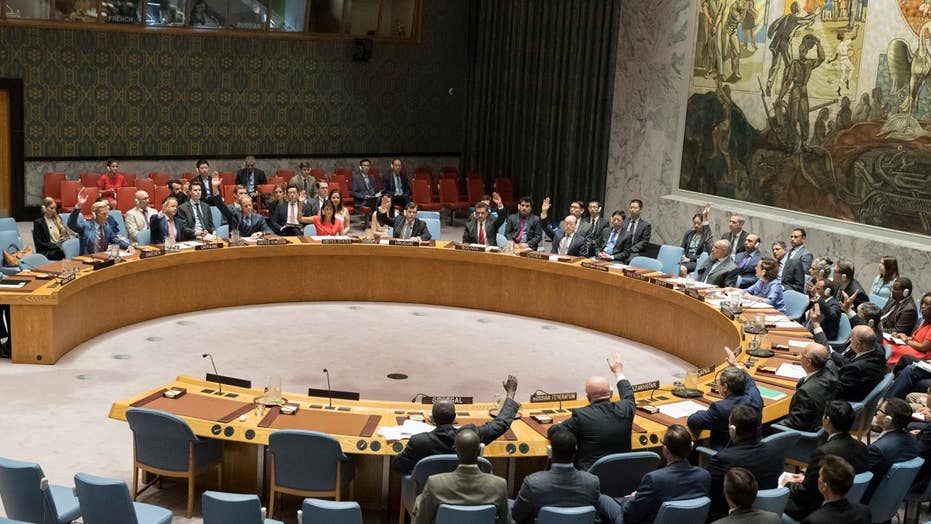 David Lee Miller has the reaction from the U.N.

Tough new United Nations sanctions on North Korea were touted as a diplomatic triumph by the Trump administration, but experts warn that the isolated regime will shrug off the penalties and could even respond with renewed hostility.

Over the weekend, the U.N. Security Council voted unanimously to introduce a set of punishing sanctions that could cost North Korea almost $1 billion off of its $3 billion annual export revenue. The resolution, which is considered the harshest levied against Pyongyang in a decade, was payback for its testing of two intercontinental ballistic missiles last month. Those tests, plus word that the rogue regime may have miniaturized nuclear weapons, has brought the world to the brink of war.

Any hope the sanctions would cool down boiling tensions was quickly dashed. North Korea immediately threatened to send “packs of wolves” to “attack and strangle a nation.”

“They should be mindful that [North Korea’s] strategic steps accompanied by physical action will be taken mercilessly with the mobilization of all its national strength,” the country’s KCNA news agency said in a statement.

On Tuesday, President Trump warned that Kim Jong Un “will be met with fire, fury and frankly power, the likes of which the world has never seen before.”

Trump also said that Kim Jong Un “has been very threatening beyond a normal state” and said the regime “best not make any more threats to the United States.”

Experts told Fox News the latest sanctions are not likely to put the necessary pressure on North Korea.

“For North Korea, this is a matter of national survival—Kim Jong Un has staked his legitimacy on having a nuclear capability,” Scott Snyder, author and senior fellow for Korea studies at Center on Foreign Relations, told Fox News. “North Korea has said clearly that the only thing they would consider as a starting offer for talking about nuclear, would be the U.S. removing its hostile policy.”

Snyder added: “I just don’t think, at this point, sanctions are going to lead to a negotiation process, and in the immediate near term, I think it’s likely they’ll respond with further provocations.”

Gordon Chang, who authored "Nuclear Showdown: North Korea Takes on the World and The Coming Collapse of China," told Fox News that the United States also should not be confident in the level of China’s commitment to the sanctions package.

“China would not have voted for these sanctions if they thought they were going to be effective,” Chang told Fox News. “The best thing the Trump administration can do is call out the Chinese for transferring ballistic missile equipment to North Korea, and sanction Chinese banks—the big ones that are involved in money laundering.”

Chang pointed to China’s behavior with coal sanctions in November 2016, when the Chinese agreed to stop buying coal from North Korea. China banned all imports of North Korean coal on February 26, cutting off the country’s most important export product, after repeated North Korean missile tests. In April China reportedly turned away North Korean coal ships and returned them to their home port of Nampo –a move President Trump celebrated as a “big step.”

But Chang said that the Chinese did, in fact, buy coal from North Korea, and have continued to do so through third parties.

“They do this because administrations in the past have let them—this is not a story about North Korea or China—this is a story about the failure of American policy makers to protect the American people,” Chang said. “We are the most powerful nation in history and are constantly outwitted by one that is the most destitute on the earth.”

“These sanctions, on paper, would quarantine the North Korean economy from the international community, but it’s possible that what may happen, is North Korean trade with China is simply moved off the books,” Snyder told Fox News. “It’s really implementation and enforcement that remains the critical sticking point.”

TRUMP: BID TO GET CHINA'S HELP ON NORTH KOREA 'HAS NOT WORKED OUT'

Chang suggested the president’s harsh rhetoric on Tuesday and his early morning tweets about the U.S.’s nuclear arsenal, were directed to China, rather than North Korea.

“I think he is trying to intimidate the Chinese into cooperating with the international community,” Chang told Fox News. “My sense is this is signaling to Beijing more than anything.”

TRUMP SAYS US NUCLEAR ARSENAL IS 'STRONGER, MORE POWERFUL THAN EVER BEFORE' AMID NORTH KOREA THREAT

Both Snyder and Chang told Fox News that while it’s too early to tout sanctions, the Trump administration is facing a greater sense of urgency in regard to North Korea, and blamed past administrations for the status of the threat posed by Kim Jong Un.

Chang also shifted blame to the Obama administration, and presidents dating back to Bill Clinton and said there has been “bipartisan failure” with regard to North Korea.

“Obama let the North Koreans slide for eight years, but told the Trump transition team that North Korea would be their number one national security priority," Chang said. "That was making an admission.”