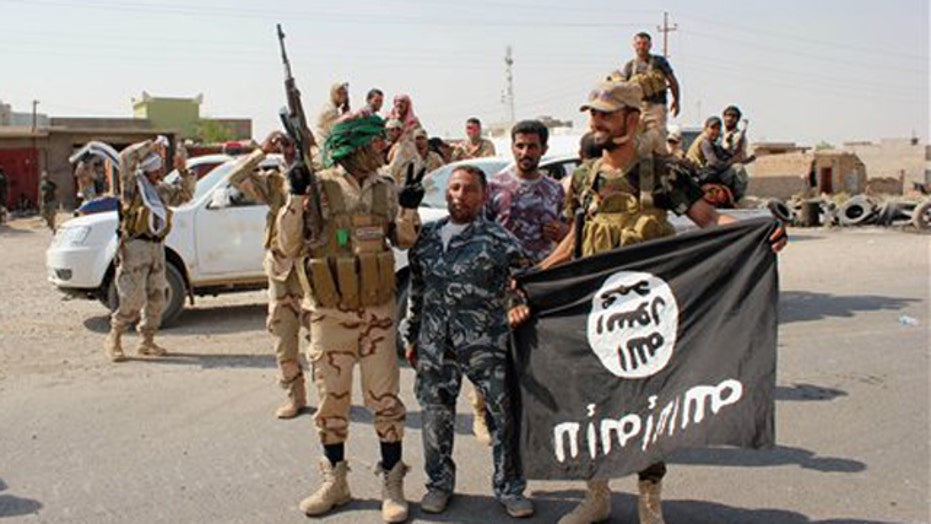 The State Department is launching a tough and graphic propaganda counteroffensive against the Islamic State, using some of the group's own images of barbaric acts against fellow Muslims to undercut its message.

While the department since 2011 has operated a small unit devoted solely to the task of analyzing and countering terrorists’ messaging around the world, that unit – the 50-member Center for Strategic Counterterrorism Communications -- has shifted gears in recent months to concentrate more on the Islamic State threat.

The social media presence – on YouTube, Twitter, Facebook and beyond – has started using some potentially risky tactics to go after the militant network, also known as ISIS.

The item grabbing the most attention lately is a shock factor-heavy YouTube video set up as a fake recruiting ad for the Islamic State.

“Run – do not walk to ISIS Land,” the video implores viewers. The video tells recruits they can learn “useful new skills” -- like “blowing up mosques” and “crucifying and executing Muslims.” (WARNING: GRAPHIC VIDEO)

Illustrating the sarcastic appeal is an array of bloody images and videos, including of people being crucified, decapitated heads arranged next to each other, and mosques being blown up.

The “ad” ends with the line: “Travel is inexpensive, because you won’t need a return ticket!”

Not everyone thinks the “ad” is an effective tool.

“I just thought it was bizarre,” Sen. Ted Cruz, R-Texas, told Fox News, dismissing the video as a symptom of “press release foreign policy” that is “fundamentally unserious.”

But a State Department spokesperson said the work is vital “given how violent extremists are increasingly exploiting the suffering caused by global conflicts to lure susceptible youth” to join.

“We believe countering our adversaries in this space is critical. We must contest the space by confronting distortion with reality and lies with truth,” the spokesperson told FoxNews.com.

The video is part of the State Department’s “Think again. Turn away” campaign aimed at convincing would-be recruits not to join.

The effort comes as the Obama administration comes under fire from critics who say it waited too long to act against the Islamic State, despite clear evidence the group was gaining a startling amount of territory – and military equipment -- in northern Iraq and Syria earlier this year.

“His policy so far has been a policy of containment, not of defeat,” House Homeland Security Committee Chairman Michael McCaul, R-Texas, told “Fox News Sunday.”

But some see the president toughening his tone in recent days. Obama plans to outline his plans to House and Senate leaders on Tuesday, before publicly explaining his anti-Islamic State strategy during a speech on Wednesday.

So far, that strategy has been contained to airstrikes in northern Iraq, assistance for Kurdish and Iraqi security forces and humanitarian aid. Pentagon Spokesman Col. Steve Warren said Monday that 1,192 U.S. troops are in Iraq.

The administration has been criticized before for relying too much on social media to pursue its diplomatic aims.

But in this case, ISIS is considered to run a formidable messaging operation, and the department says it’s trying to offer “alternate perspectives to the misguided ideological justifications for using violence.”

The tough messages coming out of the State Department are a far cry from the ads the department put out after the 2012 Benghazi attack condemning an anti-Islam film that some officials had blamed for the violence. Critics saw the ads as tantamount to an apology from the United States.

The Center for Strategic Counterterrorism Communications, which is running the latest campaign, launched in 2011 to “coordinate, orient, and inform government-wide foreign communications activities targeted against terrorism and violent extremism,” according to the State Department. It runs on an annual $6 million budget, and works to challenge “extremist propaganda in previously uncontested digital space.”

According to a State Department spokesperson, the unit launched a “small pilot English Language Initiative” in late 2013 to counter extremists trying to recruit in the “English-speaking world.” The English-language YouTube channel was launched this past June, producing videos in-house.

The team now puts out its messages in Arabic, Urdu, Punjabi, and Somali, as well as English.

On its “Think again. Turn away” Twitter account, the feed pumps out a slew of news stories highlighting negative headlines about ISIS and other terror groups, including Somalia’s al-Shabaab.

The department is in an uphill battle to compete against the Islamic State’s online reach.

But according an analysis by intelligence firm Recorded Future, despite efforts by Twitter to shut down affiliated accounts, as of early September there were still over 27,000 “pro-ISIS accounts” tweeting since American journalist James Foley was beheaded by ISIS militants.

Recorded Future, in collaboration with Sky News, found supporters are creating new accounts almost as soon as their old ones are suspended.