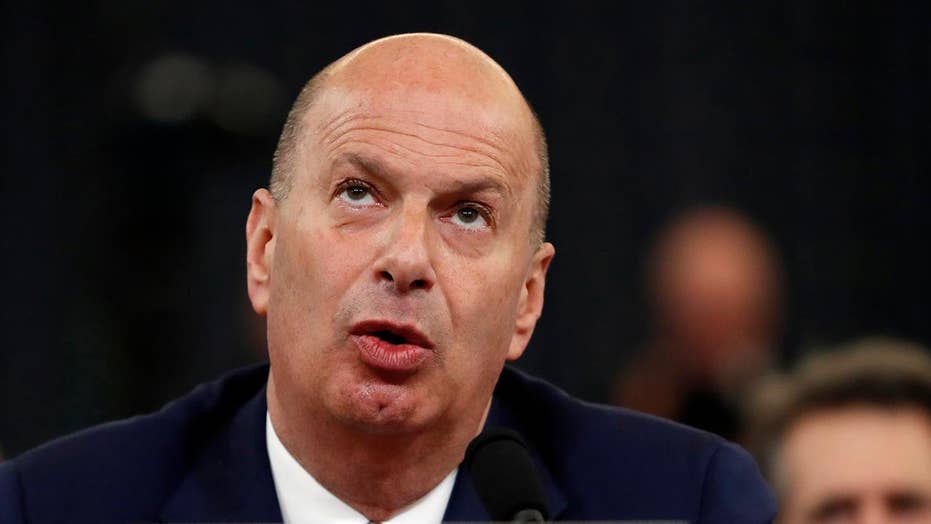 The otherwise serious impeachment hearing featuring testimony from U.S. Ambassador to the EU Gordon Sondland enjoyed a bit of comic relief Wednesday morning, as House Intelligence Committee majority counsel Daniel Goldman had Sondland recall a salty phone call he had with President Trump while he was in Ukraine.

While discussing the details of the call, which was previously described by another official, Sondland spoke to the casual nature of his communications with the president. The moment in question concerned his assurance to Trump that Ukrainian President Volodymyr Zelensky "loves" him.

"[Holmes] also testified that you confirmed to President Trump that you were in Ukraine at the time and that President Zelensky, quote, 'loves your ass,' unquote," Goldman stated. "Do you recall saying that?"

"Yeah, sounds like something I would say," Sondland responded, drawing laughs from those in attendance. "That's how President Trump and I communicate. A lot of four-letter words. In this case, three-letter."

Sondland later explained that this was his way of letting Trump know that Zelensky was very amicable in a meeting Sondland had recently had with the Ukrainian leader.

"He was just very willing to work with the United States, and was being very amicable, and so putting it in Trump-speak by saying he loves your ass, he'll do whatever you want, and that he would really work with us on a whole host of issues."

Others have said that the two of them specifically discussed investigations on that call, apparently referring to Trump's desire for politically advantageous probes from Kiev.

Sondland's testimony began the fourth day of public hearings in the House Intelligence Committee's impeachment inquiry of Trump, which thus far has centered on whether or not Trump tried to pressure Ukraine into investigating Democratic activities in 2016 as well as former vice president Joe Biden and his son Hunter, who was on the board of the Ukrainian energy company Burisma while the elder Biden was in office.

Sondland testified that it was his impression that Trump would not meet with Zelensky at the White House unless Zelensky publicly declared that he was conducting investigations of the Democrats and Burisma. Democrats have accused Trump of also withholding military aid to Ukraine as leverage to get the investigations. Sondland said he never directly heard from Trump that this was the case, although he did say he never got a clear answer as to why the aid was held back and presumed they were linked.

Sondland did recall that at one point he asked Trump what he wants from Ukraine.

Republicans have defended Trump by noting that the aid was eventually released without any announcement or investigations on Zelensky's end.