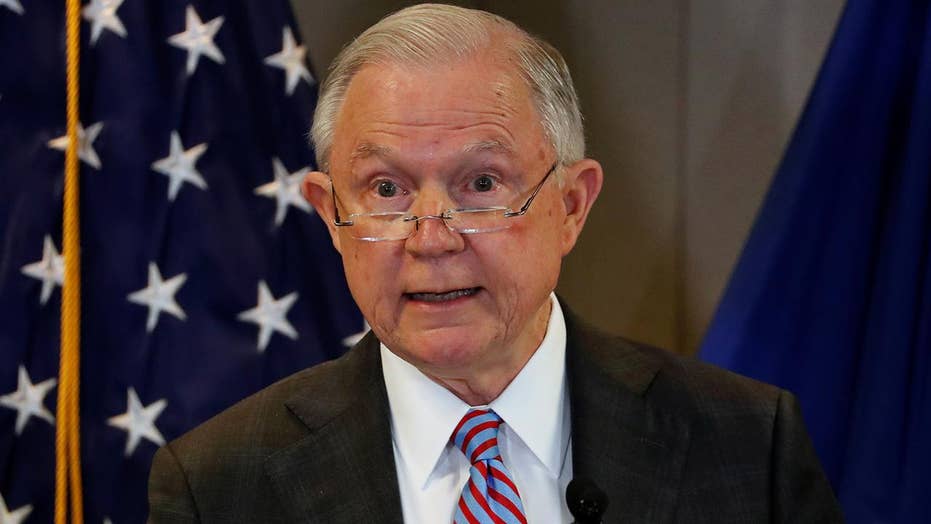 Jeff Sessions: Our 'generous' asylum system is being abused

Attorney General Jeff Sessions declared a “crisis” Thursday over the surge in asylum claims being made by border crossers, blaming the Obama administration and saying the system is “being gamed.”

Sessions, speaking at the Justice Department's Executive Office for Immigration Review, took aim at policies that allow people to effectively get asylum if they claim to have a "credible fear" of returning home.

Sessions said the Obama administration expanded this by allowing many who passed an initial review to be released from custody into the U.S. pending a hearing. He said the claims, many of them false, are now skyrocketing.

“The system is being gamed. There is no doubt about it. The credible fear process was intended to be a lifeline for persons facing serious persecution,” Sessions said. “But it has become an easy ticket to illegal entry into the United States.”

'The system is being gamed. There is no doubt about it.'

Sessions said the increase in claims has been “especially pronounced and abused” at the border. From 2009 to 2016, the credible fear claims at the border rose from approximately 3,000 cases to more than 69,000.

Sessions said, in total, the Executive Office for Immigration Review has more than 600,000 cases pending—triple the number since 2009.

“The previous Administration began to allow most aliens who passed an initial credible fear review to be released from custody into the United States pending a full hearing,” Sessions said.  “These changes—and case law that has expanded the concept of asylum well beyond Congressional intent—created even more incentives for illegal aliens to come here and claim a fear of return.”

Many of the previous requests were approved. Sessions noted that in their review, DHS found "credible fear" in 88 percent of cases.

“This is a compassionate country – and lawfully admits more immigrants than any country in the world,” Sessions said. “But we must recognize that our generous system is being terribly abused.”

Under U.S. policy, immigrants who have an “actual, legitimate fear” of returning to their home countries are able to seek asylum in the United States. The longstanding policy is meant to “protect those” who cannot live in their homelands due to fear of “persecution” based on religion or nationality.

The Department of Homeland Security does not yet have new statistics from the early months of the Trump administration.

Sessions called on Congress to pass immigration reforms, including to the asylum system, that President Trump pushed for earlier this week.

“President Trump understands this is a crisis. And so do the American people,” Sessions said.