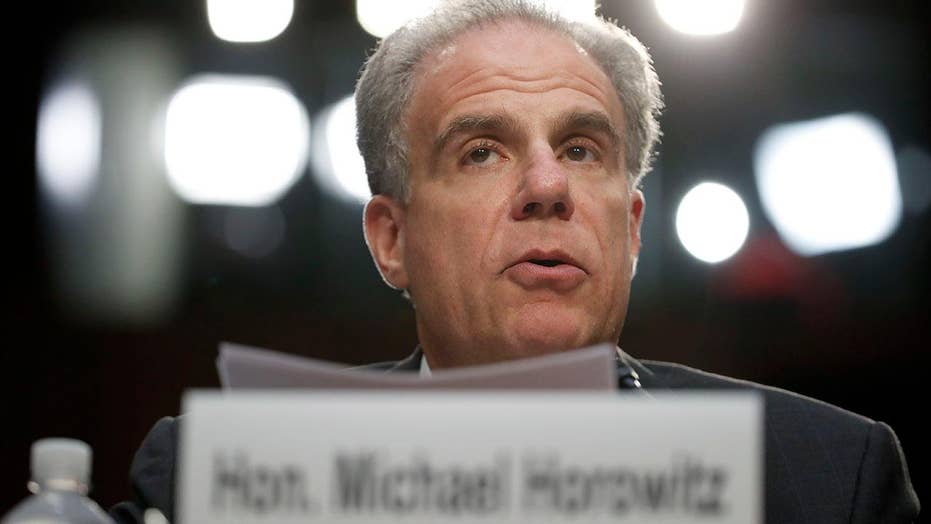 During the hearing, Horowitz revealed that the DOJ watchdog is already investigating Comey concerning his leaked memos documenting his interactions with President Trump, which critics charged may have contained classified information. 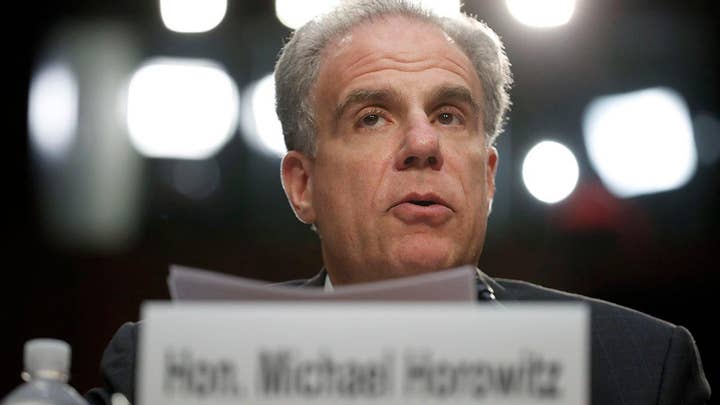 "We've received a referral on that from the FBI ... and we will issue a report when the matter is complete," Horowitz said.

Under questioning from Sen. Ted Cruz, R-TX, Wray pointedly refused to discuss specifics over whether Comey had lied in his previous testimony before the Senate Judiciary Committee, citing "pending" investigative matters at the FBI.

LANNY DAVIS: COMEY LIED, AND 'HE KNOWS IT'

Wray also declined to discuss whether Comey or McCabe had illegally authorized leaks to the media, saying that could compromise ongoing investigations.

Horowitz's report on the Clinton email probe, which went public Thursday, outlined apparent anti-Trump bias at various levels in both the FBI and DOJ. It also concluded that Comey had used a personal email account to "conduct unclassified FBI business," in a manner inconsistent with FBI policy.

Grassley, R-Iowa, excoriated Comey for not attending the hearing in his opening remarks, and called for a closer look at his email practices.

“This is the second time since he was fired that Mr. Comey an refused an invitation to testify here voluntarily,” Grassley said. “He has time for book tours and television interviews but apparently no time to assist this committee, which has primary jurisdiction over the Justice Department."

In a letter to Wray, Grassley on Monday drew parallels between Hillary Clinton's email practices and Comey's.

"It is disturbing that FBI employees tasked with investigating Secretary Clinton, including the former Director, appear to have engaged in strikingly similar conduct," he wrote.

Grassley argued that it's impossible for Congress to be sure Comey was not discussing classified information on his personal Gmail account, as the IG report concluded, without actually seeing and reviewing all of his emails.

During questioning Monday, Horowitz acknowledged that he couldn't be sure "what other purposes [Comey] may have used [the email account] for," beyond what he saw in emails that reached FBI servers, Horowitz told Grassley.

"Let's not pretend this is some one-off problem."

Meanwhile, Sen. Orrin Hatch, R-Utah, took aim at Wray during the hearing, saying he was "disappointed" by the FBI director's attempt at a news conference last week to downplay the possibility of systemic, pervasive bias throughout the FBI.

"They were insubordinate, grossly unprofessional in their communications, and even untruthful -- so let's not pretend this is some one-off problem," Hatch charged.

Wray repeatedly said mistakes made by employees and cited in the IG report "do not define" the agency as a whole.

"We are aggressively investigating a number of leaks as we speak," Wray said later in the hearing.

GOP senators spent most of the hearing grilling Wray over the FBI's conduct, while Democratic members of the committee sought to defend the integrity of the ongoing Russia probe.

In response to the findings in the IG report that there was no definitive evidence the FBI's handling of the Clinton email probe was politically motivated, Grassley said that text messages between FBI employees Peter Strzok and Lisa Page criticizing Trump "prove that's false."

Both officials worked on the Clinton probe and later the department's Russia investigation. In one text, Strzok wrote, "We'll stop it," referring to a Trump victory.

In the hearing, Horowitz testified that his office unearthed those explosive texts -- not the FBI.

The DOJ watchdog added that he "did not have confidence" that all of Strzok's investigative decisions as the lead agent on the Clinton email probe were free from bias.