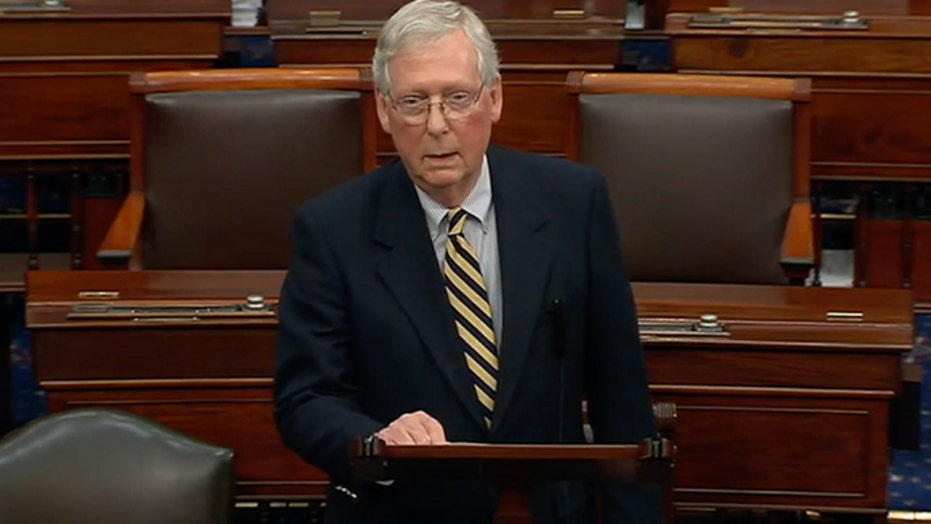 The GOP-controlled Senate on Sunday failed to move forward with considering the $1.4 trillion "Phase Three" stimulus package intended to help businesses and families devastated by the downturn over the coronavirus outbreak, as Senate Majority Leader McConnell, R-Ky., blasted Democrats opposed to the plan.

The vote came while at least five GOP senators were in self-quarantine, including Sen. Rand Paul, R-Ky., who became the first U.S. senator to announce he tested positive for the virus. Senators were asked to practice social distancing and were given a list of health guidelines to follow while entering the chamber. 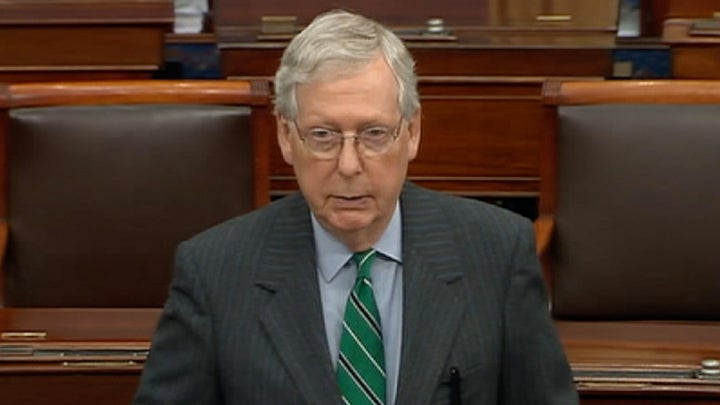 Democrats also pushed for add-ons including food security aid, small business loans and other measures for workers — saying the three months of unemployment insurance offered under the draft plan was insufficient.

Senate Minority Leader Chuck Schumer, D-N.Y., said the draft package "significantly cut back our hospitals, our cities, our states, our medical workers and so many others needed in this crisis."

House Speaker Nancy Pelosi, D-Calif., urged colleagues to "take responsibility" as Democrats prepared their own draft. The House had just returned from a weeklong recess.

After the bill failed to move forward, McConnell tore into Democrats, accusing them of backing out of a bipartisan agreement once Pelosi and Schumer intervened. He claimed Pelosi took "a week off" and "poured cold water on the whole process." He also said the Senate would re-vote on the motion to proceed with consideration of the bill Monday morning, "15 minutes after the markets open to see if there's a change of heart." 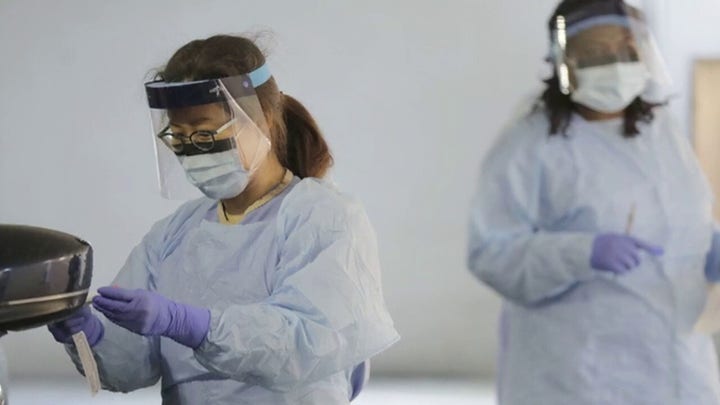 "The build-up to this is that we had a high level of bipartisanship over the last 48 hours... And then, all of a sudden, the Democratic leader and the speaker of the House shows up...and we're back to square one," he said, referring to Schumer and Pelosi. "I want everybody to understand that if we aren't able to act tomorrow, it's because of our colleagues on the other side, continue to dicker."

McConnell said the Senate will hold a cloture vote again at a time of his choosing, adding, "hopefully some adults will show up on the other side of the room and understand the gravity of the situation before the markets go down further...we've never been confronted by anything like this before."

"We voted no on the McConnell-GOP bill because among other problems it includes huge bailouts without protections for people and workers and without accountability, and because it shortchanges our hospitals and healthcare workers who need our help," Schumer tweeted. "These changes need to be made."

Schumer and Treasury Secretary Steven Mnuchin were "working late into the night, and they just had another productive meeting," a Schumer spokesman said late Sunday. Schumer and Mnuchin met at least four separate times during the day.

The urgency to act has been mounting, as jobless claims have risen, many businesses shuttered and the financial markets are set to re-open Monday eager for signs that Washington could soften the blow of the health-care crisis and what experts have warned could be a looming recession.

At issue: how best to keep paychecks flowing for millions of workers abruptly sidelined by the crisis, shore up businesses and aid hospitals.

While congressional leaders worked to send help, alarms were being sounded from coast to coast about the wave of coronavirus cases about to crash onto the nation's health system.

Meanwhile, a growing list of lawmakers have cycled in and out of isolation after exposure, and two members of the House have said they tested positive.

There also was a $242 billion proposal for emergency supplemental food, hospital and public health needs, including for the Centers for Disease Control and Prevention [CDC].

For most people, the new coronavirus has sparked only mild or moderate symptoms, such as fever and cough. For some, especially older adults and people with existing health problems, it could cause more severe illness, including pneumonia.