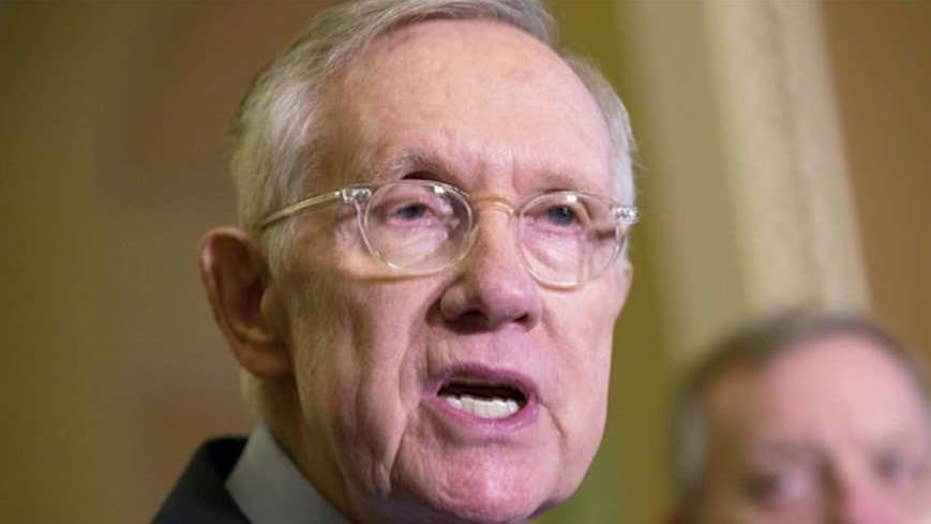 Schumer, who until Wednesday was the third-ranking Senate Democrat, secured the top position with little opposition after Reid, D-Nevada, announced his retirement this summer.

And he managed to hold onto the post, despite Democrats boasting for years about retaking control of the Senate in 2016, only to gain two seats and fall short of winning a majority.

“I am humbled and honored by the trust and confidence my colleagues have placed in me,” Schumer said after the balloting. “I am going to wake up every single day focused on how Senate Democrats can effectively fight for America’s middle class and those struggling to make it.”

The palace intrigue about Capitol Hill leadership posts now focuses on whether California Rep. Nancy Pelosi will remain as the top House Democrat, a position she’s had since 2002.

House Democrats on Tuesday delayed leadership votes scheduled for Thursday, saying they needed to time to sort out their legislative agenda after a similarly lackluster performance on Election Day.

However, they privately acknowledged a need to rethink Pelosi’s leadership, considering she vowed that Democrats would retake control of the House, lost in the 2010 wave election.

Pelosi on Wednesday formally announced her bid. And in an apparent effort to try to solidify her standing as Ohio Rep. Tim Ryan and other rank-and-file Democrats consider a challenge, Pelosi said she was “pleased to report the support of more than two-thirds of the caucus.”

The House Democratic leadership vote is now scheduled for Nov. 30.

On Tuesday, House Republicans re-nominated Rep. Paul Ryan for House speaker, despite some earlier rumblings from the chamber’s most conservative caucus about ousting Ryan after he further distanced himself from Donald Trump in the closing weeks of the fellow Republican’s successful White House bid.

The final vote for House speaker will be on Jan. 3, with members of both parties voting on the House floor.

Schumer, 65, has a history of being a savvy partisan combatant willing to strike compromises, such as on a 2013 bipartisan immigration overhaul that ended up dying.

He vaulted past No. 2 Senate Democratic leader Dick Durbin of Illinois and will lead Democrats' last line of defense against the Trump White House and GOP-controlled House.

Durbin was reelected to his post, minority whip. And Washington Sen. Patty Murray was elected as assistant Democratic leader, which now makes her the chamber’s third-highest-ranking Democrat. (The position when held by Schumer was titled vice chairman of the Democratic Conference.)

Senate Democrats -- outnumbered 52-48, including two independents who back Democrats -- could prevent McConnell from getting the 60 votes he'll need on some important issues.

Schumer has said he'll seek opportunities to work with Republican President-elect Donald Trump but will face pressure from disappointed Democratic activists to adopt a hard line.

Like Schumer, Sanders and Warren are progressives. Sanders votes with Democrats and ran in the 2016 White House race as a Democrat.

It's unclear how Schumer will balance the demands of Warren and Sanders against red-state senators facing re-election in 2018 and needing protection from politically damaging votes.

McConnell, 74, was Senate minority leader for eight years before the GOP took control of the chamber for 2015 and 2016.

He's pushed a conservative agenda while cutting budget deals with the Obama administration, and boldly refused to let the Senate consider Obama's nomination of federal judge Merrick Garland to fill a Supreme Court vacancy that occurred last February. That move paid dividends when Trump was elected.

McConnell opened the Senate's first session of the lame-duck Congress calling for unity.

"We're not Democrats first. We're not Republicans first. We are Americans first," said McConnell, who early in Barack Obama's presidency said his goal was to limit him to one term.

The only change is the addition of Colorado Sen. Cory Gardner as National Republican Senatorial Committee chairman.

“It’s an honor to once again have been chosen by my colleagues to continue serving as their leader,” McConnell said. “We are eager to work with House Republicans and President-elect Trump to bring the national and economic security our nation is asking for.”

Ryan will need 218 votes -- a majority -- to be approved when the full, new House convenes in January. With the GOP on target to have 241 seats next year, Ryan can afford just 23 defectors, but many Republicans expect Ryan to be safe in the GOP afterglow of Trump's win.

Aiding Ryan is support from Trump and Vice President-elect Mike Pence, which Ryan and others underscored to Republican lawmakers before they voted.