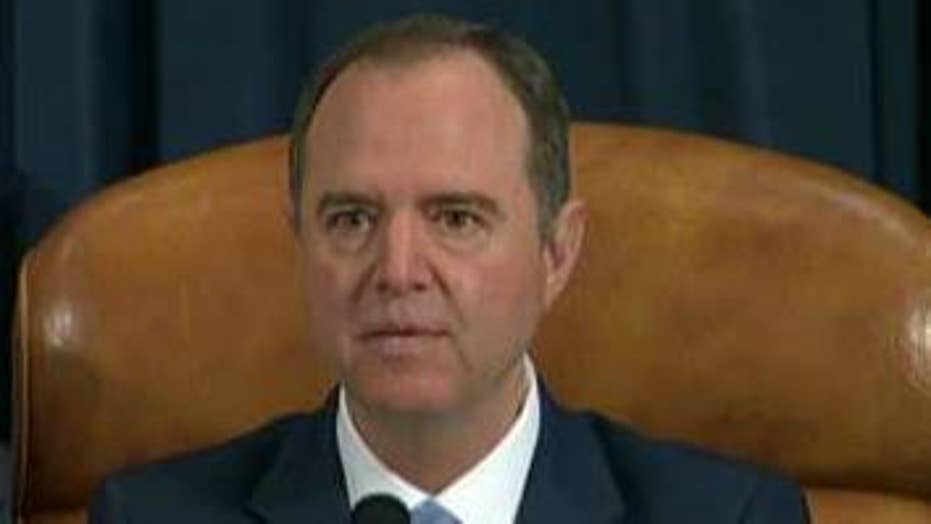 House Intelligence Committee Chairman Adam Schiff, D-Calif., announced Monday that Democrats "are now preparing a report" for the House Judiciary Committee, signaling that his panel is wrapping up its work and that the next phase of the impeachment inquiry against President Trump is imminent.

Calling the evidence against the president "overwhelming, unchallenged and damning," Schiff nevertheless asserted that investigative work would continue, and left open the possibility that Democrats would hold additional hearings.  But all scheduled public hearings before Schiff's panel wrapped up on a testy note last week, and no new proceedings are planned.

"As required under House Resolution 660, the Committees are now preparing a report summarizing the evidence we have found this far, which will be transmitted to the Judiciary Committee soon after Congress returns from the Thanksgiving recess," Schiff wrote in a letter to congressional colleagues.

He noted that the report "will catalog the instances of non-compliance with lawful subpoenas as part of our report to the Judiciary Committee, which will allow that committee to consider whether an article of impeachment based on obstruction of Congress is warranted along with an article or articles based on this underlying conduct or other presidential misconduct. Such obstruction was the basis of the third article of impeachment against President Richard Nixon."

In a worrying omen for moderate Democrats in swing districts that could have factored into Schiff's decision, polls have shown that independents are souring on the impeachment process. Fifty percent of independents questioned in an NPR/PBS/Marist poll conducted Nov. 11-15 did not support impeaching and removing Trump from office, with just 42 percent backing such a move. That’s a slight dip in support compared with the previous NPR/PBS/Marist poll – conducted the first week in October – when support stood at 45 percent.

Once it receives Schiff's report, the House Judiciary Committee has the option of drafting articles of impeachment outright or holding further hearings. Under a resolution passed by House Democrats on the Rules Committee this past October, Trump and the White House potentially would have more rights to defend themselves in any potential Judiciary Committee hearings. For example, attorneys for the president could participate in such proceedings.

But, in a bid for leverage, Chairman Jerrold Nadler, D-N.Y., would be allowed under the rules to deny "specific requests" by Trump representatives if the White House continued refusing to provide documents or witnesses sought by Democratic investigators.

A possible timetable for impeachment has been unclear. It’s generally thought the Judiciary Committee may hold a "markup" in which it writes articles of impeachment in mid-December. If that were to happen, it's possible the full House could vote on articles of impeachment sometime close to Christmas. That would be a similar timeframe to the impeachment of former President Bill Clinton: The House impeached Clinton just before Christmas in 1998. The Senate trial then began in January 1999.

Fox News reported last week that Democrats were considering four articles of impeachment against the president: Abuse of power, bribery, contempt of Congress, and obstruction of justice.

At a meeting with top GOP senators and Trump administration officials at the White House last Thursday, Fox News is told there was a consensus that should Trump be impeached by the House, the GOP-controlled Senate should hold a full trial, rather than ignore the issue.

Trump has argued that U.S. Ambassador to the European Union Gordon Sondland's testimony before the Intelligence Committee was a total exoneration. "I just noticed one thing and that would mean it’s all over," Trump said on the White House lawn before reading from handwritten notes taken during Sondland’s testimony. Sondland testified about a conversation with Trump during which he asked the president what he wanted from Ukraine.

KEY WITNESSES UNDERCUT CLAIMS OF 'QUID PRO QUO' .... DIPLOMAT THEN CLAIMS 'QUID PRO QUO,' BUT ADMITS IT'S BASED ENTIRELY ON HIS PRESUMPTIONS

Reports have surfaced that Republicans were considering even holding a long trial to disrupt the 2020 presidential primaries. Several Democrats seeking to unseat Trump -- including Kamala Harris, Amy Klobuchar, Elizabeth Warren and Bernie Sanders -- are senators who would need to divert at least some of their campaigning time toward a potential trial.

Should the House approve impeachment articles and trigger a trial in the Republican-controlled Senate, Trump’s allies are already indicating they will look more closely at allegations involving Democrats -- including Trump's allegations of corruption against Joe and Hunter Biden involving their Ukraine dealings.

Additionally, Republicans would likely focus on Ukrainian meddling in the 2016 election, and defend the president's push for investigations in that area before releasing any foreign aid. Numerous media outlets, and a Ukrainian court, have confirmed that Ukrainian actors meddled in the election, despite claims by Democrats and many media personalities that the allegations amount to a "conspiracy theory." 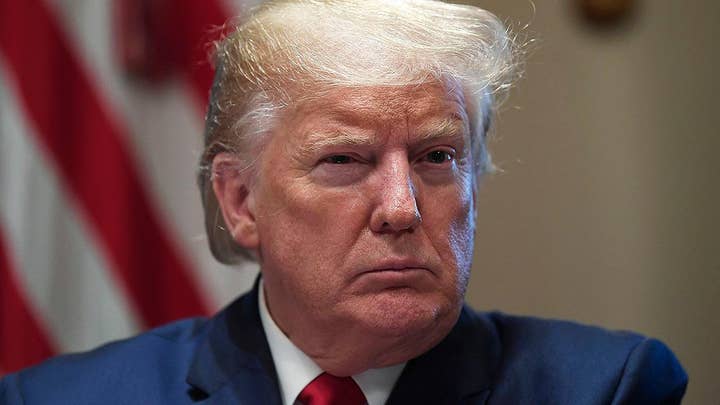 However, the House theoretically could pass articles of impeachment, but delay a vote to send them to the Senate for consideration -- perhaps to delay handing Senate Majority Leader Mitch McConnell, R-Ky., control over the proceedings.

"I think most everybody agreed there's not 51 votes to dismiss it before the managers get to call their case," Senate Judiciary Committee Chairman Lindsey Graham, R-S.C., told Fox News after huddling with other top Republican senators and White House officials. "The idea you would dismiss the trial before they presented the cases is a non-starter. You're not going to get a motion to dismiss."

But, Graham indicated that any Senate trial wouldn't be pleasant for at least one Democratic presidential frontrunner. On Thursday, Graham penned a letter to Secretary of State Mike Pompeo requesting the release of any documents related to contacts between Biden former Ukrainian President Petro Poroshenko, and to a meeting between son Hunter Biden’s business partner and former Secretary of State John Kerry.

The letter pertained to Biden's successful push to have Ukraine's top prosecutor fired by threatening to withhold $1 billion in U.S. aid when he was vice president and in charge of Ukraine policy. The prosecutor was probing Burisma holdings, where Hunter Biden held a highly lucrative role on the board despite having little relevant experience.

Already, some witnesses in the impeachment probe have raised concerns about the Biden's dealings in Ukraine.

Deputy Assistant Secretary of State George Kent, for example, testified behind closed doors last month that he had qualms about the younger Biden's role on the board of Burisma. And former U.S. Ambassador to Ukraine Marie Yovanovitch said she was "aware" of a potential issue, because Obama administration officials prepped her for questions about Hunter Biden during her confirmation process.

"I was aware of it because as I told you before in the deposition, there had been a -- in terms of the preparation for my Senate confirmation hearings for Ukraine, there was a question about that and a select answer, so I was aware of it," Yovanovitch said.

She added that she was told that if the matter came up, she should refer questions to other departments.