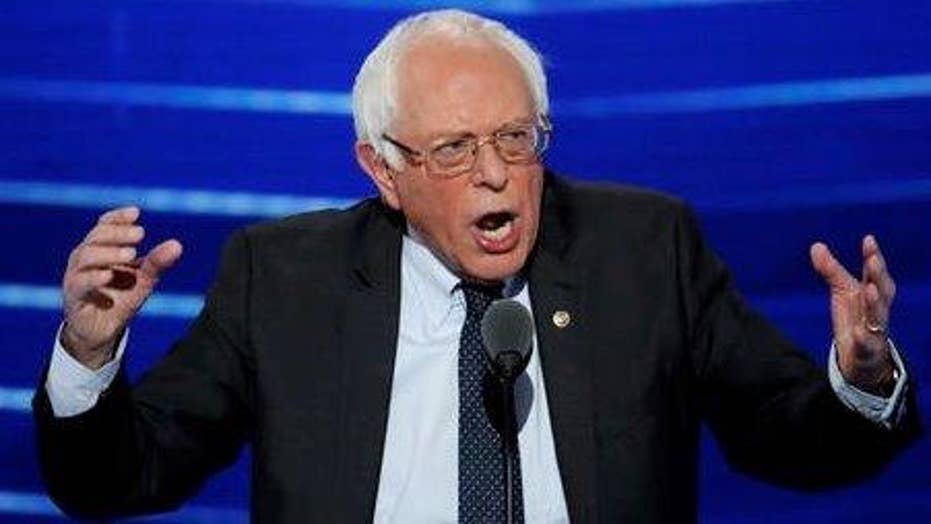 Sanders: Hillary Clinton must become the next president

PHILADELPHIA – Democrats tried to turn their attention Monday night from an email scandal that claimed their party chairwoman and sent Bernie Sanders supporters into near rebellion with a scorching attack on Donald Trump that ranged from unnamed references by Michelle Obama to in-your-face attacks by Elizabeth Warren and Sanders himself.

The Vermont senator blasted Trump as a candidate who "insults" minorities and "divides us up."

“Based on her ideas and her leadership, Hillary Clinton must become the next president of the United States,” the Vermont senator told the rowdy and emotional convention crowd, with many of his supporters visibly crying during his remarks and chanting his name.

Sanders appealed to supporters Monday night to get behind Clinton, as he tried to restore order at the Democratic convention after a chaotic opening day marked by intense street protests and near-constant disruptions inside the arena from delegates and others loyal to him.

Sanders suddenly found himself in the role of helping the Democratic Party whose establishment had shunned him for much of the primary race. But he now is virtually their only hope for easing the tensions at the Philadelphia convention, where delegates are poised to crown Clinton as the party’s presidential nominee on Tuesday.

“I understand that many people here in this convention hall and around the country are disappointed about the final results of the nominating process. I think it’s fair to say that no one is more disappointed than I am,” he told delegates. “But to all of our supporters – here and around the country – I hope you take enormous pride in the historical accomplishments we have achieved.”

Sanders argued that, despite his differences with Clinton during the primary campaign, her views are far more in line with his than are Republican nominee Trump’s – on issues ranging from the minimum wage to climate change to college tuition costs.

“It is no secret that Hillary Clinton and I disagree on a number of issues,” he said. But Sanders said they have come together on some of them, and his side was able to win major changes to the party platform.

“Hillary Clinton will make an outstanding president and I am proud to stand with her tonight,” Sanders said, though some in the audience still booed at Clinton’s name.

Trump, tweeting from the sidelines, fired back:

Sanders was joined by Massachusetts Sen. Elizabeth Warren in appealing to the left wing of the party to unite behind Clinton. First lady Michelle Obama, too, worked to ease the tensions in the convention hall in an earlier speech that at times seemed to rally the divided crowd.

She called Trump a "man who inherited a fortune from his father” and cares only for himself.

"Donald Trump has no real plans for jobs, for college kids, for seniors. No plans to make anything great for anyone except rich guys like Donald Trump."

The liberal icon, who spoke right before Sanders, still faced small pockets of unrest as she delivered a full-throated Clinton endorsement, with some people chanting “we trusted you” over her remarks. But Warren called Clinton “a woman who fights for all of us.”

How Bernie Supporters Would Vote in the General Election | FindTheData.org

Together, the two speakers had an opportunity to tamp down the unrest among liberal activists, many of whom not only backed Sanders during the turbulent primary battle but wanted to either see Warren step into the ring or be tapped for running mate. Whether their words can now help calm the storm inside and outside the convention hall remains to be seen.

Sanders’ speech could help. “It was a very unifying message, the essence of unity,” Kit Andrews, a Vermont alternate delegate and Sanders supporter, told FoxNews.com. “It’s a long process to bring people together. He has always said that.”

Sanders and Warren, along with Michelle Obama and Clinton booster New Jersey Sen. Cory Booker, addressed the convention at the close of a noisy and boisterous Monday session. From the very start, Sanders supporters booed and jeered convention officials as they tried to gavel in.

Rep. Marcia Fudge, D-Ohio, who was presiding, scolded the protesters as they interrupted at the very mention of Clinton.

“We are all Democrats, and we need to act like it,” she said.

“I’m with her,” Obama declared, asking Democrats to do for the former secretary of state what they did for her husband – and turn out to the polls.

“Between now and November, we need to do what we did eight years ago and four years ago. … We need to get out every vote!” she said. “Let’s get to work.”

The audience remained visibly divided during her remarks, however, with one man being shushed for saying, “We love you, Michelle.”

Obama didn't leave the stage without taking a veiled shot at Trump. She warned that the White House couldn't be in the hands of someone with a "thin skin or tendency to lash out or someone who tells voters the country could be great again.

Booker, who had been considered for running mate before the job went to Virginia Sen. Tim Kaine, earlier blasted Republican nominee Donald Trump while touting Clinton’s support for a “fair wage” and “debt-free college” – and trying to connect her ideals to Sanders’.

Even before the disruptions in the arena, the convention had kicked off Monday under a cloud of controversy -- after the leak of emails indicating an anti-Bernie Sanders bias inside the DNC forced the resignation of Chairwoman Debbie Wasserman Schultz.

She had been expected to open the convention anyway, but after facing continued backlash from Sanders supporters Monday morning was replaced in that role by Baltimore Mayor Stephanie Rawlings-Blake.

Anti-Clinton sentiment, however, continued to run high inside and outside the convention site, as pro-Sanders and other demonstrators marched from Camden to downtown Philadelphia and ultimately toward the arena – all while the convention was gaveling in. Inside the hall, Sanders supporters jeered Democratic officials trying to move the proceedings along.

The developments added up to a far more chaotic start than at the Republicans’ convention a week ago in Cleveland. Trump, from the sidelines, stoked the unrest inside the Democratic ranks by tweeting about how Bernie Sanders had been mistreated by the party.

He tweeted before the convention start: “The Democrats are in a total meltdown but the biased media will say how great they are doing! E-mails say the rigged system is alive & well!”