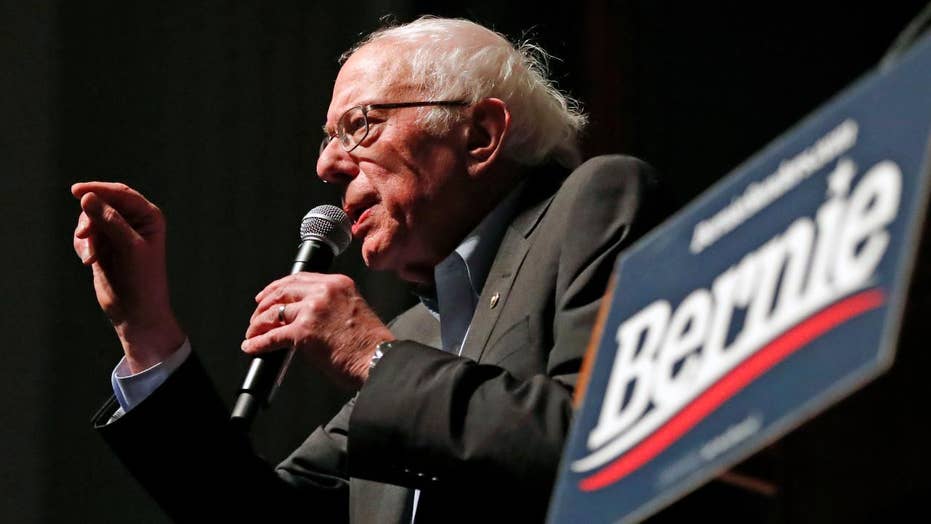 DES MOINES, Iowa – Looking out at a sea of supporters, Bernie Sanders boldly predicted victory ahead of Monday night's Iowa caucuses -- which will mark the first test of whether the fiery populist can achieve in 2020 what eluded him four years ago.

“We are going to win this election because we have the strongest grassroots movement in modern American history,” the insurgent and now-surging presidential candidate proclaimed as he spoke on Saturday night to more than 3,000 people at a campaign rally and concert in Cedar Rapids, Iowa.

SANDERS PROFITS FROM ADS IN IOWA THAT ATTACK HIM

His campaign quickly touted that it was the largest rally of any Democratic presidential contender this cycle in the Hawkeye State.

“It all begins in Iowa in two nights. So tonight I am here for your support on caucus night,” Sanders emphasized.

The gathering – coming just 48 hours before the first contest in the long road to the White House – was another sign of the Sanders surge in the race for the Democratic nomination.

Crowd sizes are one way to gauge the momentum – two others are polls and fundraising figures.

The independent Vermont senator who’s making his second straight bid for the Democratic nod has soared in polls in Iowa the past couple of months. In October and the first half of November, Sanders was in the mid-teens in the Real Clear Politics average of the latest Iowa Democratic caucus surveys, trailing two key rivals – former Vice President Joe Biden and fellow progressive rock star Sen. Elizabeth Warren of Massachusetts.

But Sanders' numbers edged up to the upper teens by December and skyrocketed in January. He now stands at 24 percent support among likely Democratic caucus-goers in the latest RCP average, ahead of Biden at 20 percent, former South Bend, Ind., Mayor Pete Buttigieg at 16 percent and Warren at 15 percent.

None of this happened by accident. As the candidate fights to consolidate the party's left flank, his campaign has deftly leveraged its grassroots fundraising machine, enthusiastic volunteers and famous political surrogates to get out the vote even as the senator himself has been stuck in Washington for much of the final stretch.

In the campaign cash battle, Sanders easily outraised his rivals in the fourth quarter of 2019, hauling in an eye-popping $34.5 million – almost entirely from people-powered small-dollar grassroots donations.

But more importantly, he spent the money, shelling out a whopping $50 million the final three months of last year to beef up his campaign and set the stage for this moment. The Sanders campaign spent roughly $4.1 million to run ads in Iowa in the month leading up to the caucuses – far more than any other campaign – according to data provided by ad-tracking firm Advertising Analytics.

But Sanders also used his war chest to beef up his grassroots outreach.

And hours later, in Cedar Rapids, he touted that “I am so proud to tell you that here in Iowa in the last month alone, our volunteers have knocked on 500,000 doors.”

Bernie Sanders volunteers learn how to canvass and phone bank at a training session at a Sanders campaign field office in Des Moines, Iowa on Jan. 31, 2020

Sanders’ campaign tells Fox News that they now have 22 field offices across the state, with over 200 field staff on the ground

“We’ve got staff who are literally in every corner of the state,” Sanders’ Iowa field director Brooke Adams said. “We have over 150 staging locations, which are kind of like pop-up offices throughout the state where our staff and our top volunteers will meet up for shift times to launch canvasses so that we have organizing operations going in every single county to turn out Iowans.”

The Sanders campaign isn’t the only one with a formidable organization in Iowa. But asked what sets the Sanders campaign apart from its rivals, Adams pointed to staffers and volunteers and stressed that “there is an unprecedented level of energy right now.”

Some of those volunteers have come a long way to help out Sanders.

Koelen Andrews traveled from Los Angeles to Iowa to volunteer for Bernie Sanders campaign. He spoke with Fox News on Jan. 31 in Des Moines, Iowa

Koelen Andrews traveled from Los Angeles a week ago on his own dime. He’s been canvassing and phone banking for the campaign out of a Des Moines field office.

“I believe in Bernie Sanders,” Andrews said when asked why he dug into his savings to take time off and come all the way to Iowa from California.

The Iowa voter, who had at one time considered backing Warren, drove nearly two hours from Cedar Falls to suburban Des Moines on Friday to attend a large Sanders rally and concert.

“He’s the only candidate who can beat Trump,” she said. And pointing to the Trump campaign and the Republicans, she insisted that “they don’t have any dirt on Bernie.”

Her husband Charles said he’s noticed the Sanders surge. His take: “I feel like he’s making all the right moves … he speaks to the common person.”

Sanders seemed to take off after returning to the campaign trail in October after the 78-year-old candidate suffered a heart attack.

“I think his heart attack honestly sent a jolt through his supporters and reminded them this is the time to do this,” longtime Iowa based Democratic consultant Jeff Link noted.

Link, a veteran of numerous presidential and Senate campaigns in Iowa, noted that Sanders started with a leg up in Iowa – thanks to his 2016 showing when he narrowly lost to eventual nominee Hillary Clinton in that year’s caucuses.

“The Sanders campaign was the big innovator in 2016. They really made texting for organization purposes a big part of their operation and no one had really done that before,” he said.

And Link highlighted that the Sanders campaign in Iowa is “smarter and better than they were in 2016.”

This has some in the party nervous, amid worries about the democratic socialist's general election appeal -- his multi-trillion-dollar plans, his uncompromising approach to governing, his history of qualified praise regarding communist leaders are all ammunition waiting to be used against him. His Democratic rivals already are eager to exploit those concerns. Buttigieg argued in an interview with Fox News on Saturday that he's offering the "full package" of someone who can "govern well and win big," seeking to draw a contrast with Sanders as well as Biden.

Sanders – like rivals Warren and Sens. Amy Klobuchar of Minnesota and Michael Bennet of Colorado – was stuck in Washington in recent weeks, as the senators served as jurors in the impeachment trial of President Trump.

But he had some important help from political friends.

While he was off the campaign trail, the Sanders team brought in some of the biggest progressive rock stars to campaign on his behalf in Iowa. Among them were three members of the so-called ‘Squad’ of freshman House Democrats – Reps. Alexandria Ocasio Cortez of New York, Ilhan Omar of Minnesota, and Rashida Tlaib of Michigan, as well as famed liberal filmmaker Michael Moore.

The surrogates headlined numerous Sanders events while the senator was stuck on Capitol Hill.

Tlaib sparked headlines on Friday night when, responding to recent comments by Clinton that “nobody likes” Sanders, she led the crowd at a large Sanders rally in Clive, Iowa, in booing Clinton.

She later said she had allowed her feelings about Clinton’s explosive remarks “to get the best of me.”

The candidate himself on Saturday morning avoided answering a question by Fox News regarding Tlaib’s booing of Clinton.