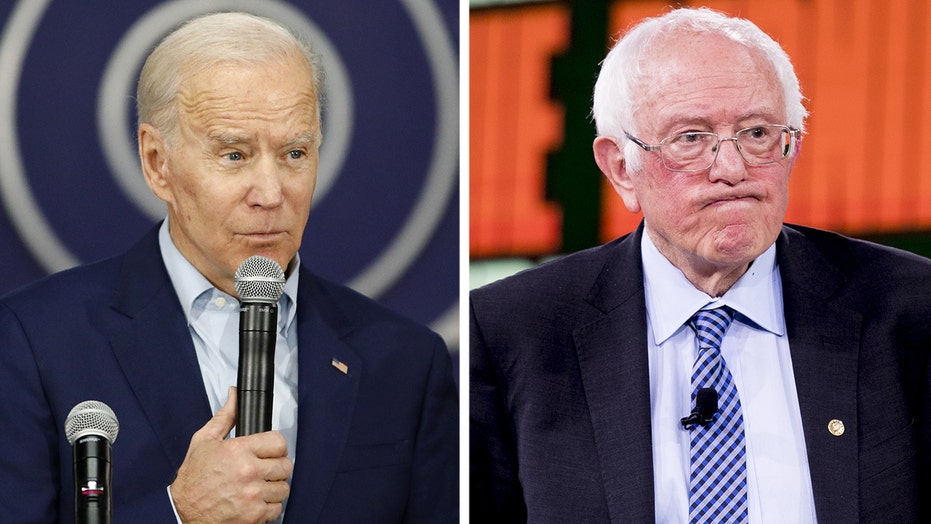 The same Monmouth survey finds 45 percent of those responding are still open to switching their vote; correspondent Peter Doocy reports from Des Moines.

The campaign confirmed to Fox News on Wednesday that Sanders had brought more than $1.3 million since it started fundraising off the negative TV commercial a day earlier. The news was first reported by The New York Times.

The spot is from the pro-Israel lobbying group Democratic Majority for Israel. The group is spending around $675,000 to run the commercial on Iowa airwaves through Monday’s caucuses, which kick off the presidential nominating calendar.

The ad is the first to attack the 78-year-old candidate over his heart attack. Rival campaigns – nervous about likely backlash from voters – have stayed mostly silent on Sanders’ health.

The Sanders campaign went up with an email on Tuesday – ahead of the airing of the ad – warning supporters that the senator was under attack and alluding to an “outside spending group.”

Fox News' Andrew Craft reported that hours later, on Tuesday night, Sanders took to Twitter, putting out a video in which he said, “It is no secret that our campaign is taking on the political establishment and the big-money interests, who are now running negative ads against us in Iowa.”

Former Vice President Joe Biden is discounting a new attack ad aimed at him that’s being paid for by Republican Sen. Rick Scott of Florida.

In the ad, the former Florida governor and Trump ally claims, “The real story here is the corruption that Joe Biden got away with."

Biden shrugged off Republican attacks days out from Iowa's opening Democratic caucuses, saying they indicated who the GOP is most afraid of facing in the general election.

The multimillionaire politician paid for the ad buy out of his own pocket.

Biden –  asked about Scott’s commercial while campaigning in Iowa on Wednesday – told reporters including Fox News’ Madeleine Rivera – that “Rick Scott ... started running negative ads against me. What do you think about that? It’s simple. They’re smearing me to try to stop me.”

Pundits see Scott's ad attacking Biden and slamming the Senate impeachment trial of President Trump as a signal he's interested in a White House bid of his own - in 2024.

The big spenders in Iowa

Steyer is spending nearly $1.4 million to run ads starting Jan. 28. Sanders is shelling out just over $1.2 million. The figures were provided by Advertising Analytics, a well-known ad-tracking firm.

Steyer’s using his vast wealth to bankroll his ad buys, while Sanders is dipping into his massive war chest raised nearly entirely through massive small-dollar grassroots contributions from supporters. Sanders raised an eye-popping $34.5 million in the final three months of 2019, far ahead of the rest of his rivals for the Democratic presidential nomination.

Biden, who has struggled with fundraising since jumping into the White House race last April, is spending just over half a million dollars in the final week, far behind his top-tier rivals. But the pro-Biden super PAC Unite the Country is dishing out nearly $1 million this week to run ads in support of the former vice president.

With five days to go until Iowa’s caucuses, a new poll shows Biden and Sanders fighting for the lead in the state’s Democratic caucuses, with Buttigieg and Warren close behind.

And the Monmouth University survey released Wednesday also indicates that nearly half – 45 percent – of likely Democratic presidential caucuses goers in the Hawkeye State say they are open to switching support on caucus night to another candidate.

Biden stands at 23 percent support and Sanders at 21 percent in the poll, which was conducted Thursday through Monday. The former vice president’s 2-point edge over Sanders is well within the survey’s sampling error.

The poll indicates Klobuchar at 10 percent, with Steyer at 4 percent and Yang at 3 percent. Sen. Michael Bennet of Colorado and Rep. Tulsi Gabbard of Hawaii – who are campaigning heavily in the first primary state of New Hampshire rather than in Iowa – stand at 1 percent, with former Massachusetts Gov. Deval Patrick and former Rep. John Delaney of Maryland registering at less than 1 percent. Former New York City Mayor Mike Bloomberg – who’s skipping the early voting states of Iowa, New Hampshire, Nevada, and South Carolina – was not tested in the Monmouth poll.

Klobuchar said during her 2006 Senate run that "no one wants abortions" and the procedure should be "rare" -- remarks that strike a marked contrast with more recent Democratic stances on the issue, including from her own 2020 campaign.

In the 2006 interview, Klobuchar noted that she was in favor of abortion rights, but she also touted the endorsement of pro-life Democratic Rep. James Oberstar, one of the top boosters of the original Hyde Amendment, in audio archived by Minnesota Public Radio.

"There are plenty of pro-life Democrats and I'm pleased to have the support of Congressman Oberstar and others," she said. "And we need to talk about reducing the number of abortions and making them safe, but making them rare. And there is common ground on encouraging adoption, reducing abortions.”

A day after a video went viral that showed Bloomberg playfully grabbing a dog by the snout - Fox News' Kelly Phares reports the multi-billionaire business and media mogul went up with a new video touting the former New York City mayor’s support among Gotham’s dogs.

The headlines surrounding the encounter – which took place as Bloomberg campaigned Monday in Vermont – spotlighted what appeared to be the presidential candidate shaking the dog’s mouth.

Taking to twitter to spotlight his playful response video, Bloomberg wrote “Dog people get me. Dogs too.”

Bloomberg spokesman Stu Loeser told Fox News on Tuesday that "Mike plays with his dogs, he plays with his kids' dogs, and this video shows him playing with a voter's dog as he became the first candidate to campaign in every Super Tuesday state," Stu Loeser, a spokesman for Bloomberg, told Fox News on Tuesday. "Incidentally, this is how the experts suggest you play with your dogs to train them."