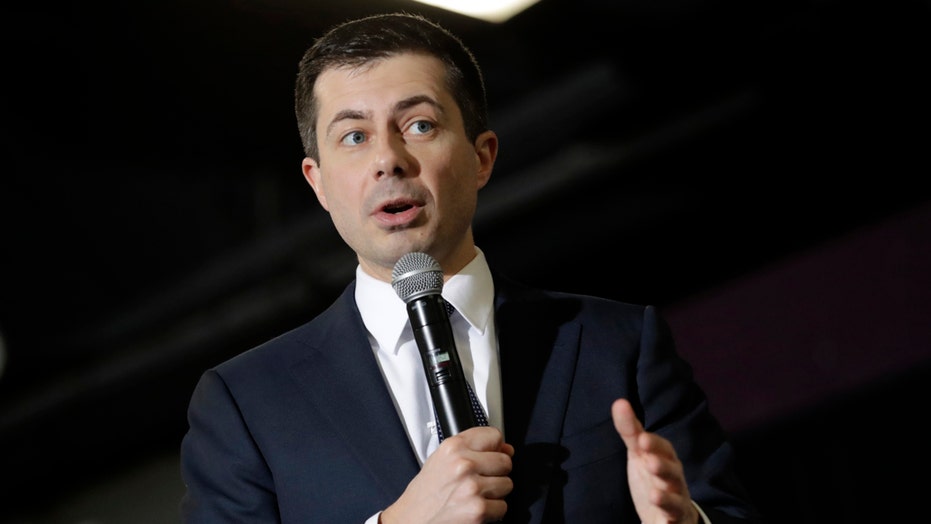 WATERLOO, Iowa – Democratic presidential candidate Pete Buttigieg, while slightly behind the two co-frontrunners in the polls, touted in an exclusive interview with Fox News on Saturday that “we love the position we’re in” with just two days to go until the Iowa caucuses.

And the former South Bend, Indiana mayor took aim at two of his top rivals for the nomination – saying that compared with former Vice President Joe Biden or Sen. Bernie Sanders of Vermont, he’s “offering the full package and the right way to govern well and win big.”

POLL POSITION IN IOWA WITH THE CAUCUSES JUST DAYS AWAY

Buttigieg, who stands a few points back from Biden and Sanders in the latest polls ahead of Monday’s caucuses, has become more aggressive this week in painting a contrast with both rivals as he’s campaigned across the Hawkeye State. And he did it again on Saturday morning as he spoke to nearly 550 people at the Electric Park Ballroom in Waterloo, suggesting Biden was pushing the politics of yesterday.

Asked about Buttigieg’s jabs, Biden responded on Thursday during a stop in Pella, Iowa that Buttigieg’s “a good guy” but “he must be deciding things are getting a little tight.”

Buttigieg, speaking with Fox News before the town hall, argued that “we love the position we’re in.”

And looking to the caucuses closing in, he emphasized that “I see that caucus-goers are making that final choice and want them to know that they don’t have to choose between the best way to govern and the best way to win. And I’m making it very clear in an honest and respectful, but the very real difference of approach of why compared to Senator Sanders or Vice President Biden or any of the others I’m offering the full package and the right way to govern well and win big.”

Candidates need to reach 15 percent support at the individual caucus precincts across the state on Monday night to be viable. If they fail to reach that threshold, their supporters during a second round of voting at the caucus sites can flock to candidates who’ve topped the 15 percent criteria. It’s likely Buttigieg will make the cut.

Asked of his game plan to court supporters of candidates who didn’t reach viability, Buttigieg told Fox News “of course I want to be the first choice. But I also want to make sure that everybody knows that they are welcome in our corner and if their first choice doesn’t make it, we represent a campaign that is positioned to defeat Donald Trump and to welcome everybody in supporting that effort.”

Buttigieg also took aim at President Trump, who with an acquittal in his impeachment trial all but certain next week, has increasingly touted that he’s been exonerated.

The president has tweeted in recent days “GAME OVER!” and described himself as “America’s Greatest President.”

Buttigieg pushed back against the GOP incumbent, saying “well it’s just not true and at the end of the day this is not only about the president’s abuse of power, this is about our everyday lives and a president who's turned his back on farmers. This is a chance to make sure we run an election that’s not just about him, but more than anything is about us.”