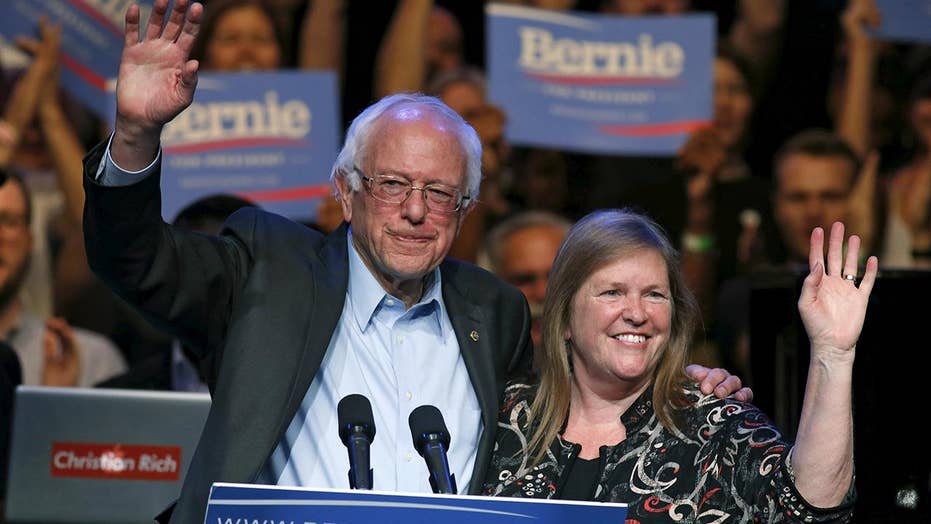 Why have Bernie and Jane Sanders hired lawyers?

Jane Sanders, wife of former Democratic presidential candidate and Vermont Senator Bernie Sanders, is the subject of an FBI probe, dating back to her tenure as president of Burlington College. Sen. Sanders calls the investigation 'nonsense'

Sen. Bernie Sanders’ wife is under federal investigation for allegedly making fraudulent claims and promises while trying to secure financing for the now-defunct college she led.

Jane O’Meara Sanders and her husband have reportedly hired defense attorneys amid the FBI probe.

From marrying the Vermont senator to heading Burlington College, here’s a look at who Jane O’Meara Sanders is.

Like her husband, Sanders, 67, grew up in Brooklyn, New York — although the two did not known each other while they lived the borough, according to a 2015 profile in The Hill.

The two eventually met in Burlington, Vt., as Bernie Sanders was first campaigning for mayor.

"I went with the Neighborhood Organization folks to a meeting with the then Mayor and they asked questions. I didn't feel we were getting direct answers, so I started asking questions. They said, 'You sound like Bernie Sanders now!' I sat down and said, 'Who's Bernie Sanders?' They said, 'He's running for mayor.' I said, 'Let's organize a debate.' So we did. ... [W]hen I heard him speak, well, that was it. ... We met at the victory party, and that was the beginning of forever,” Sanders said, according to The Hill.

The couple married in a civil ceremony in 1988 after being together for seven years.

Sanders has three children with her ex-husband, David Driscoll. She and Driscoll also took in foster children, according to a New York Times profile, which strained the marriage that ultimately ended in divorce.

Sanders has a degree in social work from Goddard College, a private nontraditional institution in Vermont, and a doctorate from the Union Institute, a private research school that specializes in distance learning.

She reportedly grew up Catholic.

FILE--In this July 28, 2016 file photo, Sen. Bernie Sanders, I-Vt. and his wife Jane walk through downtown in Philadelphia during the final day of the Democratic National Convention. Sanders and his wife Jane O'Meara Sanders have hired lawyers in the face of federal investigations into the finances of the now-defunct Burlington College, which closed last year due, many feel, to debts incurred when Jane Sanders entered into an ill-advised real estate deal. (AP Photo/John Minchillo, File) (AP)

“The purpose is to revitalize democracy in the support of progressive institutions,” she told the Washington Post at the time. “Our feeling is at our point in time, our country is at a crossroads, and people are engaged in a political process that can be opaque. A vital democracy requires an informed electorate, civil discourse and bold thinking. So we put together this team to focus on issues, but not in a partisan way, not in a way that just focuses on the latest crazy thing. It will not be about Trump; it will be about the issues facing the country.”

Sanders operated as her husband’s unpaid chief of staff and policy adviser when he was in Congress, according to a 1996 Washington Post profile.

The Washington Post also credited Sanders with writing more than 50 pieces of legislation and helping her husband form the congressional Progressive Caucus.

“She was involved all the way through,” Kathy Lawrence, who used to work in the youth office with Sanders, told the New York Times. “They had long days and then out to meetings at night.”

She participated in a march to remember Freddie Gray, the young black man fatally injured while in police custody. She helped her husband with campaign ads and debate preparation. She acted as a campaign surrogate.

“She has his ear like no one else in discussions at a very high level,” he said. “She speaks for Bernie, and it’s not just because she’s his wife.”

In 2010, Sanders was president of the tiny Burlington College when she brokered a $10 million deal for the college to buy the last undeveloped parcel of land in Burlington on the Lake Champlain waterfront — 32 acres overlooking the lake and the 77,000-square-foot former orphanage and administrative offices of Vermont's Roman Catholic Church, which needed the money to settle a series of priest sex abuse cases.

At the time Sanders promised the deal would be paid for with increases in enrollment from about 180 to 500 students and $2.7 million in donations. She left the college in 2011.

"Together, I think it is safe to say we turned the corner," she wrote in an Oct. 12, 2011, memo to the college’s board. "We've got many opportunities before us, but we need to realize them to continue our momentum."

But the increase in the size of the student body and the promised donations didn't materialize.

“She has his ear like no one else in discussions at a very high level. She speaks for Bernie, and it’s not just because she’s his wife.”

By 2014, the college had about $11 million in debt, and the only significant asset it had was the land. The college ended up selling much of the land, which is now being developed. The college closed for good in 2016.

In January 2016, attorney Brady Toensing, who served as the Vermont campaign chairman for Donald Trump during his run for president, filed a complaint. He alleged a loan used by the college to buy the land "involved the overstatement and misrepresentation of nearly $2 million ... in what were purported to be confirmed contributions and grants to the college."

In a follow-up letter in May 2016, Toensing, who in the past has filed complaints against Democrats and members of Vermont's Progressive Party, said that as a result of his original complaint he was "approached and informed that Senator Bernie Sanders's office improperly pressured" the bank to approve the loan.

As is typical in most cases, federal law enforcement won't confirm nor deny an investigation.

The Sanders' spokesman, Jeff Weaver, who was the senator's 2016 presidential campaign manager, said the allegations that prompted the investigation were politically motivated attacks.

"She was working to take the college to the next level with the land purchase," Weaver said. "People can Monday morning quarterback it if they want, that's for sure. But what her intent was was to turn Burlington College into a world-class liberal arts college in Burlington for the benefit of the community."