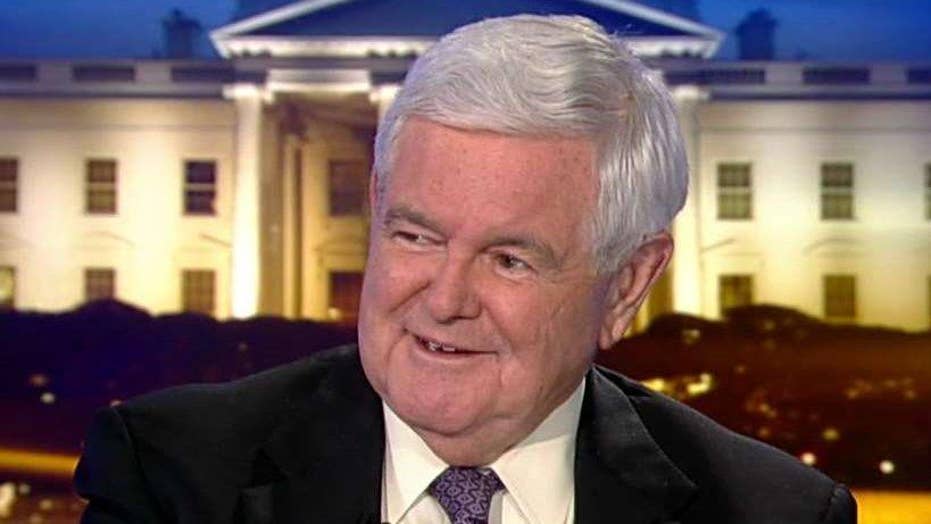 Gingrich: Trump is a gut-fighter, it's instinctual

Former House speaker on Trump's controversial tweet about Mika Brzezinski: If you hit him, he will hit you back, but you wonder why he undercut himself #Tucker

White House spokeswoman Sarah Sanders did not back down from defending President Trump on Thursday against what was becoming a bipartisan rebuke of his morning tweet mocking MSNBC co-host Mika Brzezinski over a supposed face-lift.

“I don’t think it’s a surprise to anybody that he fights fire with fire,” Sanders said of the president, answering a barrage of questions about the Twitter battle at the White House briefing.

The president’s often-caustic Twitter sparring sessions are nothing new, but Thursday morning’s putdown of the “Morning Joe” hosts was seen by some lawmakers and media personalities as a step too far.

Speaking of Joe Scarborough and Brzezinski, he wrote in a pair of tweets: “I heard poorly rated @Morning_Joe speaks badly of me (don’t watch anymore). Then how come low I.Q. Crazy Mika, along with Psycho Joe, came to Mar-a-Lago 3 nights in a row around New Year’s Eve, and insisted on joining me. She was bleeding badly from a face-lift. I said no!”

Congressional lawmakers on both sides of the aisle chided the president for the personal attack.

"Obviously, I don't see that as an appropriate comment," House Speaker Paul Ryan said, joining a chorus that included Sens. Ben Sasse, Lindsey Graham and John McCain. "What we're trying to do around here is improve the tone, the civility, of the debate; and this obviously doesn't help do that."

The co-hosts also shot back and MSNBC said in a statement: "It's a sad day for America when the president spends his time bullying, lying and spewing petty personal attacks instead of doing his job."

But Sanders was steadfast in maintaining Trump did not go too far.

She accused the show of attacking him “mercilessly” and said, “I guess it’s kind of like we’re living in the ‘Twilight Zone.’ They do this day after day after day.”

She also said some want to cast his tweet only as an attack on a woman, but countered, “What about the constant attacks that he receives? ... I’m a woman and I’ve been attacked by this show multiple times.”

As more reporters started shouting questions on the tweets, Sanders tried to move on.

The controversy, though, threatens to distract for now from the president’s primary policy goals of getting a health care bill passed through the Senate and pushing for passage of a pair of anti-illegal immigration bills.

Earlier in the day, Brzezinski appeared to respond with a photo of a cereal box featuring a young girl pointing to the words “Made For Little Hands.” The jab was a throwback to 2016's mockery of Trump's hand size.

Scarborough simply retweeted a sarcastic remark referencing the once-floated anti cyber-bullying campaign that had briefly been attached to first lady Melania Trump and also a tweet from law professor Laurence Tribe featuring a gif of Trump mocking another reporter.

A spokesperson for the first lady said in a statement: "As the First Lady has stated publicly in the past, when her husband gets attacked, he will punch back 10 times harder."

During the Republican primaries, Trump had a cozy relationship with the “Morning Joe” hosts. But as Trump ascended to the position of likely nominee and then the official Republican standard-bearer, Scarborough and Brzezinski turned more critical and Trump stopped his semi-regular call-ins to the show.

After Trump won the presidency, the relationship initially seemed back on track, with Scarborough and Brzezinski – who are engaged – even visiting Trump at his Mar-a-Lago club, the meeting Trump ostensibly referred to in his tweets. A story about the couple’s engagement even featured an anecdote wherein Trump offered to officiate their wedding.

More recently, however, Scarborough and Brzezinski have again begun knocking Trump – even going so far as to question his mental state.

On Thursday morning, Brzezinski went on an extended diatribe urging Trump’s Cabinet members to stand up to him.

“Everybody in Washington, in the administration, needs to look at this from, I think, a point of view where they’re not lobotomized because you’re sitting in there and you’re so scared of him, and you think you need to suck up to the president,” Brzezinski said. “You need to look at this like any company.”

She added: “Let’s say someone came into NBC and took over NBC, and started tweeting wildly about people’s appearances, bullying people, talking about people in the competition, lying every day, undermining his managers, throwing them under the (bus) — that person would be thrown out. It’s just not normal behavior. In fact, there would be concerns that the person who runs the company is out of his mind.”

It’s unclear, however, if Trump saw the critique, as he tweeted that he no longer watched the program.