Police in Hialeah, Florida, have arrested a second suspect for an alleged assault on a canvasser for Sen. Marco Rubio, R-Fla., that took place Sunday night.

According to an arrest affidavit obtained by Fox News Digital, Jonathan Alexander Casanova joined Javier Lopez in attacking the canvasser. The document also noted that the canvasser told police that Casanova told him he could not pass through the area because he was a Republican.

"After tirelessly working to bring justice to the victim, Hialeah Police Detectives have arrested and charged Jonathan Alexander Casanova for the attack which occurred on Sunday, October 23, 2022," Sgt. Jose Torres said in a statement to Fox News Digital.

The arrest affidavit says that the victim – who has since been identified by local media as Chris Monzon – was walking in the neighborhood handing out fliers for Rubio and Gov. Ron DeSantis when Casanova and Lopez were blocking the sidewalk. Following an argument, the affidavit says, Lopez "rushed the victim and threw him on the ground," and then Casanova "began to kick the victim on the head as he was on the ground." While Casanova kicked him, Lopez punched Monzon in the head, police said.

Jonathan Casanova was arrested in connection with an attack on a canvasser for Sen. Marco Rubio (Hialeah Police Department)

The affidavit says a witness then pulled Casanova off of Monzon, and then Casanova released two German shepherds from his car and walked with them over to Monzon, who was on the ground, and "began to give commands to the dogs to attack and bite" him.

The police document says neighbors eventually separated everyone involved, but Casanova fled before officers arrived at the scene. 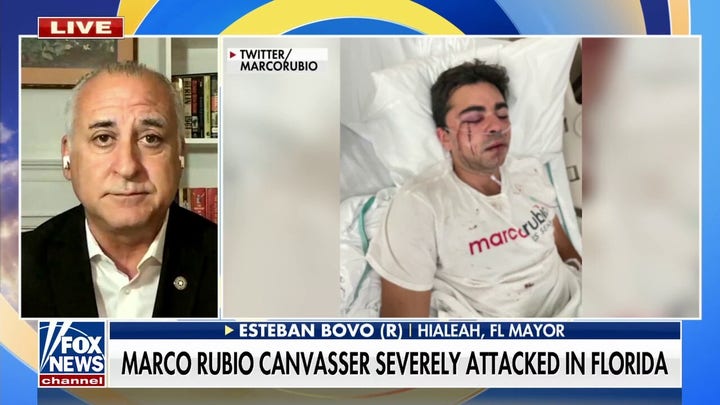 Monzon said in the statement that he tried to walk around Casanova and Lopez but that Casanova then told him he was not allowed to walk around the neighborhood and threatened to shoot him if he continued. Monzon then said he was on public property.

According to the affidavit, surveillance video corroborated Monzon's "sequence of events."

It also noted that Monzon suffered a fractured orbital bone, "nasal/sinus fractures," and "other underlying injuries."

Torres said that "intelligence gathered by detectives" led to police locating Casanova at a park in Miami Beach, where they apprehended him.

The incident drew national attention after Rubio tweeted about it on Monday. The GOP senator said at the time that the canvasser was attacked by "4 animals." It is unclear if this meant that more suspects were believed to be involved or if this referred to Lopez, Casanova, and the two dogs.

When asked by Fox News if police are looking into any more suspects, Torres said that their "investigation continues."

"Detectives are pending other witness statements and video. We want to make sure that every person involved in the beating is brought to Justice," Torres said.

Rubio's tweet also said that the alleged attackers said Republicans were not allowed in their neighborhood. Initially, police said they had not determined if the attack was politically motivated, and Lopez's arrest affidavit did not mention any remarks about political parties.

Monzon's statement, as described in the Casanova affidavit, appears to support Rubio's description of the attack as politically motivated, at least as far as Casanova is concerned. Lopez's mother told the Miami Herald on Tuesday that her son has never voted and that what happened was unrelated to politics.