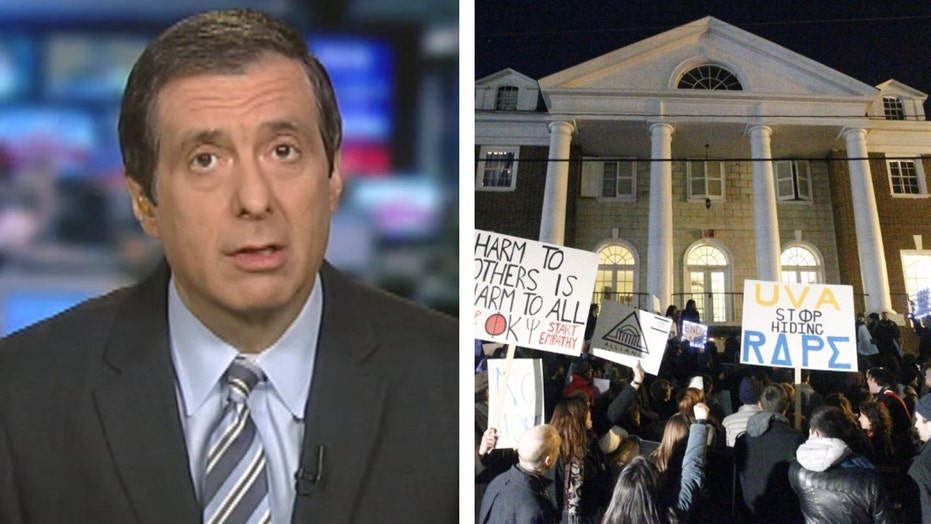 It sounds like hyperbole to say that a single Rolling Stone article rocked the University of Virginia campus.

But in reporting graphic and horrifying details of what was described as a gang rape at a frat party, the school has been plunged into serious soul-searching, an internal investigation, and has temporary banned all its fraternities and sororities.

The story is told from the perspective of the alleged victim, identified only by her first name, with passages like these: “Jackie began to scream. ‘Shut up,’ she heard a man's voice say as a body barreled into her, tripping her backward and sending them both crashing through a low glass table.”

Now, however, some serious questions are being raised about the way the story was reported. I am not questioning whether this rape took place; indeed, there is no way to verify what happened because no one is fully identified in the story. Not Jackie, not the seven men who are said to have brutally attacked her. And that is part of the problem.

The reporter, contributing editor Sabrina Rubin Erdely, told Slate she could not get in touch with the alleged assailants. “I reached out to [the accused] in multiple ways,” she said. “They were kind of hard to get in touch with because [the fraternity’s] contact page was pretty outdated.

It doesn’t sound to me like she tried that hard, given the gravity of the allegations. News organizations generally make strenuous efforts to contact someone before publishing an accusation of criminal behavior. And while the men are not named, the article contains clues to some of their identities.

What’s more, Erdely has said she promised Jackie she would not identify the men — a very strange agreement, in my view.

Erdely told the Washington Post that she did not identify any of the alleged attackers “by Jackie’s request. She asked me not to name the individuals because she’s so fearful of them. That was something we agreed on.”

Erdely also defended herself to the New York Times, saying: “I am convinced that it could not have been done any other way, or any better. I am also not interested in diverting the conversation away from the point of the piece itself.”

On that point, I’m afraid she doesn’t have a choice. If you write a story about a violent and appalling gang rape at a campus designed by Thomas Jefferson, and you don’t name anyone in the piece, reasonable questions are going to be asked.

Erdely, who has written for the New Yorker and Mother Jones and lists “sexual violence” as one of her areas of expertise, did not respond to my request for an interview.

Some of the credit for the recent scrutiny goes to Richard Bradley, a former editor of the now-defunct George magazine. He has credentials on the issue because he was among the editors who was scammed by serial fabricator Stephen Glass.

Bradley writes of the Rolling Stone piece: “I’m not sure that I believe it. I’m not convinced that this gang rape actually happened. Something about this story doesn’t feel right…

“Remember: One must be most critical about stories that play into existing biases. And this story nourishes a lot of them: biases against fraternities, against men, against the South; biases about the naivete of young women, especially Southern women; pre-existing beliefs about the prevalence—indeed, the existence—of rape culture; extant suspicions about the hostility of university bureaucracies to sexual assault complaints that can produce unflattering publicity.”

Bradley also zeroes in on this: “Then there’s the fact that Jackie apparently knew two of her rapists, but they are not named, nor does Rubin Erdley contact them, which is basically a cardinal rule of journalism.”

“Sean Woods, her editor, was willing to talk. This was Jackie’s story, he said; it was clearly presented as such. ‘The piece was carefully fact-checked,’ he added. He didn’t talk to Jackie himself but the fact-checker did, and ‘we found Jackie credible.’ He points out that, in the article, Erdely cites other undergraduate women with similar stories; though most of them aren’t named either, ‘we have text messages from those girls. They didn’t want to come forward but we verified who they were.’ Besides, he said, since the article came out, several UVA women have also come forward with their stories of rape. ‘I hold Sabrina in the highest regard,’ said Woods. ‘She’s an excellent reporter. She’s one of the most diligent upright people. I know she’s gonna dot her I’s and cross her T’s.’ Woods also confirmed that Erdely didn’t contact the alleged rapists out of respect for Jackie’s wishes.”

So where does this leave us?

Jackie never filed a complaint after the alleged attack in 2012, but the Charlottesville police are now investigating the case. Perhaps that probe will help clarify things.

What we have now is the account of one person who says she was subjected to a terrible and criminal ordeal—but that story has not been tested against any account from any of them men accused of a terrible crime.

Some skeptics are calling it a hoax, citing the bogus case against the Duke lacrosse players. I’m not going there. But the way this story was reported raises some fundamental journalistic questions that need to be answered.