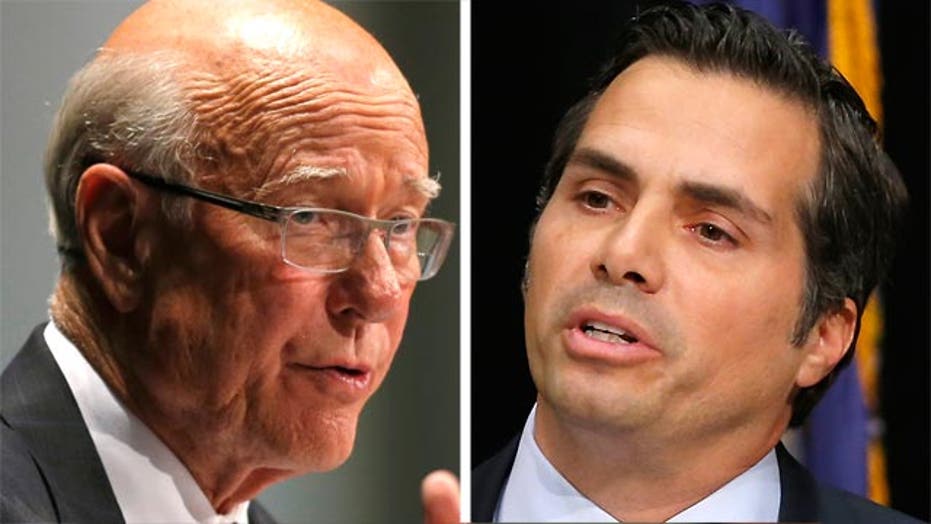 Inside the closely watched race

Pat Roberts is coming back swinging after the Republican Kansas senator was thrown several weeks ago into a competitive contest thanks to a surprise change-up in the race. Now, dusting himself off, he's hammering his rival as an "amorphous" and "Jell-O"-like politician whose time in the spotlight won't last.

"We're gonna win it, because when people find out that my opponent [is] a liberal Democrat, it's over," Roberts told Fox News.

Roberts' rival is Greg Orman, who is running as an independent in the race. Not many independents are in contention this year, but Orman's star rose after the Democratic nominee mysteriously dropped out. When all three were in the race, Roberts led consistently in the polls. Now, the GOP senator is locked in a tight race against Orman.

But as Orman declines to publicly identify with either party, Roberts is hitting the message that he's really a closet liberal. The three-term senator spoke to Fox News in an exclusive interview onboard his campaign bus with fellow Republican Sens. Ted Cruz of Texas and Tom Coburn of Oklahoma. The two senators joined Roberts as he began a four-day bus tour across the state.

The senator, after trailing against Orman in recent polls, is buoyed by the latest findings in a Fox News poll showing him with a 5-point lead. He claims voters will begin to support him more once they learn more about Orman.

"Well, who would you vote for for leader?" Roberts continued. "What party would you associate with? And his answer is neither."

After Roberts faced a tough primary against fellow Republican Milton Wolf, Cruz told Kansans on Thursday it was time to come home to Roberts.

"I know we had a bitter primary in this state," Cruz said. "That's good in the democratic process, it's good to have a contest where the people engage, but that primary is over and now it's important for folks to come together."

Cruz and Coburn are just the latest high-profile Republicans appearing in the Sunflower State to boost Roberts.

Republicans never expected this race to be a toss-up. The party assumed Roberts had an easy path to reelection in the deep red state. Now, if Roberts loses, it will hurt Republicans' chances of picking up the six seats needed to regain the majority in the Senate.

The race became competitive after Democrat Chad Taylor controversially dropped out last month. Taylor went all the way to the Kansas Supreme Court to make sure his name was removed from the ballot. Democrats have chosen not to name a replacement candidate.

That left Orman as Roberts' sole challenger, and he's taken advantage of it by tying Roberts to the gridlock in Washington, D.C.

"Pat Roberts will repeatedly tell you that President Obama and Harry Reid are the reason Washington is such a mess and you know what, he's half right, but the other half of the mess, Mitch McConnell and Pat Roberts," Orman said at a debate Wednesday in Overland Park.

Orman tells voters he'll go to Washington to solve problems, not be a partisan politician.

The businessman ran against Roberts in 2008 as a Democrat before dropping out ahead of the filing deadline. Orman also has donated money to Hillary Clinton, President Obama and the National Republican Congressional Committee. He said voted for Obama in 2008 and Mitt Romney in 2012.

Orman campaign aides did not return multiple calls and emails requesting an interview or provide a list of upcoming campaign events. The campaign has been posting photos on social media after events have ended.