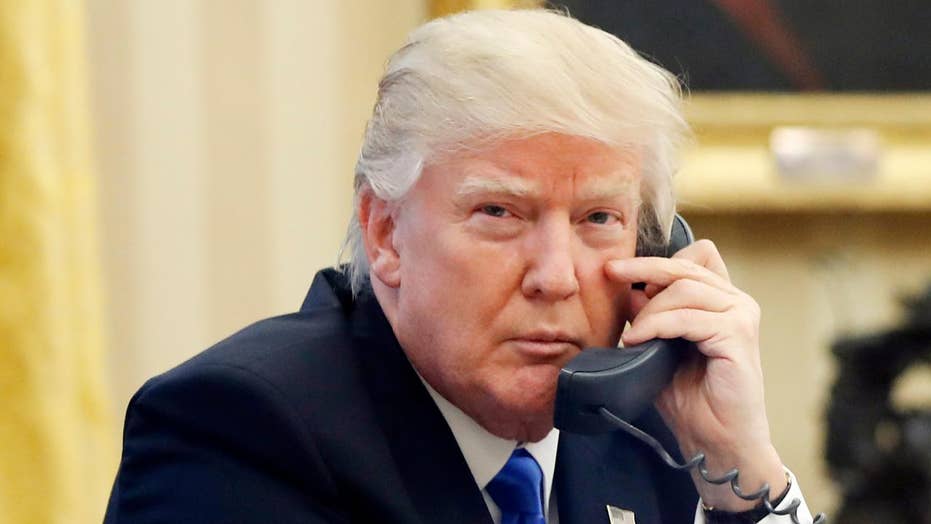 PALM BEACH, Fla. – President Trump on Saturday denounced the leaks of transcripts of his telephone conversations with leaders of Australia and Mexico as “disgraceful” and said his administration was searching “very, very hard” for the leakers.

Trump, speaking to Fox News, accused “Obama people” of giving news organizations embarrassing details of his recent tense phone conversations with his Australian and Mexican counterparts, and said that the holdovers from the Obama administration still serving on his White House and National Security Council staff were being replaced.

“It’s a disgrace that they leaked because it’s very much against our country,” Trump said, without stating why he believed that career civil servants who work in Democratic and Republican administrations were the source of the leaks. “It’s a very dangerous thing for this country,” he said.

Trump said that media reports of what appeared to be angry exchanges between him and the two foreign leaders had been mischaracterized, and insisted that he had “positive” relations with both countries and their leaders.

Meanwhile, hours before a federal judge in San Francisco turned down the Trump administration’s request to reinstate travel restrictions on refugees and foreign travelers, President Trump defended his administration’s travel ban, saying the temporary halt was needed while the administration reviewed vetting procedures to prevent “people with bad intentions” from entering the country.

Trump said that the FBI had informed him that the bureau had “1,000 investigations” ongoing into potential terrorist threats and lacked sufficient manpower to pursue them all.

Finally, he disputed press reports which characterized the sanctions he imposed last week on Iran as weak and ineffective. He said that punishing Tehran for violating United Nations Security Council restrictions on ballistic missile testing was “the right thing to do,” and argued that the sanctions were already beginning to constrain Iranian aggression. Iran, he said, was trying to undermine and destabilize U.S. allies by exporting sensitive technology to countries “around the world” and that such aggressive conduct had to be countered. The sanctions were already working, he asserted. “Have you noticed they’ve been very quiet in the last two days?”

Trump made these and other comments in a conversation with three journalists whom he had invited to join him after the 60th annual International Red Cross ball, a fundraiser for the charity that was held this year at his club, Mar-a-Lago.

In his first trip back to his home in Palm Beach since becoming president, Trump answered several questions on wide-ranging topics from this reporter, Christopher Ruddy, founder and chief of Newsmax Media, and Melanie Dickinson, president and publisher of the South Florida Business Journal, an online and print business publication. Trump and his wife Melania lingered on after the ball to mix with admirers and some of the estimated 800 Red Cross supporters attending the black-tie event at Mar-a-lago, which has become known as “The Winter White House.”

While wealthy supporters of the charity rubbed shoulders with one another and clustered around the table occupied by Trump and his wife, eager to congratulate him and take photos with First Couple, some 4,000 people turned out for an anti-Trump march in West Palm Beach. Hundreds of protesters made their way from Trump Tower in West Palm Beach to a staging area near Palm Beach on Bingham Island, and then to the entrance of the exclusive club, where they shouted anti-Trump slogans and yelled chants against the new administration’s policies. Many of the protesters, most of whom were peaceful, carried placards criticizing Trump, his immigration and other policies, and several of his wealthy Cabinet nominees. The protest was among the largest, if not the largest, in recent Palm Beach county history.

Inside the huge ornate ballroom, Trump seemed particularly insistent on disputing the notion that his travel restrictions now being challenged by several courts were unpopular. “They’re very popular,” he insisted. But, he added, he would have imposed them whether or not Americans approved of them. “I’m not doing it for popularity. I’m doing it because our country is like a sieve for people coming in,” he said.

He said that he had learned in his meetings with FBI officials that the bureau was having a difficult time staffing the more than 1,000 investigations it was conducting into potential threats to the country. “There’s no manpower to do them.”

Calls to FBI headquarters regarding the number of ongoing terror investigations were not returned on this Super Bowl Sunday. But last summer, James Comey, the FBI director, testified that the bureau had about 1,000 open terror-related investigations in 2016 and at least one in all of the 50 states. Rep. Peter King, R-N.Y., who follows counter-terrorism efforts closely, confirmed that senior FBI officials have spoken of nearly 1,000 ongoing investigations. John Pistole, the former FBI deputy director, told Fox News last summer that the FBI lacked the resources and legal authority to maintain investigations “on everybody they talk to,” he said. The FBI had perpetrators of the terror attacks carried out in Orlando, San Bernardino, and Boston under surveillance for a time, but closed out their inquiries before the attacks.

Trump said Saturday night that many Americans did not realize the danger posed by America’s “open” borders and insufficient vetting. “You don’t realize it,” he said.

However, groups helping asylum seekers, refugees, and other civil and human rights groups point out that no Americans have been killed in domestic terror attacks by asylum seekers and refugees from the seven Middle Eastern countries with majority Muslim populations who would be barred from entering the U.S. for 120 days while the administration reviews its immigration and vetting policies.

Under Trump’s executive order, refugees from Syria would be permanently barred, exclusions whose legality several civil rights and civil liberties experts and groups have challenged. They also argue that political refugees are already among the most heavily vetted of all immigrants.

“I’m doing this because our country is like a sieve for people coming in,” Trump said.

One former CIA official said that while the administration’s implementation of its executive order was “clumsy, the concerns behind it are real.” But the constitutionality of the executive order seems headed for a Supreme Court challenge.

The FBI also did not return calls for comment Sunday on whether it was conducting an investigation into the leaking of transcripts of the president's telephone calls with foreign leaders. While White House press spokesman Sean Spicer recently said that the president had asked his team to “to look into this because those are very serious implications," Trump had not previously discussed his own view of the embarrassing leaks. His comments Saturday underscored his concern about what has become widespread early on in his administration — the unauthorized distribution of material highlighting numerous exaggerations and false statements by him and senior members of his White House and other incidents that seem to reflect incompetence or inexperience.

Trump seemed particularly anxious to reinforce his spokesman’s descriptions of his conversations with the leaders of Australia and Mexico as “candid," but respectful. Spicer noted that both leaders have disputed some of the details as reported.

Based on the transcripts, the Washington Post and several media outlets, for instance, reported that Trump hung up on Australian Prime Minister Malcolm Turnbull after an angry discussion of a refugee swap negotiated by former President Obama. In a recent interview, Turnbull called his discussion with Trump “frank” but said that Trump had agreed to abide by the refugee swap negotiated by former President Barack Obama. In one interview, he said it had been a "good week" for Australia.

In an earlier call with Mexican President Enrique Pena Nieto, Trump apparently threatened to send the U.S. military to Mexico to stop drug cartels -- according to a transcript published by a Mexican news organization and the Associated Press. The White House later said the comments were intended to be “lighthearted.”