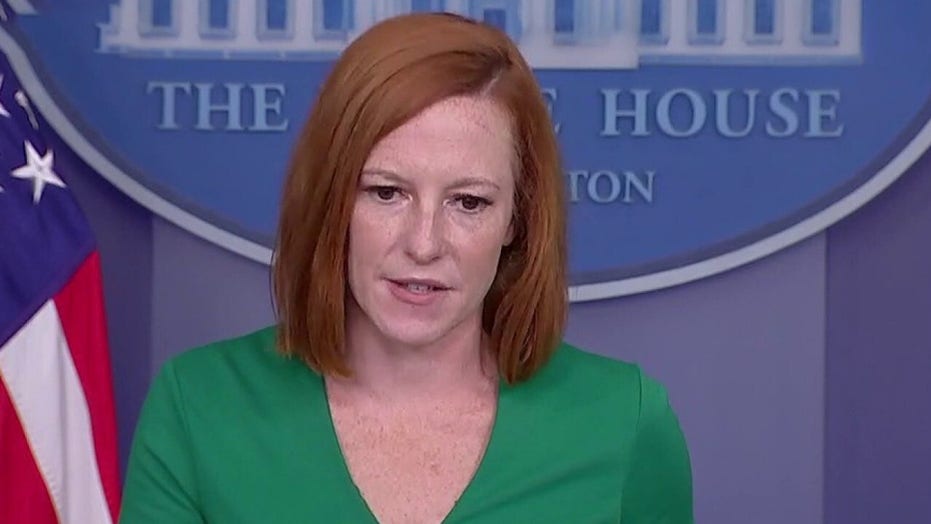 Federal employees could be fired for refusing vaccine mandate without proper exemption: Psaki

Republican members of Congress and state governors were appalled by news Thursday that President Joe Biden will force employers with more than 100 workers to require coronavirus vaccinations or test employees weekly, vowing to block the new policy and terming it unconstitutional.

The mandate, which is expected to affect as many as 100 million Americans in an array of jobs, including health care, directly impacts the private sector.

"This is absolutely unconstitutional," Rep. Thomas Massie, R-Ky, wrote in a tweet, attaching a link to the news.

"Mandates are not the answer," Rep. Neal Dunn, R-Fla., said in response. "Getting the vaccine should be up to you and your doctor — not the federal government."

"All 9 million federal employees should consult with their doctor and make a personal, informed decision about taking the vaccine," wrote Rep. Lauren Boebert, R-Colo. "Instead, Sleepy Joe says take it or else… You don’t lead by coercion. Biden has failed as a leader in every way."

"The federal government has no authority to force businesses in Texas and across the country to mandate their employees get vaccinated. American businesses are still recovering from this past year and a half. It is cruel and burdensome to impose this authoritarian mandate," Sen. Ted Cruz, R-Texas, said in a statement Friday.

"While I support the vaccine and have received it, Americans have the right to exercise personal choice when it comes to their health. Getting the vaccine is a decision to be made in consultation with one’s doctor, not forced on Americans by the government."

"This is exactly the kind of big government overreach we have tried so hard to prevent in Arizona — now the Biden-Harris administration is hammering down on private businesses and individual freedoms in an unprecedented and dangerous way," Ducey wrote. "This will never stand up in court."

"This dictatorial approach is wrong, un-American and will do far more harm than good," Ducey added in another tweet. "How many workers will be displaced? How many kids kept out of classrooms? How many businesses fined? The vaccine is and should be a choice. We must and will push back."

Republican South Dakota Gov. Kristi Noem also weighed in on the news, saying the state is ready to hold the Biden administration legally responsible for the "unconstitutional rule."

"My legal team is standing by ready to file our lawsuit the minute @joebiden files his unconstitutional rule," Noem wrote in a tweet. "This gross example of federal intrusion will not stand."

"Elections have consequences," said Rep. Mo Brooks, R-Ala, as he shared the news on Twitter. "Biden’s mandate underscores how important it is for Americans to know & weigh candidates’ policies when voting. Liberty & freedom are at stake."

"I will be introducing legislation to block this egregious assault on Americans' freedom and liberty," Biggs said. "We must fight against these attempts to force vaccine mandates on the American people."

"This is blatantly unconstitutional," wrote Rep. Barry Moore, R-Ala., in a tweet. "The decision to get vaccinated lies between you and your doctor - NOT the federal government. We must fight back against medical tyranny that dangerously violates Americans' individual freedoms."

"The president's action crosses the line," said Rep. Dusty Johnson, R-S.D. "I believe in the vaccine, but I also believe in a limited federal government. Effectively, this is a national vaccine mandate. Our federal government has never done this before, and it should not do so now."

In a statement to Fox News, Rep. Greg Murphy, R-N.C., who serves as one of only a few practicing physicians in Congress and is a member of the GOP Doctors Caucus, said he is against government vaccine mandates, saying the decision should be made by patients who have consulted with their doctors.

"As I have repeatedly said, the decision about whether or not to take the COVID-19 vaccine, like every other medical decision, is one that should be made between a patient and a doctor," Murphy said. "The government does not know what is best for each patient, nor do they have the authority to dictate patient-doctor health care decisions."