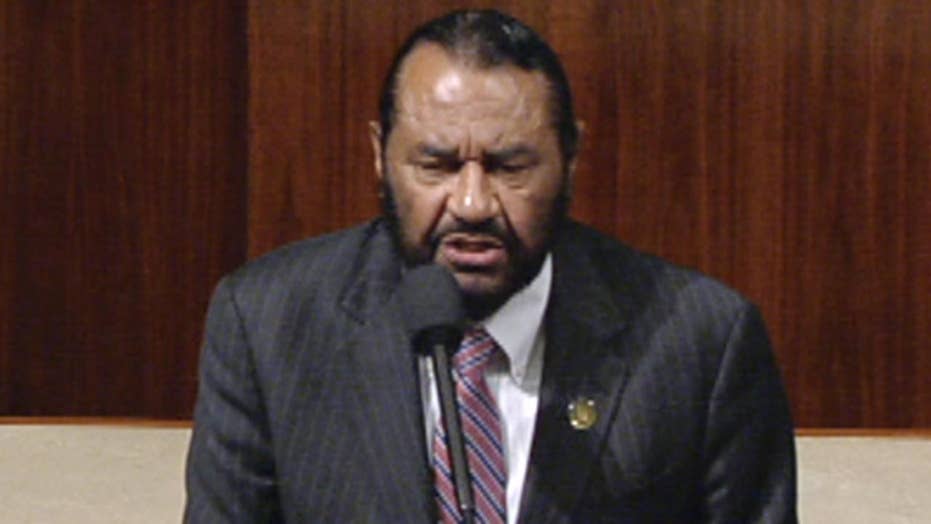 Raw video: Democratic representative from Texas says the president is not above the law

Two Democratic congressmen plan to draft articles of impeachment after accusing President Trump of obstruction of justice, despite a large swath of bipartisan lawmakers warning against a rush to judgment.

The announcement came hours after four crucial intelligence witnesses testified before the Senate Intelligence Committee and fielded questions regarding the Russia probe and possible Trump campaign collusion, and the day before former FBI Director James Comey gives his long-awaited testimony.

“In the spirit of keeping the republic, I have concluded that the president has obstructed justice and in so doing, the remedy for obstruction of justice is impeachment,” Green said. “The president will not be indicted while he is in office, and while there is some merit in talking about the judicial process, the impeachment process is the one that will bring him before the bar of justice.”

Green added: “I will file articles of impeachment to impeach President Donald J. Trump for obstruction of justice.”

Sherman, who only became vocal on the matter Wednesday, told reporters, “I’m not going to be deterred.”

“If this were on the floor today, it would not pass,” Sherman said. “This is going to be a long process.”

Green first called for the president’s impeachment last month, just days after he fired Comey from leading the FBI, even calling for the process on the House floor.

While a small group of congressional Democrats joined in on Green’s efforts, House Vice Democratic Caucus Chairwoman Linda Sanchez, D-Calif., suggested on Wednesday it was too early to begin impeachment.

“The sentiment is that folks are waiting to have the process completed,” Sanchez told Fox News on Wednesday. “A majority of the caucus is of the opinion that we should let the investigation continue to its logical conclusion.”

Last month, House Intelligence Committee Ranking Member Rep. Adam Schiff, D-Calif., said no one should “rush to embrace the most extraordinary remedy for removing a president.”

Democratic Sens. Jon Tester of Montana and Claire McCaskill of Missouri both reiterated the importance of getting the facts first.

“That’s why the FBI needs to do their job, once you get the facts, then you can make a good decision,” Tester said. “If you don’t have facts, you don’t make good decisions.”

“I don’t think it’s time to talk about anything like that until we see the evidence,” McCaskill told Fox News last month.

Other Democratic lawmakers who brought up the option are Reps. John Yarmuth, D-Ky., Mark Pocan, D-Wis., Jared Huffman, D-Calif., and Rep Tulsi Gabbard, D-Hawaii, who warned her constituents at a town hall last month that if Trump were successfully impeached, “the problems don’t go away” because then “you have a Vice President Pence who becomes President Pence.”

Kucinich, who called for the impeachment of President George W. Bush and Vice President Dick Cheney over the decision to go to war in Iraq, told Fox News that this is only an option “after exhausting a number of other options.”

“It is destructive to America to proceed with an impeachment at this stage of the presidency” Kucinich, a Fox News contributor, said last month. “This is not the first thing you reach for, because when the first big move a party makes is towards impeachment, it’s very difficult for the American people to conclude that it is anything but a partisan issue.”