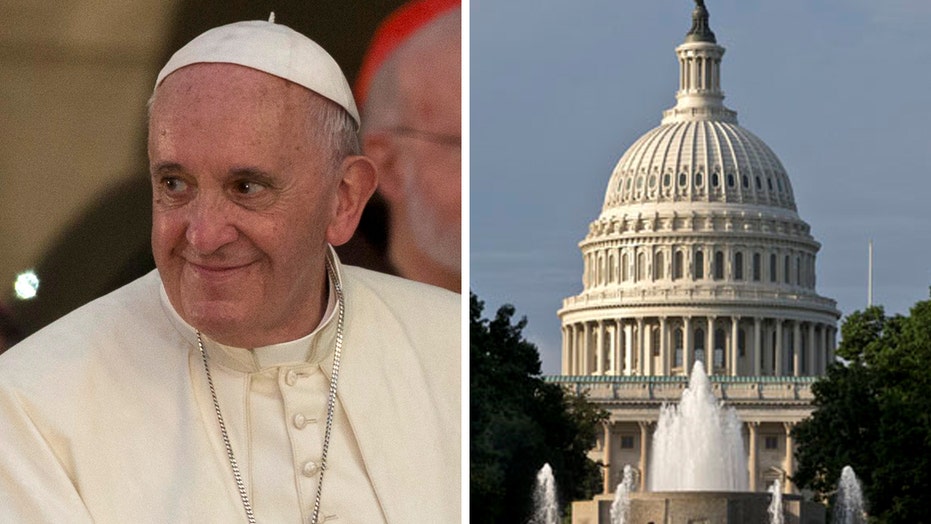 Lawmakers and staff told not to crowd the aisles when the Pope enters, no handshaking or chatting

Congressional lawmakers are being reminded to stay on their best behavior when Pope Francis addresses a Joint Meeting of Congress on Thursday -- and most importantly, to please refrain from touching His Holiness.

The four top congressional leaders sent out a letter to members last week asking them to refrain from "handshakes and conversations" with Pope Francis and other dignitaries as they walk down the center aisle before the address.

In an additional -- and highly unusual -- precaution, each party reportedly is putting together a team of trusted lawmakers to block colleagues who may try and break the rules anyway.

Roll Call reports that the leadership is seeking about 50 members, to fill the three chairs on each side of the aisle where lawmakers are assigned to sit.

Their job: ensure their colleagues do not try to rush up to the pope to kiss his ring, touch his clothing or otherwise snag a photo op.

The concerns may be well-founded. When President Obama delivers a State of the Union address, certain lawmakers are notorious for jockeying for position to get a handshake and photo op -- maybe a quick chat -- on the president's way to the podium. With Pope Francis in the room for a first-ever papal address to Congress, the potential certainly exists for an unbefitting scene to break out in the aisles.

Mindful of this, House Speaker John Boehner; Senate Majority Leader Mitch McConnell; Senate Minority Leader Harry Reid; and House Minority Leader Nancy Pelosi penned a letter to members last week reminding them that the event "will be seen around the world and by many of our constituents."

"Out of respect for the Pope's schedule and the expectation of a timely address, we respectfully request that you assist us by refraining from handshakes and conversations along and down the center aisle" during arrivals of the pope and others, they wrote.

The pope is expected to arrive in Washington, from Cuba, Tuesday afternoon. He will be greeted by President Obama, first lady Michelle Obama, Vice President Biden and Jill Biden.

The address to Congress is set for 10 a.m. ET on Thursday.