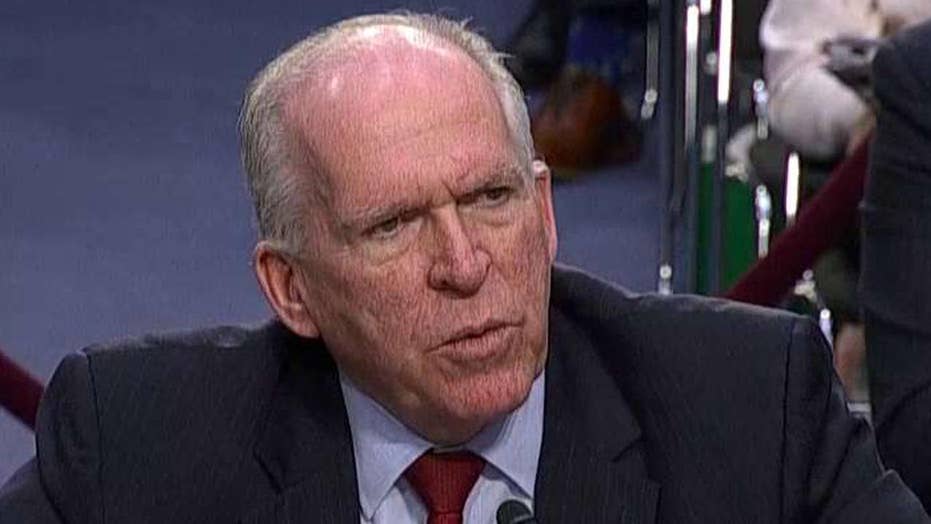 Citing a "high-level source," Republican Kentucky Sen. Rand Paul charged in a bombshell Twitter post late Wednesday that anti-Trump ex-CIA Director John Brennan "insisted that the unverified and fake Steele dossier" be included in a classified intelligence community report on Russian interference in the 2016 elections -- a decision that ultimately lent credibility to the dossier and may have played a key role in fomenting unfounded fears of Russia collusion for two years.

Paul called on Brennan to testify under oath immediately, as Republicans continue to aggressively seek out the origins of the collusion narrative. Fox News had not independently verified Paul's source, and Brennan has not replied to Fox News' requests for comment.

Fox News is told Paul's tweet specifically accused Brennan of pushing to incorporate the dossier into the January 2017 official intelligence community assessment (ICA) from the FBI, CIA, and NSA that Russia worked to interfere in the 2016 election.

However, the dossier is not referenced in the unclassified summary of the ICA report that has been publicly released. Former Director of National Intelligence (DNI) James Clapper previously testified that the dossier was not ultimately used in the ICA at all.

CNN reported on Jan. 12, 2017, based on anonymous sources, that intelligence officials briefed Trump on Jan. 6, 2017 with a "synopsis" of the contents of the dossier, which was written by ex-British spy Christopher Steele. Among the claims in the discredited dossier were that the Russian government had humiliating and compromising information concerning Trump.

Although the decision to brief Trump on the dossier and the intelligence community's reliance on it, then-FBI Direct James Comey would later testify, was ostensibly intended to make Trump aware of potential blackmail risks, the unexplained and nearly immediate leak of the meeting legitimized the dossier's significance and prompted a cascade of unfounded media-driven theories about what purportedly compromising information the Russian government may have on the president.

For example, Vanity Fair article alleged: "The fact that the nation’s top intelligence officials chose to present a summary version of the dossier to both President Obama and President-elect Trump, as CNN reports they did last week, indicates that they may have had a relatively high degree of confidence that at least some of the claims therein were credible, or at least worth investigating further."

"BREAKING: A high-level source tells me it was Brennan who insisted that the unverified and fake Steele dossier be included in the Intelligence Report," Paul wrote on Twitter on Wednesday. "Brennan should be asked to testify under oath in Congress ASAP."

Information from the author of the discredited dossier was also used in October 2016 to support a Foreign Intelligence Surveillance Act (FISA) warrant to surveil then-Trump aide Carter Page.

Just nine days before the FBI applied for the warrant to monitor Page, bureau officials were battling with a senior Justice Department official who had "continued concerns" about the "possible bias" of a source pivotal to the application, according to internal text messages obtained last week by Fox News. (Sources tell Fox News the DOJ stonewalled congressional investigators by not releasing those text messages last year.)

Fox News is told the texts were connected to the ultimately successful Page application, which relied in part on information from Steele. In its warrant application, the FBI incorrectly assured the FISA court on numerous occasions that other sources independently corroborated Steele's claims but did not clearly state that Steele worked for a firm hired by Hillary Clinton's campaign.

Former CIA officer John Kiriakou reacts to the ex-CIA director's remarks about Trump prior to the release of the Mueller report.

WHY BRENNAN, CLAPPER'S HIGH-LEVEL MEETING -- REVEALED BY TEXTS OBTAINED BY FOX NEWS -- WAS SO UNUSUAL

In a Dec. 12, 2016, text reviewed by Fox News, Page wrote to McCabe: "Btw, [Director of National Intelligence James] Clapper told Pete that he was meeting with [CIA Director John] Brennan and Cohen for dinner tonight. Just FYSA [for your situational awareness]."

Brennan was one of the loudest and most virulent voices to trumpet the Russian collusion theory over the past two years, asserting falsely just weeks ago that Special Counsel Robert Mueller was likely planning to indict members of the Trump administration's family in a scene reminiscent of the "ides of March” and the assassination of Julius Caesar.

Paul had supported the White House's decision to revoke Brennan's security clearance last year. Trump administration officials said Brennan was implying improperly that he had insider information to bolster his outlandish accusations. In the same interview in which he told MSNBC that an "ides of March" redux may soon materialize, MSNBC host Lawrence O'Donnell even remarked at one point, "You have the inside knowledge." Brennan attempted to dismiss that suggestion.

After the news that Mueller found no evidence of Trump-Russia collusion after an exhaustive probe lasting nearly two years, Brennan offered a meek mea culpa.

He added: “I am relieved that it’s been determined there was not a criminal conspiracy with the Russian government over our election."

Brennan said he was “not all that surprised that the high bar of criminal conspiracy was not met" -- although, according to Attorney General William Barr, Mueller in fact found no evidence of such a conspiracy whatsoever.