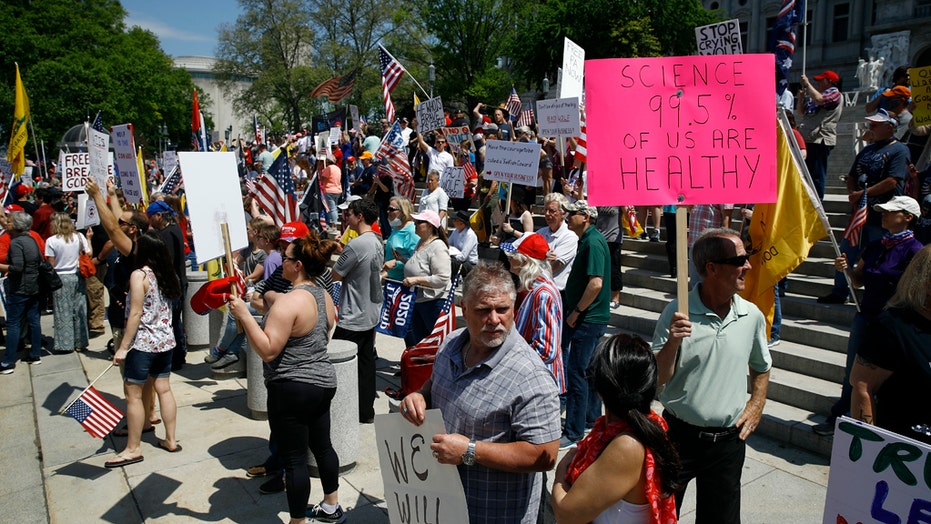 Hundreds of Pennsylvanians gathered around the state's Capitol in Harrisburg on Friday to protest coronavirus-related restrictions 70 days after they were first implemented, criticizing Democratic Gov. Tom Wolf for what they said was an overbearing approach to handling the pandemic.

"It's time for the governor to give up the power," an organizer with a megaphone said to loud applause, recorded on a Facebook live stream from a Fox 43 reporter. He criticized Wolf for "making decisions by fiat" and "forcing nursing homes to accept COVID patients."

The rally was put on by ReOpen PA, a group that was involved in organizing a previous rally in Harrisburg and is associated with a handful of conservative activists who have been behind several such rallies across the country.

“This is now a state where one man is calling the shots and not abiding by the Constitution of the state or the country," spokesperson Matt Bellis said in a press release for the event. "The Governor is using laws for mobilizing aid for disaster areas during a time of emergency. These laws are meant for just a short time, but are now being used to disable resources, businesses, and people to lock them down."

Protesters demonstrate during a rally against Pennsylvania's coronavirus stay-at-home order at the state Capitol in Harrisburg, Pa., Friday, May 15, 2020. (AP Photo/Matt Rourke)

Rep. Russ Diamond, a Republican, listed a variety of elements of Wolf's coronavirus response that he and the crowd called a "complete utter failure."

"A byzantine business classification list that nobody can make heads or tails out of," Diamond said.

"Twenty-two million people out of work and not repairing the unemployment system to handle it," Feingold continued.

Protesters demonstrate during a rally against Pennsylvania's coronavirus stay-at-home order at the state Capitol in Harrisburg, Pa., Friday, May 15, 2020. (AP Photo/Matt Rourke)

This is not the first time demonstrators have descended on the Pennsylvania capital railing against coronavirus restrictions. Hundreds lined the street of Harrisburg on April 20 in a similar rally, featuring Gadsden flags, Trump flags, plenty of signs and very little social distancing. USA chants were popular at both rallies.

Pennsylvania, like many other states, has begun easing its coronavirus shutdown order, moving to slowly reopen some areas of the state that have not been as hard hit by the coronavirus. But Wolf has had to deal with not just unruly protesters, but also unruly county governments, some of which have been moving to reopen faster than they are authorized to by the state government.

To counter that, Wolf lashed out at local lawmakers on Monday, saying that he would withhold funding from governments that disregard the state's reopening plan.

Protests against state stay-at-home orders have swept many state capitals, including Ohio, North Carolina, Michigan and more. Wisconsin was the first state to have its stay-at-home order dealt a major blow, with the state's supreme court striking down Gov. Tony Evers' order on Wednesday.