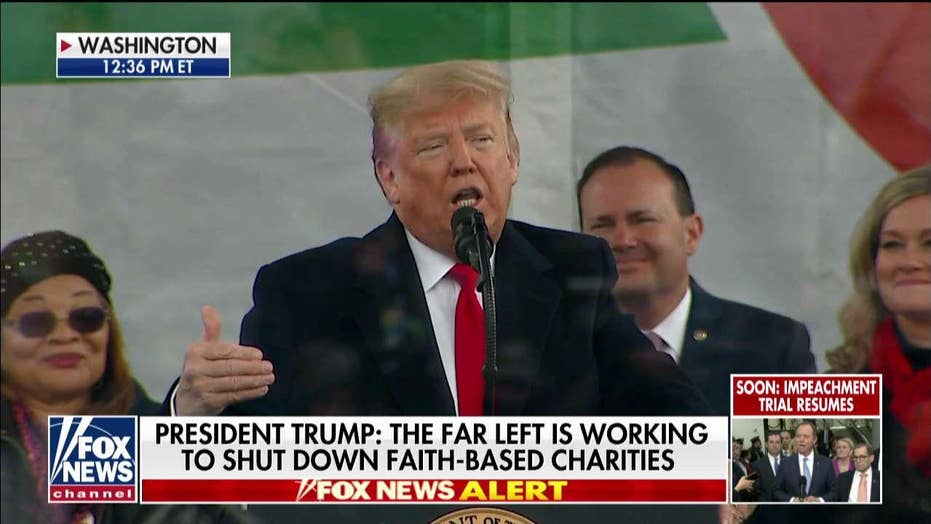 Women like Kristen Day, who leads Democrats for Life, have been put in a difficult position.

Amid the "MAGA" hats and "Keep abortion legal" signs in front of the Supreme Court on Friday, there was a handful of women such as Day -- who seemed not to fit in either category.

On Friday, her group attended America's largest annual pro-life gathering, where a man reviled by her party made history in how he lent support to the cause she fought for most passionately. Moreover, he did so during a March for Life that positioned itself as pro-woman -- an apparent irony for Democrats given their tendency to see President Trump, the keynote, as an icon of contemporary "attacks" on women.

"Trump is well-known for his misogynistic statements and actions," Terrisa Bukovinac, a pro-life Democrat, told Fox News on Friday. When asked whether she saw any irony in his appearance at the event, she said "definitely."

In order to support Trump, women like Bukovinac have to overcome their apparent aversion to him as a person, as well as to the non-abortion policies touted by the Republican Party.

"While it was historic to have a U.S. president address the March for Life, I do have concerns about its impact," Day told Fox News. "The March for Life has made some inroads to pro-life Democrats and making the March inclusive to all. The pro-life movement, to be successful, MUST be bipartisan."

Republicans can take hope, however, in the appreciation pro-life Democrats might have for leaders such as the president.

"I think it’s an important move for all of our elected officials to support the March for Life," Bukovinac said when asked about Trump's decision to speak at the march. While she would have preferred a pro-life Democrat to champion her cause, she indicated that her own party made it unlikely.

"Until the 72 percent of Dems who want to see abortion restricted stop voting for pro-abortion extremists, we will continue to have to rely on right-wing leadership to draw attention to our cause," she said.

"I don't know how much I heard, to be honest," she said. "I was worried that he said something that I might not have agreed with but I'd have to go look at it. But he's a sitting president and he's right on this issue, and we need everybody on this issue."

Terrisa Bukovinac is the executive director of Pro-Life San Francisco.

When asked about the historic nature of Trump's speech, French added: "If that's what he believes in, that's great. We need everybody to be pro-life in this country -- and really, the Republicans have been doing the heavy lifting for pro-life Democrats. Pro-life Democrats have been squished out of our party. So, we're relying on Republicans to carry this forward."

Her comments came as the Democratic presidential field took a far swing to left on the issue -- opposing, for example, the Hyde Amendment, a decades-old, bipartisan prohibition on taxpayer funding for most abortions.

Some, like Progressive Caucus Co-Chair Pramila Jayapal, D-Wa., have indicated that French's favored politicians -- Rep. Dan Lipinski, D-Ill., and Louisiana Gov. Ron Bell Edwards -- shouldn't be in the party. Pro-life Democrats like them should face "strong primary challenges," Jayapal had said in May.

At a fundraiser on Thursday, Lipinski indicated he faced a tough reelection bid. Both his opposition to abortion and his support for President Trump's impeachment set him up for opposition with a wide swath of the electorate.

Jeannie French, 59, of Pittsburgh holds a Democrats for Life sign outside of the Supreme Court on Friday, Jan. 24.

Lipinski also encountered opposition from a pro-choice candidate who has supported by Rep. Alexandria Ocasio-Cortez, D-N.Y., and Planned Parenthood.

"Planned Parenthood really wants to target and silence pro-life Democrats who make up a third of the party," Day told Fox News. "They bully and target pro-life Democrats into silence instead of dialogue. They do not represent Democratic principles that call for diversity and inclusion."

Compared to party leaders, Democratic voters appeared considerably more open to restrictions on abortion. According to a Marist poll released Wednesday, 44 percent of Democrats said they were "more likely to vote for" candidates who would limit abortion to the first trimester.

That stands in stark contrast to Democratic leaders' positions, which Trump and other pro-life advocates warn would allow abortion up until the point of birth. It could be problematic for elected Democrats if that trend continues.

Patty Decker, 59, told Fox News that she previously didn't identify with a particular political party, but leaned more toward Republicans because of the life issue.

"I think it's very sad," she said of Democrats' evolution on the issue, adding: "It's disappointing to me. I know Democrats used to be a kind of, you know, 'you believe this, I believe that,' but now it's this angry, bitter, divisive issue."

Kristin Vail, 26, holding a Democrats for Life sign outside of the Supreme Court at the 2020 March for Life

Nonetheless, Democratic women told Fox News they wouldn't support Trump's reelection, despite him being the most likely pro-life champion in the 2020 presidential race.

When asked whether there was anything Trump could do to get her vote, pro-life Democrat Kristin Vail said: "No, because I'm a Democrat." After Trump's speech, French seemed more open to him than Vail did. Her chosen candidate on Friday, however, was a candidate with a Christian, democratic third party. She said she "can't say right now" whether or not she might vote for Trump in 2020.

Bukovinac told Fox News that she would support Trump if he "apologize[d] for all the horrible things he’s said and done and begin to make amends." For French, she would need Trump to "do more for immigrants" and support raising the minimum wage.

"I think we have to understand that there are things that push us toward abortion," she said, before referencing cuts to social programs.