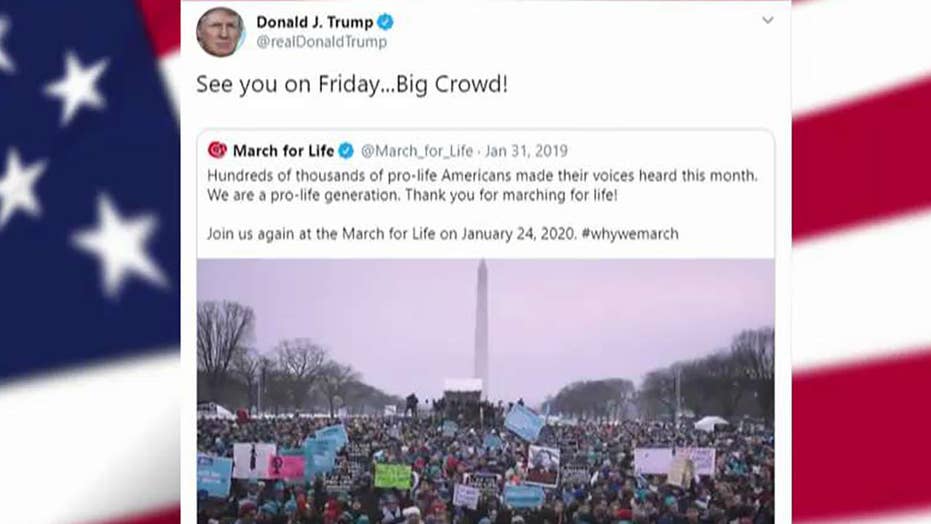 Trump set to make history as first president to attend, speak at March for Life

Republican Senate candidate Elisa Martinez, who will also be speaking at the pro-life rally, praises the president's decision and discusses her campaign in New Mexico.

EXCLUSIVE: President Trump's campaign will unveil a new pro-life coalition on Friday as part of its effort to drive pro-life voters to the polls in 2020, Fox News has learned.

The "Pro-Life Voices for Trump" coalition will be led by Susan B. Anthony List president Marjorie Dannenfelser, who previously criticized Trump but came to praise his administration's achievements on the issue.

Separately, Fox News has learned that a long list of senators will back the pro-life cause in videos that will air at the March for Life on Friday. One of the videos features women like Sen. Joni Ernst, R-Iowa, endorsing the March's theme, "pro-life is pro-woman."

The march is expected to draw a crowd of at least 100,000 in the nation's capital as Republicans like Trump pursue an ambitious pro-life agenda. While Trump has faced substantial roadblocks in Congress, pro-life leaders have praised him for using his executive authority to nominate conservative justices and restrict funding for Planned Parenthood.

A Trump campaign video for the march highlights Trump's hard line on the issue and adamantly denouncing Democrats for favoring taxpayer funding for the procedure. "We will always defend the very first right in the Declaration of Independence, and that is the right to life," he says in the video.

Then-candidate Trump initially provoked pro-life activists' concerns given his previous comments on the issue. Now, according to the campaign, his new coalition includes major figures in the movement: Fr. Frank Pavone of Priests for Life, Kristan Hawkins of Students for Life of America and others.

On the anniversary of that decision, Trump appeared to flout that legacy by declaring it the National Sanctity of Human Life Day. "Today, I call on the Congress to join me in protecting and defending the dignity of every human life, including those not yet born," Trump said in a proclamation Wednesday.

Friday's speech will take place as both sides of the abortion debate prepare to pour vast sums of money and resources into the 2020 elections.

Last week, Planned Parenthood rolled out its most expensive electoral effort to date, warning about an unprecedented attack from Republicans. The operation will include everything from grassroots organizing and building its volunteer base to polling and paid advertisements. Several pro-life organizations will be spending millions of dollars -- $52 million from Dannenfelser's group -- on the election as well.

In addition to SBA List, groups like Concerned Women for America (CWA) and Heritage Action are similarly planning nationwide efforts to galvanize voters towards pro-life victories.

CWA President Penny Young Nance told Fox News on Friday that her group is readying a $1 million effort that includes digital and radio ads in addition to earned media. That number will likely grow as the group plans to continue raising money over the year.

The focus will be on "more local activities," she said, noting that her organization would hold a bus tour rallying conservative women before the election.