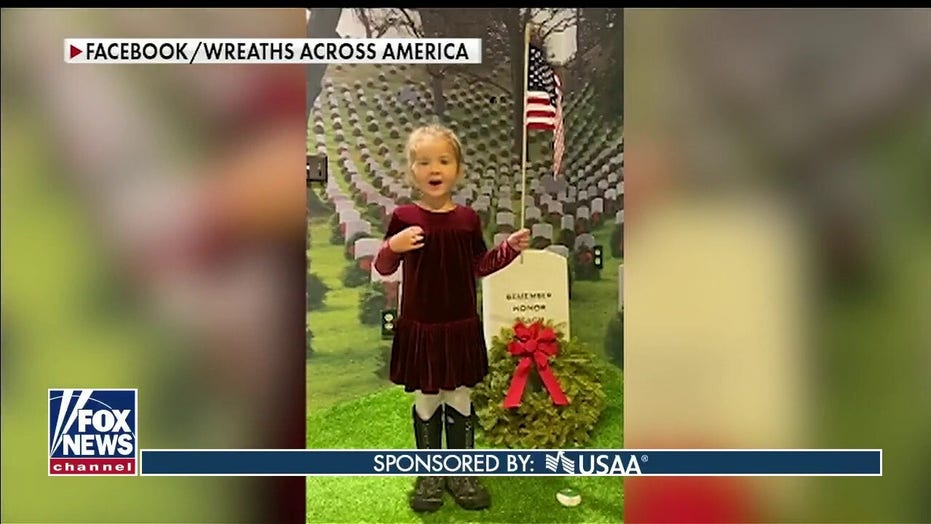 At a largely empty World War II Memorial in Washington D.C., President Trump on Friday participated in a wreath-laying ceremony commemorating VE Day, the anniversary of the Nazis' surrender and the end of the war in Europe.

Trump's participation in the ceremony came after a handful of veterans were allowed to take photos in front of the memorial where the president would pay his respects and as the coronavirus pandemic -- which Trump calls the "invisible enemy" -- continues to roil the United States and the world.

The president did not make any remarks in his Friday appearance.

"We have done this for generations in honoring our dead," retired Gen. Jack Keane said on Fox News' "America's Newsroom" as the ceremony was ongoing. "This is a remarkable moment for America. We have always made this commitment. We have never ever forgotten to honor those who sacrificed to help this country be the great country that it is."

The event with Trump was in stark contrast to the original VE Day celebration in 1945, when thousands of Americans crowded into the streets, particularly in New York City, to celebrate the end of the war in Europe. But it was similar to other VE Day celebrations around the world that involved precautions against the coronavirus.

In the United Kingdom, many are dressing up in 1940s attire, while bunting has been displayed outside homes, including at 10 Downing Street in London that houses the prime minister's office. People are also being encouraged to go out onto their doorsteps to sing Dame Vera Lynn's iconic wartime anthem, “We'll Meet Again” — which has added resonance now as families and friends are separated by coronavirus lockdowns.

In France, small ceremonies were allowed at local memorials as the government granted an exception to restrictions following requests from mayors and veterans.

President Emmanuel Macron led a small ceremony at the Arc de Triomphe. He laid a wreath and relit the flame of the Tomb of the Unknown Soldier, atop a deserted Champs-Elysees Avenue in Paris.

The U.S. ceremony at the World War II Memorial in Washington, D.C. opened with Trump, first lady Melania at his side, saluting in front of a wreath as "Taps" played. He then, keeping social distance, greeted the World War II veterans who were in attendance at the ceremony, standing by their chairs, which were spaced six feet apart.

President Donald Trump and first lady Melania Trump participate in a ceremony at the World War II Memorial to commemorate the 75th anniversary of Victory in Europe Day, Friday, May 8, 2020, in Washington. (AP Photo/Evan Vucci)

The president and the first lady then made their way over to the northern walls of the memorial, where they conversed with a man appearing to be a National Parks Ranger. Trump saluted in front of a fountain that listed off the European theatres of the war.

"We are determined that before the sun sets on this terrible struggle our flag will be recognized throughout the world as a symbol of freedom on the one hand and of overwhelming force on the other," an inscription on the fountain read, quoting Gen. George C. Marshall.

Trump then made his way to the Freedom Wall, which is speckled with 4000 gold stars to represent the approximately 400,000 Americans who died in World War II. He and Melania stood there for a moment before making their way back to "The Beast," the president's limo, and driving off.