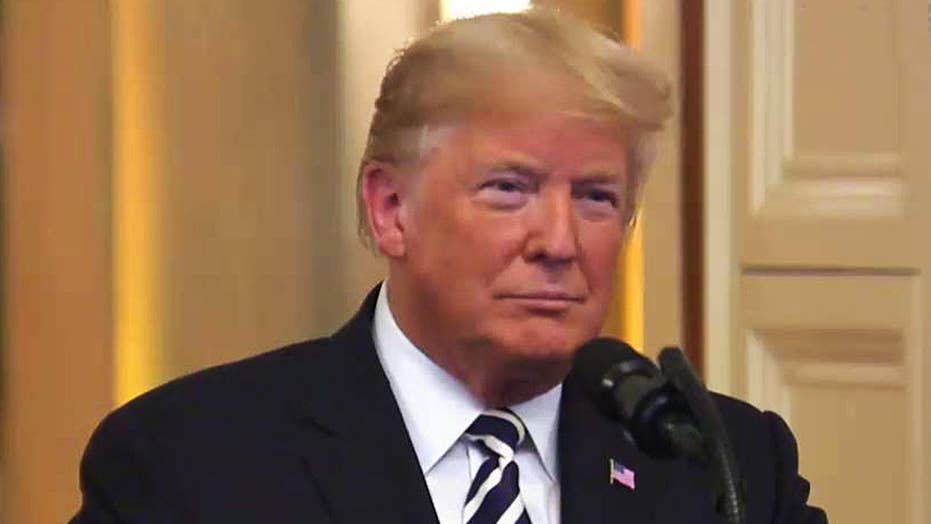 Speaking at a swearing-in ceremony for Associate Supreme Court Justice Brett Kavanaugh in the East Room of the White House Monday evening, President Trump apologized to Kavanaugh and his family "on behalf of our nation" for what he called a desperate Democrat-led campaign of "lies and deception" intent on derailing his confirmation.

"On behalf of our nation, I want to apologize to Brett and the entire Kavanaugh family for the terrible pain and suffering you have been forced to endure," Trump began. "Those who step forward to serve our country deserve a fair and dignified evaluation, not a campaign of political and personal destruction based on lies and deception. What happened to the Kavanaugh family violates every notion of fairness, decency, and due process. In our country, a man or a woman must always be presumed innocent unless and until proven guilty."

Trump added that "under historic scrutiny," Kavanaugh had been "proven innocent." A series of uncorroborated and disputed sexual misconduct allegations had threatened to upend Kavanaugh's confirmation, and some top Democrats have floated further investigations and even possibly impeaching Kavanaugh.

To sustained, raucous applause, Trump entered the event Monday night flanked by Kavanaugh and former Associate Justice Anthony Kennedy, who hired Kavanaugh as a law clerk from 1993 to 1994. All sitting Supreme Court justices were in attendance, as well as Kavanaugh's parents, wife, and two daughters.

"You, sir, under historic scrutiny, were proven innocent."

Trump thanked top Republicans for spearheading Kavanaugh's confirmation, and particularly praised Maine Republican Sen. Susan Collins. Kavanaugh's elevation to the Supreme Court appeared certain only after Collins delivered a dramatic, point-by-point explanation of her vote for Kavanaugh in a floor speech on Friday afternoon. "We are indebted to Susan Collins for her brave and eloquent speech," Trump said.

The president also led a standing ovation for Senate Majority Leader Mitch McConnell, R-Ky., whom he called a "great" leader who has done an "incredible job for the American people." Under McConnell, Republicans have now confirmed 26 federal appellate judges and two Supreme Court justices. (Kavanaugh's rise to the Supreme Court creates a new vacancy on the influential D.C. Circuit Court of Appeals, where he had served for 12 years.)

At the conclusion of Trump's remarks, Kennedy administered the oath to Kavanaugh as his family looked on, and the room again broke out into sustained applause. As Trump noted, it was the first time a Supreme Court justice has ever sworn in his former clerk to take his seat.

Taking the podium as the Supreme Court's newest justice, Kavanaugh acknowledged the partisan rancor that surrounded his confirmation and gripped the nation over the past two months. "I take this office with gratitude and no bitterness," he said.

At times emotional, Kavanaugh praised his "amazing" and "fearless" friends for standing by him, and said that his focus now is "to be the best justice I can be."

"My goal is to be a great justice, for all Americans, and for all of America," Kavanaugh said. "I will work very hard to achieve that goal. I was not appointed to serve one party or one interest, but one nation."

He vowed to continue to "coach, teach, and tutor" -- a notable promise, given that student backlash at Harvard Law School last week prompted Kavanaugh to withdraw from teaching a planned course there.

"I take this office with gratitude and no bitterness."

"I am an optimist. I live on the sunrise side of the mountain," Kavanaugh said, echoing a line from his fiery testimony last month before the Senate Judiciary Committee. "I see the day that is coming, not the day that has gone."

The Monday evening oath was entirely ceremonial. Kavanaugh took his official oaths in a private ceremony at the Supreme Court on Saturday, shortly after the Senate voted to confirm him by a narrow 50-48 margin.

The event, a high-spirited flourish after a historically bitter and partisan confirmation battle, was a nationally televised opportunity for Kavanaugh to speak directly to the nation that is increasingly divided along partisan lines. Fox News polls show that GOP enthusiasm is up across the board in the wake of the Kavanaugh showdown, even though political headwinds normally work against the party of incumbent presidents in their first midterm elections.

Kavanaugh, along with his law clerks, has been at the Supreme Court preparing for his first day on the bench Tuesday. The high court is set to hear arguments in two cases about longer prison terms for repeat offenders. (Kavanaugh's four clerks all are women, the first time that has happened.)

However, the upcoming Supreme Court term is "fairly benign when it comes to hot-button issues," Adam Feldman, a Supreme Court expert who runs the blog Empirical SCOTUS, told Fox News. "This makes me think that the justices were aware of [Justice Anthony] Kennedy's likely departure when they starting granting cases for this term."

VICE PRESIDENT PENCE FACES PROTESTERS INSTEAD OF USING SIDE EXIT AT CAPITOL, TELLS SECURITY DETAIL, 'LET'S DO IT'

The new justice was "caught up in a hoax that was set up by the Democrats," Trump said as he left the White House earlier Monday for a quick trip to Florida. "It was all made up, it was fabricated and it's a disgrace."

The climactic 50-48 roll call vote Saturday on Kavanaugh was the closest vote to confirm a justice since 1881.

But then, Collins said, "When [Kavanaugh] came back with a forceful denial, the anger and anguish he showed, and then the lack of corroboration, led me back to the fundamental issues to our legal system."

On Sunday, Collins criticized opponents' efforts to fundraise against her vote, calling them nothing more than blatant ploys to buy votes in a future election.

“They are asking me to perform an official act and if I do not do what they want, $2 million plus is going to go to my opponent. I think that if our politics has come to the point where people are trying to buy votes and buy positions, then we are in a very sad place,” Collins told CBS News' "60 Minutes."

Ultimately, every Democrat voted against Kavanaugh except for Sen. Joe Manchin of West Virginia, a deeply red state where Kavanaugh remains highly popular. Manchin is up for re-election this year.

McConnell on Sunday praised his fellow GOP senators, who he said re-established the "presumption of innocence" in confirmation hearings.