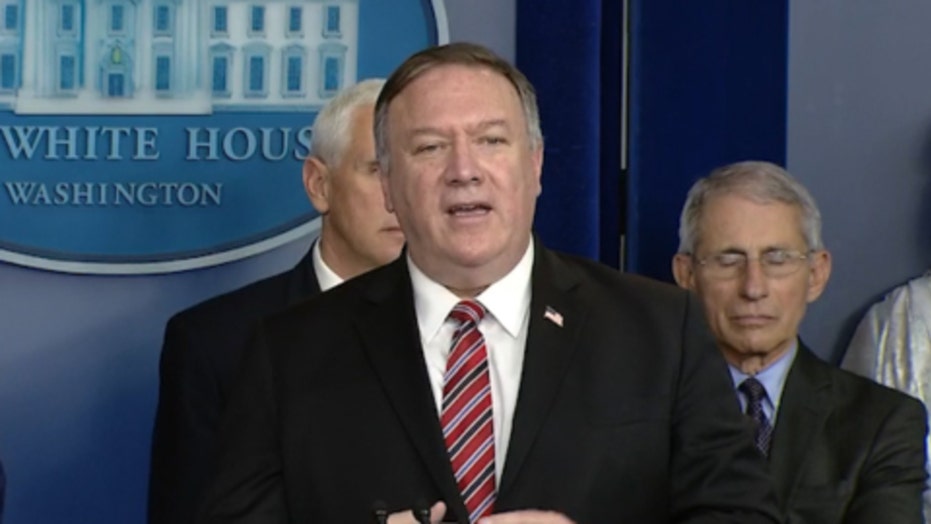 Sec. Pompeo urges Americans to be wary of disparaging disinformation

Mike Pompeo speaks about the fight against disinformation coming out of places like China, Russia and Iran to disparage American activity

Secretary of State Mike Pompeo blamed China, Russia and Iran for spreading disinformation about the coronavirus in a White House coronavirus task force briefing Friday as he asked Americans to make sure they are getting their information from reputable sources.

The comments from Pompeo are a continuation of what has been a tough stance from the secretary of state as the Trump administration has gone back-and-forth with China on who is to blame for the virus' spread. Trump has called the coronavirus the "Chinese virus" repeatedly, including Friday, referencing the disease's origins in Wuhan, China. That has drawn objections from both China itself and some left-leaning Americans who claim the terminology is racist.

"It's pretty diffused, unfortunately," Pompeo said of where the false information is coming from. "But we've certainly seen it come from places like China and Russia and Iran, where there are coordinated efforts to disparage what America is doing and our activity to do all the things President Trump has set in motion here."

Earlier in the press conference, Pompeo implored Americans to seek information from dependable outlets, citing a falsehood peddled by China that the coronavirus originated with the U.S. military.

Later in the briefing, Pompeo continued: "We've made clear we've spoken to these countries directly that they need to knock it off, that we don't approve of it."

President Trump also addressed China's role in the outbreak during the task force briefing: As a reporter began asking Trump about what he has been calling the coronavirus -- the "Chinese virus" -- Trump interrupted her and went out of his way to praise Chinese President Xi Jinping.

Trump has largely refrained from criticizing Xi directly both during the coronavirus pandemic and throughout his presidency, but Trump has gone out of his way to refer to the coronavirus as the "Chinese Virus" in recent days as American officials, including members of his administration, have taken a tough stance against China on its apparent propaganda campaign to distract from the fact that its lack of transparency in the early stages of the outbreak significantly contributed to the virus' worldwide spread.

On Monday, Pompeo called on People’s Republic of China Politburo member Yang Jiechi to push back on a tweet from the deputy director-general for the Chinese Foreign Ministry's Information Department. The deputy director-general, Lijian Zhao, tweeted that the United States military might be responsible for the coronavirus. He provided no evidence to that effect.

Additionally, several GOP lawmakers and officials, including Pompeo, have referred to the coronavirus as the "Wuhan virus" or the "Chinese coronavirus." Meanwhile, multiple members of Congress -- from both parties -- have introduced bills seeking to reduce Ameican dependence on Chinese medical supplies.

"The Chinese Communist Party threatened to cut off America’s access to vital drugs in the midst of a pandemic caused by its own failures," Sen. Tom Cotton, R-Ark., said in a statement announcing his version of a bill to move more of America's medical supply chain stateside. "It’s time to pull America’s supply chains for life-saving medicine out of China and make the CCP pay for contributing to this global emergency.