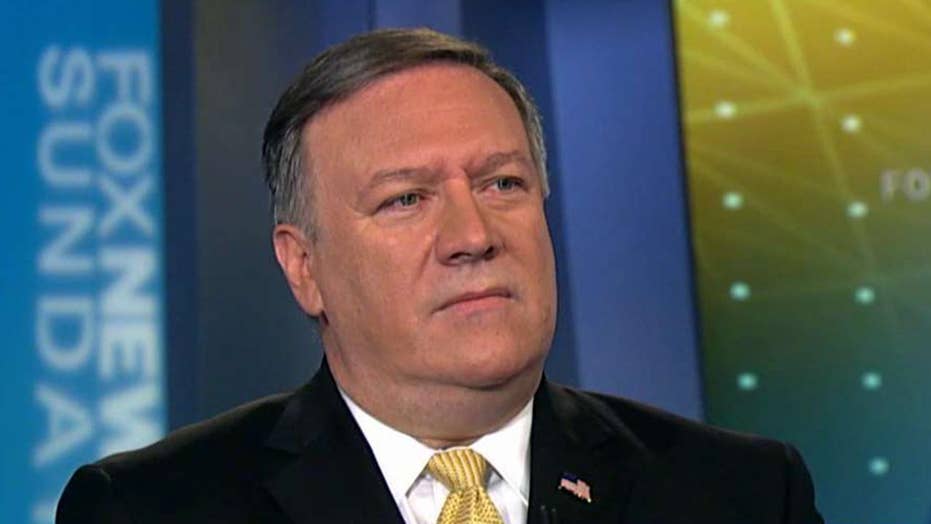 'Fox News Sunday' exclusive: Secretary of state on the release of three American detainees from North Korea and President Trump's strategy for Iran.

Secretary of State Mike Pompeo made clear Sunday that President Trump’s decision to exit the Iran nuclear deal didn’t target Europe, but he backed the president’s vow to keep European allies or companies from helping Iran pursue a nuclear weapon.

“The withdrawal wasn’t aimed at the Europeans,” Pompeo told “Fox News Sunday.” But “the sanctions that are in place are very clear.”

Trump said last week that the United States is withdrawing from the 2015 international Iran nuclear deal and will re-impose sanctions on the rogue nation. And he said that he will consider “economic sanctions of the highest level” on any European company or country that helps in Iran’s nuclear “quest.”

Iran and the other five nations in the deal, brokered by the former Obama administration, remain in the agreement, in which Iran agrees to wind down its development of a nuclear weapon in exchange for the lifting of billions in economic sanctions.

Western allies in the deal -- including France and Britain -- urged Trump to remain in the deal and have suggested that such companies will continue to do business with Iran.

Pompeo said Sunday that he worked for “days and weeks” with European allies to salvage the Iran deal and that he will continue to try to seek a better one, amid concerns that Iran has not fulfilled its side if the bargain.

“My mission from President Trump is to work to strike a deal that achieves the outcomes that protect America,” he said.

Pompeo, the country’s top diplomat, said that arguments about Iran being more emboldened by Trump’s withdrawal are “ludicrous.”

“That's ludicrous to suggest Iran feels less constraint,” he said. “They fired missiles into where Americans travel each day, fired missiles into Israel. I would argue they felt they could act with immunity” under the deal. “Iran must explain how it continues its march across the Middle East.”