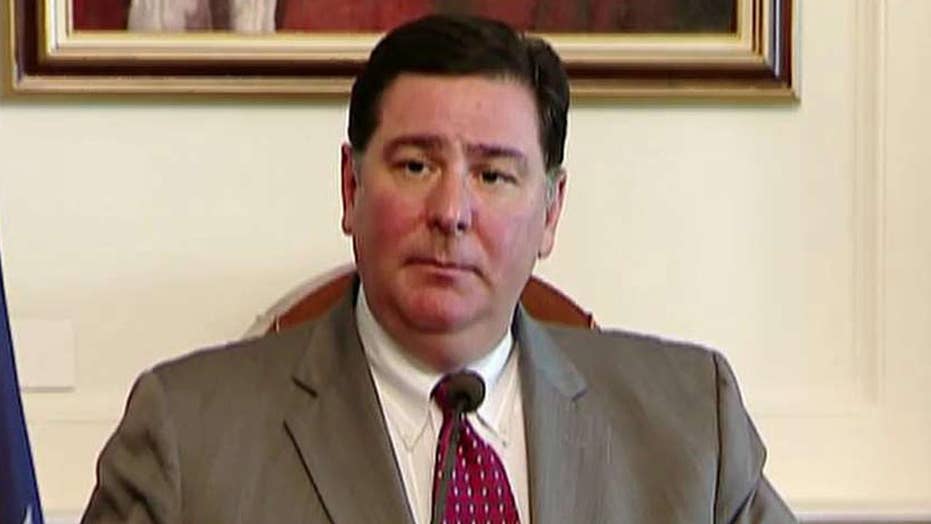 Pittsburgh's Democratic Mayor Bill Peduto signed an executive order on Friday promising the city will continue to comply with the Paris Climate Agreement, joining at least 91 other cities defying President Trump's decision to withdraw the U.S. from the global climate commitment.

Under the executive order, Pittsburgh will continue working toward clean energy climate objectives, including 100 percent renewable energy consumption for municipal operations by 2030. The Pittsburgh mayor on Thursday blasted the President's decision to abandon the Paris accord, stating "it will set us back decades."

The steel city became the focal point of the opposition to Trump's climate decision after the president said he backed out of the Paris deal because it was unfair to the U.S. "I was elected to represent the citizens of Pittsburgh, not Paris," was his signature line from the speech.

Peduto told the local Pittsburgh press he was "personally offended" by the Trump's speech. In part, he said, for evoking a dated image of Pittsburgh as an old city stuck in the 19th century, relying on steel and coal.

"During the 80s and 90s, we said our future economy may not be based on big manufacturing and we were able to turn the corner and build a new economy," Peduto said. "Pittsburgh is the poster child of showing why the Paris agreement is good economics for the United States."

After the collapse of the steel industry in the 80s Pittsburgh was forced to reinvent itself. Today, the city has turned into a tech hub -- Google, Amazon, Apple, and Uber have offices there. The city is now home to about 10,000 startup tech firms, according to the Pittsburgh Technology Council.

The shift in the economy is 30 years in the making. The largest private employer is no longer steel in Pittsburgh, it is is now the University of Pittsburgh Medical Center, with 65,000 employees. In fact, over the last 20 years, manufacturing jobs in the city have fallen 33 percent (82,900) while education and healthcare service jobs have risen 34 percent (248,600), according to the Bureau of labor statistics.

Pittsburgh's mayor has also said that President Trump does not represent the vast majority of voters in Pittsburgh. Citing the Pittsburgh Post-Gazette, Peduto is quick to point out that Democratic presidential candidate Hillary Clinton won 77 percent of the vote in Pittsburgh.

"Maybe he should have a speech writer that understands the difference between cities and regions and not just try to use cute iteration in order to make a point," the mayor said Thursday.

On a map, Pittsburgh is a blue liberal haven in an ocean of red conservative counties. Republicans and those in the fossil fuel industries point out while Allegheny County voted for Clinton, the state of Pennsylvania voted for Trump, including every other county in Western Pennsylvania.

In the 3rd district, just north of the city of Pittsburgh, Republican Rep. Mike Kelly supports Trump's decision to withdraw from the Paris Climate Accord.

"It would result in unfair domestic harm for American workers, taxpayers, consumers, manufacturers, and energy producers," Kelly said in a statement. "We would shoulder most of the cost and gain no measurable reward."

Communities in counties around Pittsburgh rely more on the fossil fuel energy industry than the city itself. The Pennsylvania Coal Alliance applauded the president for backing out of a deal "which put America’s competitiveness at risk and threatened energy independence and economic security."

Just 50 miles southeast of Pittsburgh, the president said he might attend the opening ceremony of a brand new coal mine in Acosta by Corsa Coal Corporation,  which would add 70 new jobs. The coal industry has lost 2,400 jobs in Pennsylvania since 2007, according to the Federal Reserve Bank of St.Louis. Only 4,800 jobs are left.

"We want a level playing field for all forms of energy, whether that's any sort of fossil fuels, coal, oil, natural gas or renewable or hydro," Corsa Coal Corporation CEO George Dethlefsen told Fox News. "And if we can get that, we think that coal can compete effectively."

Meantime, the natural gas industry in Pennsylvania says it is optimistic that Trump will figure out a deal that will be good for the environment and for natural gas. The industry has exploded in Pennsylvania since the discovery of the Marcellus Shale, and the advent of hydrofracking, quadrupling natural gas jobs since 2007 to over 20,000 in the state. Natural gas companies hope Trump will invest in infrastructure to make it easier to ship excess supplies of natural gas worldwide.

"I think if you take a look at what the president said in his speech, he commented about the fact that there may be a better deal for America," said David J. Spigelmyer, President of the Marcellus Shale Coalition. "We are going to turn the page and use American energy as our American advantage and our international advantage I think we have that opportunity today."