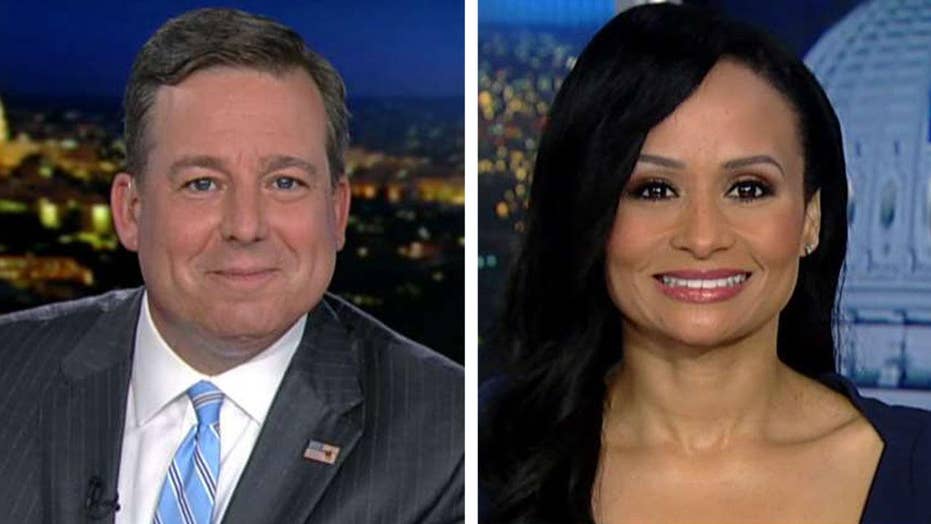 Katrina Pierson leveled the accusation on cable news shows after an audio recording raised questions about whether the Trump campaign knew of the president's alleged use of the N-word.

Pierson, who said in an interview that she signed a non-disclosure agreement with Trump, told "Fox News @ Night" that she was asked about a 2016 conference call where she could be heard saying, “No, he said it,” as though she was supporting Manigault Newman’s claim that Trump said the racial slur.

Pierson said she was merely placating Manigault Newman, who was carrying on because she “would not let this tape go.”

Manigault Newman’s claims surfaced while she promoted her new book, “Unhinged: An Insider’s Account of the Trump White House."

She claimed that she confirmed rumors of an old tape from “The Apprentice” in which Trump used the slur.

Manigault Newman told CBS that a person in California has allowed her to listen to the recording since writing the book. She said had she known, she would have left the White House “immediately."

Trump has denied ever using the word.

"I am trying to find at least what context it was used in to help us maybe try to figure out a way to spin it," Pierson said on the tape. Patton is then heard describing a conversation she had with Trump about his alleged use of the slur.

"I said, 'Well, sir, can you think of any time where this happened?' And he said, 'no,'" Patton is heard saying.

Manigault Newman responds: "Well, that is not true."

Pierson later says: "No, he said it. He is embarrassed by it."

She called Manigault Newman the epitome of annoying so she had to give in “to go about your day."

Trump took to Twitter, saying, the producer of “The Apprentice” called him to say there were “NO TAPES” of the show “where I used such a terrible and disgusting word as attributed by Wacky and Deranged Omarosa.”

Multiple former and current officials close to the president have denied her claims.

Pierson said Manigault Newman has been using the tape to manipulate the public.

She told CNN’s Erin Burnett that she “wouldn’t come on this program, as a black woman, Erin, and tell you that someone didn’t say a derogatory term when they did. I would just leave the campaign.”