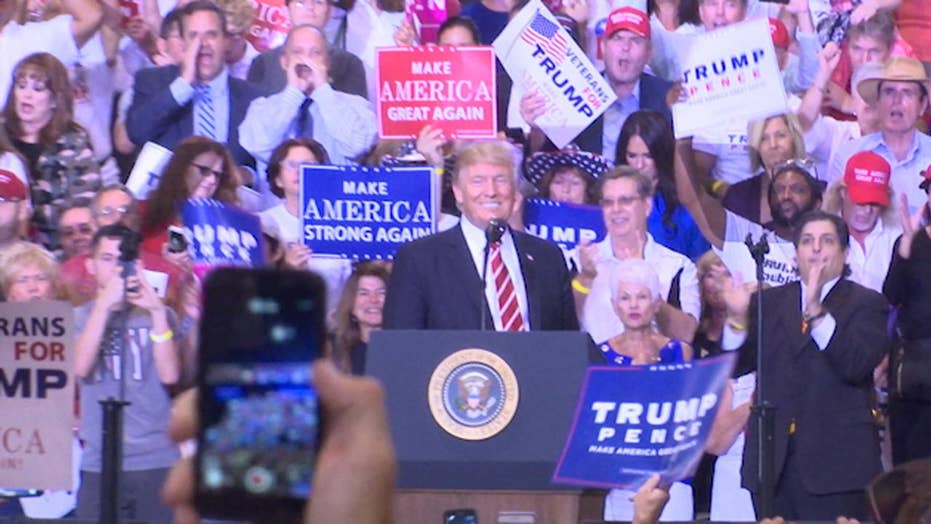 President Trump supporters—many of whom faced triple-digit heat to attend a Tuesday rally in Phoenix—appeared to approve the president’s speech and his job performance despite recent turmoil in his administration and his reaction to Charlottesville.

The rally inside the Phoenix Convention Center was raucous at times, and Trump appeared to approach the stage in a similar way in which he approached stages during his campaign.

He engaged the crowd—asking them if it was a good decision to run for president—and he used to platform to assail critics.

Trump devoted a lengthy portion of his speech to his response to the deadly Charlottesville protests. He appeared to veer off his prepared remarks and reiterated that he believed he got the correct message across the first time despite the media firestorm.

“I like the fact that he’s trying to unite the country instead of tearing it apart, I’m kind of disappointed that people fell he’s a racist and he’s prejudice, I really don’t believe he is and that’s one of the reasons why I voted for him”, says Erik Shaffer from Chandler, Arizona.

Another Trump supporter at the rally said: “We were looking at ourselves and what did he say that was so bad, we couldn’t quite figure it out, we were trying to figure out what the media was trying to say and it didn’t ring true whatsoever."

The speech was wide-ranging. Trump talked about ObamaCare and took aim at the two Arizona senators without naming them. Sens. John McCain and Jeff Flake appeared unpopular at the rally, especially after Trump yelled “one vote”—an apparent reference to McCain’s ‘no’ vote on the latest effort to repeal and replace the Affordable Care Act.

“I want McCain gone and I want Flake gone,” said one supporter at the rally. The man, who did not give his name, said he is a Kelli Ward supporter. Ward is likely the 2018 primary challenger against Flake.

Trump went on to talk foreign policy. He highlighted his primetime address on his Afghanistan timetable. It resonated with attendees of the rally, especially veterans.

“I like where he says we’re not gonna build a country but were gonna go in and if someone needs to be killed we’re gonna kill them.” Rick Cleveland, a veteran, said.

Many of his supporters admit that there are still many things they’d like to see get done including building the wall and tax reform, but hardly any of the blame of that fell on President Trump according to those Fox News spoke to.

“There’s a lot of things that I’d like to see done, but I think it’s the Congress’ fault who makes things so slow,” Roth Larsen, a Trump supporter, said. Her husband Ken said there are not a lot of conservative Republicans’ “supporting him.”