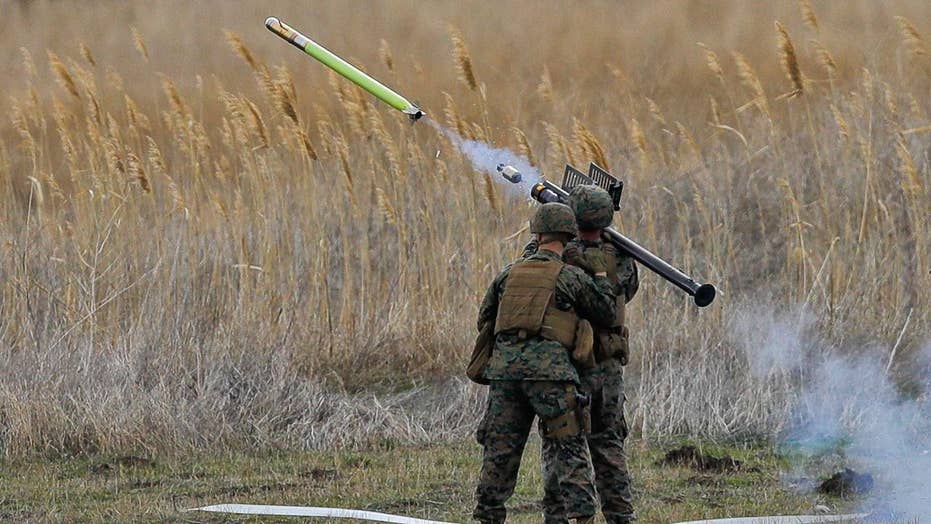 In a sign of growing concerns about Russia’s provocative military and rhetorical moves near NATO nations, the Swedish government held war “games” for the first time in 20 years.

The dramatic move comes as a NATO group conducted military maneuvers in Lithuania.

“We are all accomplished at very high intensity training, a NATO spokesman said to reporters. “And, we are prepared to deter [Russia] and defend Lithuania.”

Some U.S. experts say the feared attack or invasion by Russia is unlikely to happen, at least any time soon, but that suspicions toward Russia are understandable given its past invasions and hostile actions in the area.

“The events in Ukraine made them nervous,” Brian Taylor, a political science professor at Syracuse University and an expert on Russia and post-Soviet politics, told Fox News of Russia’s military incursion there in 2014. “All these countries are afraid, they’re sending a signal to Russia that they can provide their own security.”

“It would be extremely risky for Russia to attack,” Taylor said.

At the same time, Taylor added, Russia has defied expectations in the past.

“No expected Russia to militarily annex Crimea,” he noted.

Recently, the Swedish government announced that mandatory military service would resume next year, with an expected 4,000 people drafted, according to published news reports.

Swedish Defense Minister Peter Hultqvist referred to growing concern about Russia’s mounting aggression when he announced the draft and an increase in defense spending, according to the Times of London. The Times reported that Sweden also placed troops on the Baltic Sea island of Gotland.

Russia often has told Sweden and Finland not to join NATO. While those two nations remain outside the coalition, Lithuania joined NATO in 2004.

“We are in a context where Russia has annexed Crimea,” Hultqvist said, according to the Times. “They are doing more exercises in our immediate vicinity.”

Russia annexed Ukraine’s Crimea in 2014, prompting NATO to send troops to Lithuania and to Estonia, Latvia and Poland as a warning to Russia.

But Russia’s increasingly bold rhetoric and military exercises have even sparked discussions among NATO nations about forming their own European nuclear weapons deterrent program, one that would not rely on the United States. Those concerns have been exacerbated by President Donald Trump’s criticism of NATO, with many Europeans worrying that the region may not be able to count on the United States in case of an attack.

Last year NATO jet scrambled in response to Russian warplanes venturing close to NATO-member airspace 800 times, a huge jump from the 400 tallied in 2014 and 2015, VOAnews.com reported.

“We are protecting NATO airspace, NATO borders,” VOA News quoted a Netherlands Air Force spokesman as saying. “And, it is not necessarily just the Russians -- it’s any aircraft that does not comply with the rules that we have ... that apply in the air.”

Nonetheless, Taylor and some other experts in the U.S. see Russia as more of a nuisance for now than a genuine military threat.

“I wouldn’t say it’s a major issue to watch in terms of a military threat,” Taylor said of Russia attacking one of those countries that have been on alert recently. “People are more worried about Russia making a political move to interfere with elections and spread fake news to make one of those countries look bad.”

And there’s also concern, Taylor added, about Russia trying to stir up Russians living inside those states along the border.

“They worry that Russia would engage in low-level provocative actions, try to test NATO’s willingness to come to their defense.”