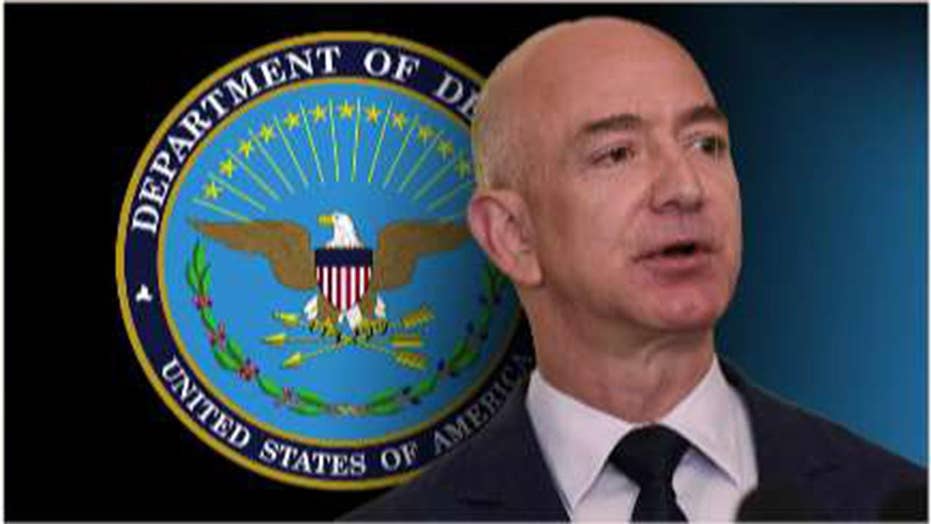 Swamp Watch: Amazon's shady dealings in lobbying and within the government

Steve discusses Jeff Bezos' pull and influence with lawmakers, and highlights the advantages that big tech uses to get their way.

Defense Secretary Mark Esper will review a massive $10 billion Pentagon contract that Amazon was in strong contention to receive -- weeks after President Trump said he may intervene.

A Pentagon spokesperson said Thursday that no decision will be made until the review is complete.

“Secretary Esper is committed to ensuring our warfighters have the best capabilities, including Artificial Intelligence, to remain the most lethal force in the world, while safeguarding taxpayer dollars," Pentagon spokeswoman Elissa Smith said in a statement. "Keeping his promise to Members of Congress and the American public, Secretary Esper is looking at the Joint Enterprise Defense Infrastructure (JEDI) program."

The Pentagon had previously said it plans to award the contract as soon as Aug. 23. It is not clear if the review will delay the process past that point.

The finalists for the cloud-computing contract -- known as the Joint Enterprise Defense Infrastructure (JEDI) -- are Amazon and Microsoft, but it has been dogged by allegations of conflict of interest in relation to Amazon. Those allegations are under investigation by the Pentagon’s Inspector General’s Office.

The Washington Post reported Thursday that the White House had ordered the review. The Post is owned by Jeff Bezos, the founder and CEO of Amazon.

“I’ve heard from folks in the administration, so I owe, as the new guy coming in, a fresh look at it, study it, make sure I understand all the different factors,” Esper, who took the helm of the Defense Department last month, told The Post in an interview. “I’m going to take a hard look at it. We’re not going to be making any decisions soon until I’m comfortable with where it is and . . . then we’ll look at what adjustments we need to make, if any.”

Republican lawmakers have urged Trump to hold off awarding the contract until the IG issues its findings. The concerns are related to DoD staffers who worked on the deal yet previously or subsequently worked for Amazon.

A bid protest complaint from Oracle, which had also bid on the contract, pointed to the involvement of former Defense Department employee Deap Ubhi, who worked at Amazon before joining the Defense Department in August 2016. Ubhi is now at Amazon once again -- working with Amazon Web Services, Inc. (AWS), the entity that handles cloud computing.

Oracle claims that Ubhi influenced the decision to grant a single contract. They also say he was involved in setting high standards for bidders that essentially limited the field to Amazon and Microsoft. Oracle and IBM, the only other bidders, both protested.

IBM, which had also been eliminated from the process, said in a statement to the Associated Press last month that it “has long raised serious concerns about the structure of the JEDI procurement” and continues to believe the Defense Department “would be best served by a multi-cloud strategy” involving multiple cloud systems operated by different companies.

A federal judge last month ruled against Oracle, which claimed the process was rigged to benefit Amazon. But last week, the judge in the case raised questions about the process, particularly the Pentagon's decision to award a single large contract. 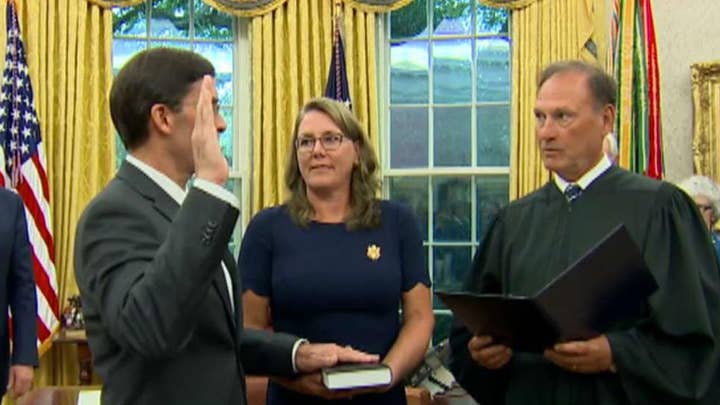 Sen. Marco Rubio, R-Fla., one of the lawmakers to urge the review, welcomed the Pentagon’s announcement.

AMAZON, PENTAGON ACCUSED OF SWAMPY DEALINGS OVER $10B CONTRACT

“The Department of Defense needs a cloud computing contract, but my concern is they put out a contract that only one company could win -- and that is Amazon,” he said.

Defense Department spokeswoman Heather Babb told Fox News last month that the department investigated allegations of conflicts of interest but ultimately found that the JEDI process was not improperly affected.

"While some potential ethics concerns were raised that have been referred to the DoD OIG, DoD has concluded that there is no adverse impact on the integrity of the acquisition process," Babb said.

But Trump said he wanted to take “a very long look” at the contract.

"I’m getting tremendous complaints about the contract with the Pentagon and with Amazon,” Trump, who has criticized Bezos over his ties to the Post, said when asked about the matter last month. "They’re saying it wasn’t competitively bid."

“I have had very few things where there’s been such complaining,” he said.