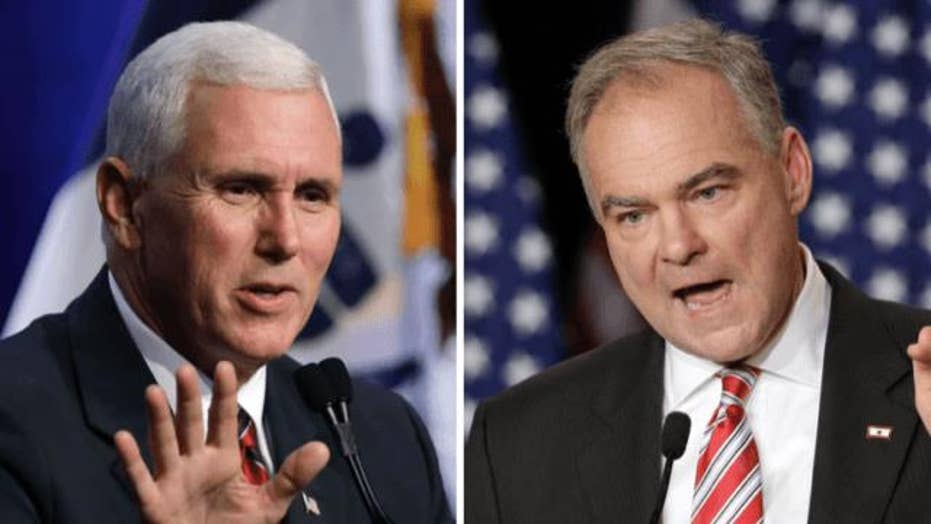 After a week of roiling presidential race controversies -- including the release of Donald Trump's tax returns and Hillary Clinton's unflattering portrayal of millennial voters -- their running mates meet Tuesday for a debate where they hope to steady their respective campaigns and launch their own offensives.

Democrat Tim Kaine and Republican Mike Pence so far have served in a traditional yeoman role, as Trump and Clinton occupy the limelight. Yet the two are seasoned politicians, ready and able to attack and parry on their nominees' behalf, at their only debate of the election season.

Pence, Indiana’s governor, on Monday hinted at his strategy -- attacking Clinton’s long political career and critiquing Kaine’s record as Virginia governor which Pence argues was marked by high unemployment and a tax-and-spend agenda.

“I can’t wait,” the 57-year-old Pence said while campaigning in central Virginia. “Clinton's record on foreign affairs alone could take up the whole 90 minutes. … I kind of hope we get to talk about our records as well because they’re just a little bit different. When Tim Kaine was governor, he actually tried to raise taxes by $4 billion in four years.”

By Tuesday morning, their prime-time debate at Longwood University, in nearby Farmville, Va., had its own controversy.

A new Republican National Committee video ad that hit Kaine for his legal representation of defendants convicted of violent crimes drew comparisons in some outlets to the infamous Willie Horton ad. That 1988 ad had hit Democratic nominee Michael Dukakis, the Massachusetts governor, over convicted murderer Horton committing violent crimes while on furlough from his life sentence -- but was criticized for being racially charged.

RNC strategist Sean Spicer initially tweeted a Roll Call article making the Willie Horton ad comparison, but then deleted the tweet. Spicer told Fox News on Tuesday that the RNC disagreed with the comparison to the 1988 ad.

It's unclear whether Kaine's criminal justice record will in fact emerge at Tuesday's debate.

The 58-year-old Kaine, a devout Catholic and Harvard Law School graduate, has said little about his debate strategy.

“It's intense, but I'm calm. Things work out the way they are supposed to,” he said after attending Mass on Sunday in Richmond.

Clinton said Tuesday she thought Kaine would have a “great” debate performance, before flashing the thumbs-up sign.

If Kaine’s debate rhetoric is anything like that on the campaign trail, he will likely focus his attacks on Trump and what he considers the Republican presidential nominee's acceptance of “bigotry, racism, xenophobia, anti-LGBT and anti-immigrant behavior” from supporters.

The focus of the debate is likely to stay trained on the presidential nominees themselves.

Trump campaign manager Kellyanne Conway told Fox News’ “Hannity” on Monday to expect a prepared and “feisty Mike Pence,” ready to challenge Clinton’s record and “hold her accountable for the failures of her policies as secretary of state.”

Wisconsin GOP Gov. Scott Walker has stood in as Kaine in Pence’s debate prep sessions, while Washington lawyer Robert Barnett has been playing the role of Pence in Kaine's preparations.

Kaine spent several days preparing in Raleigh, N.C., and in his hometown of Richmond, about an hour west of the debate site.

Close aides say Kaine has been studying “big binders” of details and also knows the debate is “about the top of the ticket.”

One aide also told Fox News on Tuesday that the prep sessions have included “a steady stream of black coffee, M&Ms and downtime with staff and friends to close each day.”

The Clinton-Kaine campaign has announced that Kaine has invited family and friends including the Rev. Jesse Jackson to the debate.

Trump, meanwhile, is taking heat over the details in newly published tax documents that allegedly show the nominee took more than $900 million in losses in 1995 that could have allowed him to avoid paying federal income taxes for as many as 18 years.

The Clinton campaign over the weekend was forced to defend the candidate’s remarks in a leaked audiotape from this winter in which she seemed to characterize young supporters of then-primary rival Vermont Sen. Bernie Sanders as children of the recession “living in their parents’ basement.”

That's particularly true in an election where the candidates at the top of the ticket are such outsized figures who have been in the public eye for decades.

While last week's first debate between Trump and Clinton drew a record-setting television audience of about 84 million people, the Pence-Kaine contest is expected to be watched by far fewer viewers.