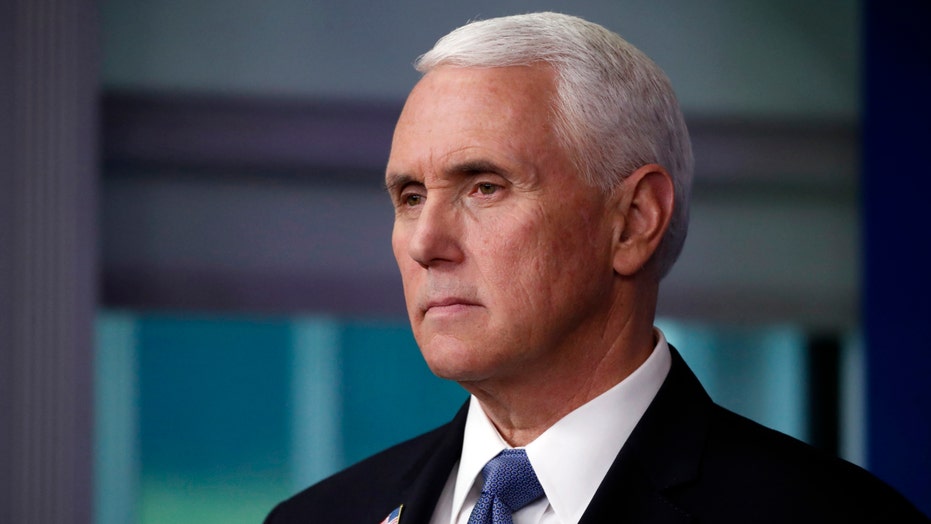 Vice President Pence came under fire for not wearing a face mask during his visit to the Mayo Clinic in Minnesota on Tuesday.

On April 13, the world-renowned medical center had announced a policy requiring all patients or visitors to bring their own face mask. The center said if patients or visitors did not have a face mask, they would be provided with one, to comply with guidelines from the Centers for Disease Control and Prevention (CDC).

The clinic tweeted -- then later deleted -- this tweet: “Mayo Clinic had informed @VP of the masking policy prior to his arrival today."

Pence addressed the controversy and told reporters that while he agrees with the CDC guidelines about wearing masks to contain the spread of coronavirus, he and everyone around him is tested for the virus regularly.

“When the CDC issued those guidelines, it was their recognition that people that may have it may prevent transmitting by wearing a mask,” the vice president said. “Since I don’t have it, I thought it would be a good opportunity to be here, speak to these guys and look them in the eye.”

When he was asked about the message it may send, Pence reiterated that he is tested regularly and the CDC says masks only prevent the spread of the virus.

Some Democrats took aim at the vice president over his decision not to wear a face mask.

“In Pence’s visit to the Mayo Clinic, he was trying to show us how 'tough' he is -- but just showed his arrogance, lack of concern for others, and vanity,” Rep. Tulsi Gabbard, D-Hawaii, tweeted.

“When you don't wear a mask, especially inside the Mayo Clinic, you are not being brave,” said Sen. Brian Schatz, D-Hawaii. “You are showing that you think the rules don't apply to you. And you are setting a dangerous example by ignoring experts.”

Video shows Pence appearing to be the only one without a mask when he met with a Mayo employee who has recovered from COVID-19 and is now donating plasma. He was also maskless when he visited a lab where Mayo conducts coronavirus tests.

Pence was also the only one not to wear a mask during a roundtable discussion on Mayo's coronavirus testing and research programs, with participants including Food and Drug Administration (FDA) Chief Stephen Hahn, top Mayo officials, Minnesota Gov. Tim Walz and Rep. Jim Hagedorn, R.-Minn.